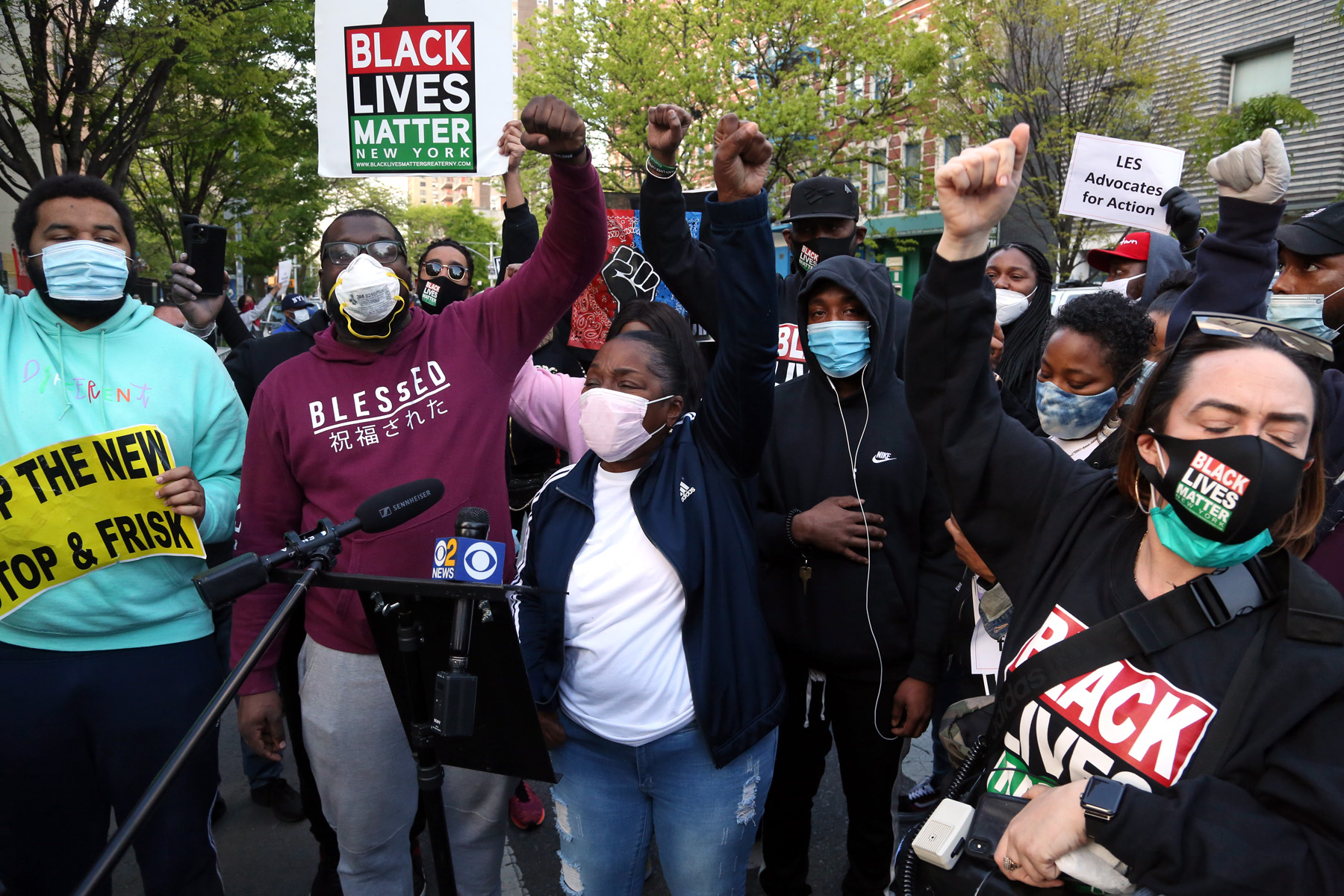 Reverend Kevin McCall, of the Crisis Action Center, in maroon sweatshirt, and Donnie Wright's mother, Donna Wright, to the right of him, spoke at the rally. (Photo by © Jefferson Siegel)

BY THE VILLAGE SUN | Shouting “F— the police!” Black Lives Matter activists rallied in the East Village Thursday afternoon, decrying the rough arrest of a man by cops on Avenue D on Saturday.

A video of the aggressive takedown that was posted online quickly went viral.

The protesters called for the arresting officer, Francisco Garcia, to be fired — and also jailed.

“The Police Department has a virus — and it’s worse than coronavirus,” one of the speakers declared.

“Give us liberty or give us death!” another exhorted.

The activists arrived in a caravan of cars and trucks outside the Police Service Area 4 station house, at E. Eighth St. and Avenue C. They had earlier visited several other police precincts around the city where incidents involving social-distancing enforcement also occurred this past weekend.

Police closed down the block of Avenue C for the rally and also closed Eighth St. at Avenue B. Officers and detectives, many of them in suits, stood in front of the station house, and were scattered around both sides of the block. A few police were also posted on the station house’s roof, keeping watch over the scene below.

Garcia is assigned to P.S.A. 4, whose officers typically patrol in and around local public-housing developments.

East Village District Leader John Blasco posted the video of the arrest, which happened on E. Ninth St., quickly afterward, voicing his incredulity at it.

As seen in the video, things get heated when Garcia and other officers are apparently trying to enforce social distancing among a couple of people. One man winds up getting thrown to the sidewalk and handcuffed.

Garcia then strides toward a bystander — a local man, Donnie Wright, 33 — and, while brandishing a Taser, orders him to back up.

“Don’t flex,” the officer warns him.

Wright then can be seen stepping up toward Garcia, who promptly slaps him in the face twice, slugs him in the ribs twice, flings him to the ground and drags him up onto the curb. In what looks like the most painful part of the arrest, the beefy officer then kneels on the prostrate Wright’s neck in his apparent signature move, a sort of Ultimate Fighting-style “control” position.

In a statement, police said that Wright, when ordered to back off, instead “took a fighting stance against the officer.”

Wright was initially charged with assault on a police officer and resisting arrest, but the Manhattan district attorney is not pressing charges.

Meanwhile, Garcia has been stripped of his gun and badge and put on desk duty pending an investigation.

Garcia has been sued seven times over the past six years, costing the New York Police Department more than $200,000 in settlements. In one of the incidents, he was accused of racially profiling a man before assaulting him, while in another he allegedly insulted a lesbian at a fast-food place, then, when she demanded his badge number, called her a “dyke.”

Also speaking at Thursday’s rally on Avenue C was Wright’s mother, Donna Wright, who the organizers said had come in from North Carolina. She angrily blasted police over her son’s arrest, which she has said left him “in pretty bad shape.”

Reverend Kevin McCall, of the Crisis Action Center in Brooklyn, one of the event’s main speakers, said Mayor de Blasio had called him earlier while the caravan was en route, but McCall said he was unsatisfied with the mayor’s words.

Public Advocate Jumaane Williams and his mother had ridden with the caravan earlier, McCall added.

The day after the arrest, the mayor condemned it, tweeting, “The behavior I saw in that video is simply not acceptable.”

With people now increasingly heading outside in the warm weather, activists are slamming the police and City Hall for what they call unequal enforcement of social distancing during the pandemic: Police politely offer face masks to white people who lack them, they say, but black and brown people are being treated roughly.

City Councilmember Carlina Rivera, who represents the East Village, was at Thursday’s protest outside P.S.A. 4, but she did not stand with the Black Lives Matter activists or give remarks during the press conference.

Rivera has called for an investigation into excessive use of force in the Avenue D arrest.

Along with 43 other New York City politicians, Rivera also has signed onto a joint letter urging the mayor and Police commissioner to stop having the police enforce social distancing, and instead have anti-violence and faith groups do it, with a person of color appointed to oversee the effort. Other signers of the letter include Manhattan Borough President Gale Brewer, City Comptroller Scott Stringer, state Senator Brad Holyman,  Assemblymembers Yuh-Line Niou, Harvey Epstein and Linda Rosenthal and Councilmember Keith Powers.