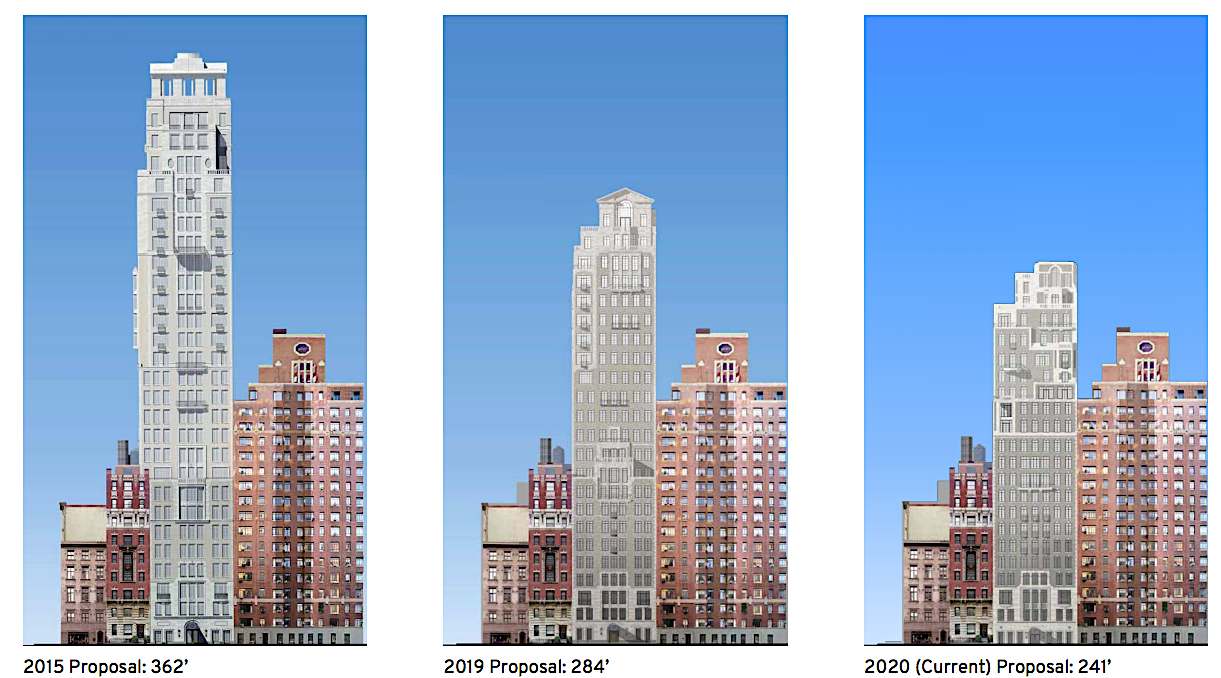 The design of the proposed tower at 14-16 Fifth Ave. has progressively shrunk but is still oversized.

BY THE VILLAGE SUN | In what might be seen as shades of things to come for the Soho and Noho historic districts if the mayor’s contentious 11th-hour upzoning plan is approved, the city has O.K.’d demolition of a landmarked Greenwich Village building for a luxury sliver tower.

Preservationist Andrew Berman on Wednesday accused Bill de Blasio of being a hypocrite after the mayor’s Landmarks Preservation Commission voted to approve the razing of a history-filled, landmarked building at 14-16 Fifth Ave., at Eighth St., to be replaced by a high-rise tower for the rich.

The building is located on the edge of the Greenwich Village Historic District.

“It’s incredibly disappointing that the Landmarks Preservation Commission would approve demolition of a landmarked 170-year-old structure connected to some of the most important figures in New York and American history,” Berman said. “And why? For a high-rise of third or fourth homes for the super-rich that will actually contain fewer units of housing than the modest five-story structure it’s replacing, which was emptied of its rent-stabilized long-term tenants to make this project possible.”

Yet, some L.P.C. members were clearly uncomfortable with the idea of destroying venerable, low-rise structures in the historic district to allow yet another luxury trophy tower.

“We are grateful for the highly unusual split vote,” Berman said, “and the five commissioners who spoke so passionately against allowing demolition, and the thousands of New Yorkers, scholars, academics, writers and preservationists who opposed this decision, as well as the elected officials who were part of this fight. It’s disturbing to know that under Mayor de Blasio the Landmarks Preservation Commission is no longer in the business of protecting landmarks but of approving their destruction.

“While we are glad that our advocacy led to a reduction in the height of the planned new tower from 367 to 213 feet, this still does not justify the destruction of this important piece of our history or the homes of so many New Yorkers by the predatory Madison Realty Capital,” he said. “Our mayor opines about our city’s lack of affordable housing. And then he approves demolition of buildings that contained rent-regulated, affordable housing for longtime tenants to make way for high-rise pied-a-terres for the super-rich. It’s the height of hypocrisy, and a knife in the heart of the soul of New York.”

Village Preservation had led the campaign to defeat the plan to demolish 14-16 Fifth Ave., two former townhouses built in 1848 by Henry Brevoort.

The group had generated thousands of letters in support of saving the buildings to city officials and had garnered support from prominent writers, scholars, academics and the Dutch government, as well as from Council Speaker Corey Johnson, Manhattan Borough President Gale Brewer, state Senator Brad Hoylman and Assemblymember Deborah Glick.

For more on the history of the building, click here and here.

For more information about the campaign to save the building, click here, and on the developer’s application for demolition and the new high-rise tower, click here.