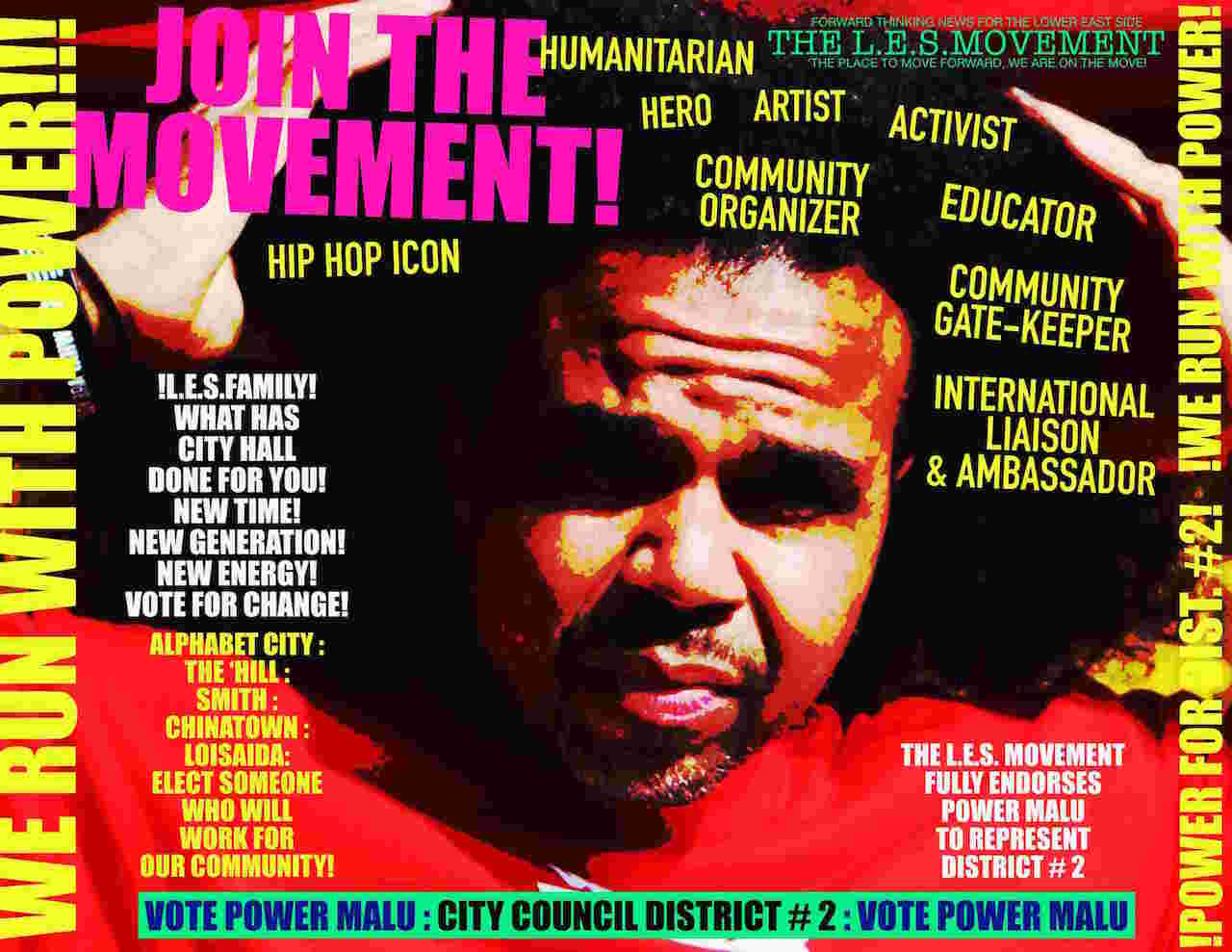 BY THE VILLAGE SUN | Power Malu is a lot of things: a hip hop icon who hosted MTV’s “Lyricist Lounge” in the early 2000s, a food-justice activist, an athlete and captain of the Bridgerunners, the director of special events and programming at the Overthrowing Boxing gym on Bleecker St. He’s a member of Why Not Care, a local group that gives out supplies to local families and aided Puerto Rico after Hurricane Maria.

But one thing Power is not — or at least not right now — is a candidate for City Council.

Locals have been eagerly trying to recruit the native Lower East Sider to run for the District 2 seat. Among them is Kevin Harris, a Baruch Houses native and advocate for full recognition of Lower Manhattan’s black history. Community concerns are not being heard, he charged.

“Absolutely,” he said. “It’s a big problem locally, hence protests against the East River Park remodeling, the destruction of the amphitheater.

“Local leaders don’t support the community, they sell it away,” Harris charged. “Why are so many rehab, drug and care centers all situated exclusively on the Lower East Side? We need significant change!

“Power is right now in the streets passing out food. People in the community talk to him. No more filters: We need people with direct access, not rhetorical, ongoing garbage about talking to someone else to get it done. Right now, people are without heat on the Lower — you see anyone helping to fix that problem?

“I vote for Power, at least he’s out there,” Harris declared. “He has heart, and City Council work obviously isn’t that hard and Power can learn on the job. Out with the old and in with the new. I run with Power!”

Power Malu has had cameos in hip hop videos, including in Digable Planets’ “9th Wonder (Blackitolism)” from 1994, at 1:30 minutes.

If Power decided to seek office, he would have no problem producing campaign fliers and posters; Harris, who runs a blog, L.E.S. Movement, has already designed several fliers — sporting catchy slogans, like “We Run With Power” and “We Have the Power” — hoping he will throw his hat into the ring.

However, as it turns out, Power won’t be following in the footsteps of Erin Hussein. A little more than a week ago, The Village Sun first reported that Hussein, the co-op president at Stewart House, at Broadway and 10th St., is challenging the incumbent, Carlina Rivera, in the June 22 primary election.

In an e-mail, Power told The Village Sun that, at least for right now, he plans to stick with his grassroots activism, which is where he feels his efforts are most needed.

“I am not running for City Council,” he said. “Many people have mentioned this idea to me but I’m not considering it nor am I interested in running.”

Michael Herrera of More Gardens said he, too, was among those trying to convince the L.E.S. activist to go for it and campaign for elected office. He feels Power has all the right stuff to be a local politician.

“He’s in the hip hop industry. He’s a great speaker,” Herrera said. “His fierceness, his leadership. He’s into food justice. He just put a plant-based community fridge in front of Overthrow. It’s vegan, the only one in New York City. He said, ‘It’s a rich street but the people out here deserve holistic food.'”

Alas, the only running Power will be doing is while wearing sneakers, as he does with the Bridgerunners when they race over the East River spans. In short, while the activist wants to be a check on power, he wants to keep being Power.

“He wants to use his power and influence to hold people running for City Council accountable,” Herrera said. “He wants to be that bridge.”

Herrera said people have not given up looking for another candidate to challenge Rivera. He said they’re now trying to persuade Jasmin Sanchez to run. Sanchez ran in the District 2 City Council primary in 2017.

For more on Power Malu, see Clayton Patterson’s July 30, 2020, feature article on him in The Village Sun.