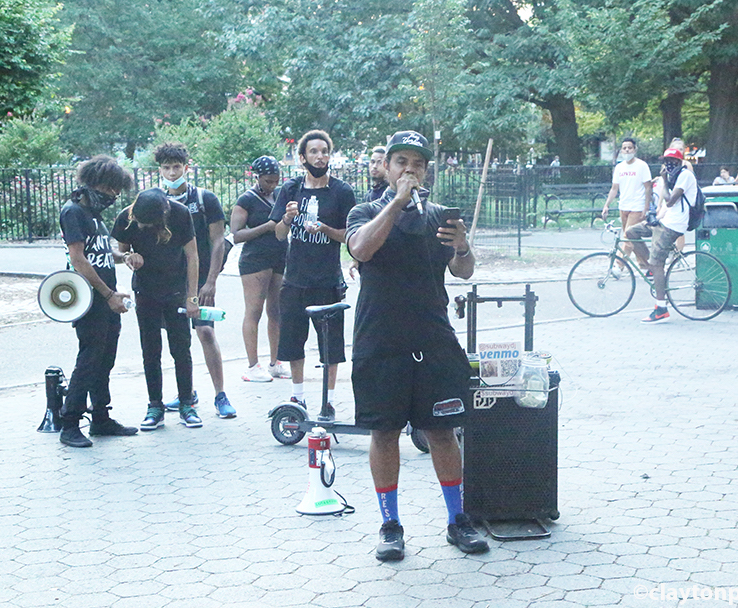 Power Malu leading a protest for social and racial justice in Tompkins Square Park on July 28. (Photo by Clayton Patterson)

Lower East Side has the Power…to create change

July 30, 2020
BY CLAYTON PATTERSON | Power Malu is a man on the move. The first time I met and photographed him was in the ’90s. A couple of The Fellas who sold Hell Raiser heroin brand on Ludlow St. ran breathlessly to my place knocking on the door. I had to go to the block and photograph this guy who is on MTV. I met this young man called Power with his large lion’s mane of afro-styled hair. Who is this guy? And then slowly over the years I learned more.

Power is a generous person who tries to engage everyone in his projects, which are many. Early MTV, Power and Mike Saes created the BridgeRunners Club, and like a number of his projects, it has gone worldwide. Power is the entertainment/community director at NYC Overthrow Boxing, at 9 Bleecker St. He founded Artists-Athletes-Activists (AAA), an organization that uses its platforms to bring awareness to issues that deal with health, fitness, wellness and social justice in marginalized and underserved communities.

Power joined with Marty Martin and Lilah Mejia to create Why Not Care, a community organization that gives away hundreds of expensive school supplies to needy students. Because of how much devastation Puerto Rico suffered after Hurricane Maria, Power and Dennis Flores, of El Grito organization, have put their shoulder to the wheel, with much organizing, and were able to gather tons of needed supplies to give to Puerto Rico. Power, Marty and Lilah are NY ACKER recipients.

On Tuesday night, Power led a protest march to Tompkins Square Park and asked me to be a speaker. I was honored to support Power and his activism. Later I asked Power what his goals and objectives are with these marches.

Here is Power in his own words:

“We are activists and organizers from around the city that have joined together but purposely do not have an organization name because we believe this movement is bigger than just one person or one organization.

“This is truly a movement for the people by the people. This was Day 60 of protesting every day in NYC. This is a youth-led revolution that started meeting as a collective at Washington Square Park at 5 p.m. two months ago.

“Since then we’ve protested and marched in various communities in different boroughs throughout the city but our main spot has been Washington Square Park.

“The community has grown to know the protest marches we do as ‘The People’s March.’ We are a very organized group that shuts down streets and highways to bring attention to the unjust system that continues to prey on our communities of color.

“We disturb the peace during our protests but we are nonviolent. We do not engage with the police or any outside agitators. This is a long road so we must preserve our energy to put it toward keeping the pressure on elected officials and pushing legislation that will benefit the people instead of big corporations.

“We do more than just protest on the streets. We actually do educational workshops during our protests and marches and are working on developing food programs and neighborhood cleanups in our communities. We converse about social justice and local, state and federal branches of government, where we must dismantle systemic racism and white supremacy.

“We will create the change we want to see in the world. This will be our legacy. We will make history. These ripples will turn into the waves that will make this system of oppression come crashing down.”