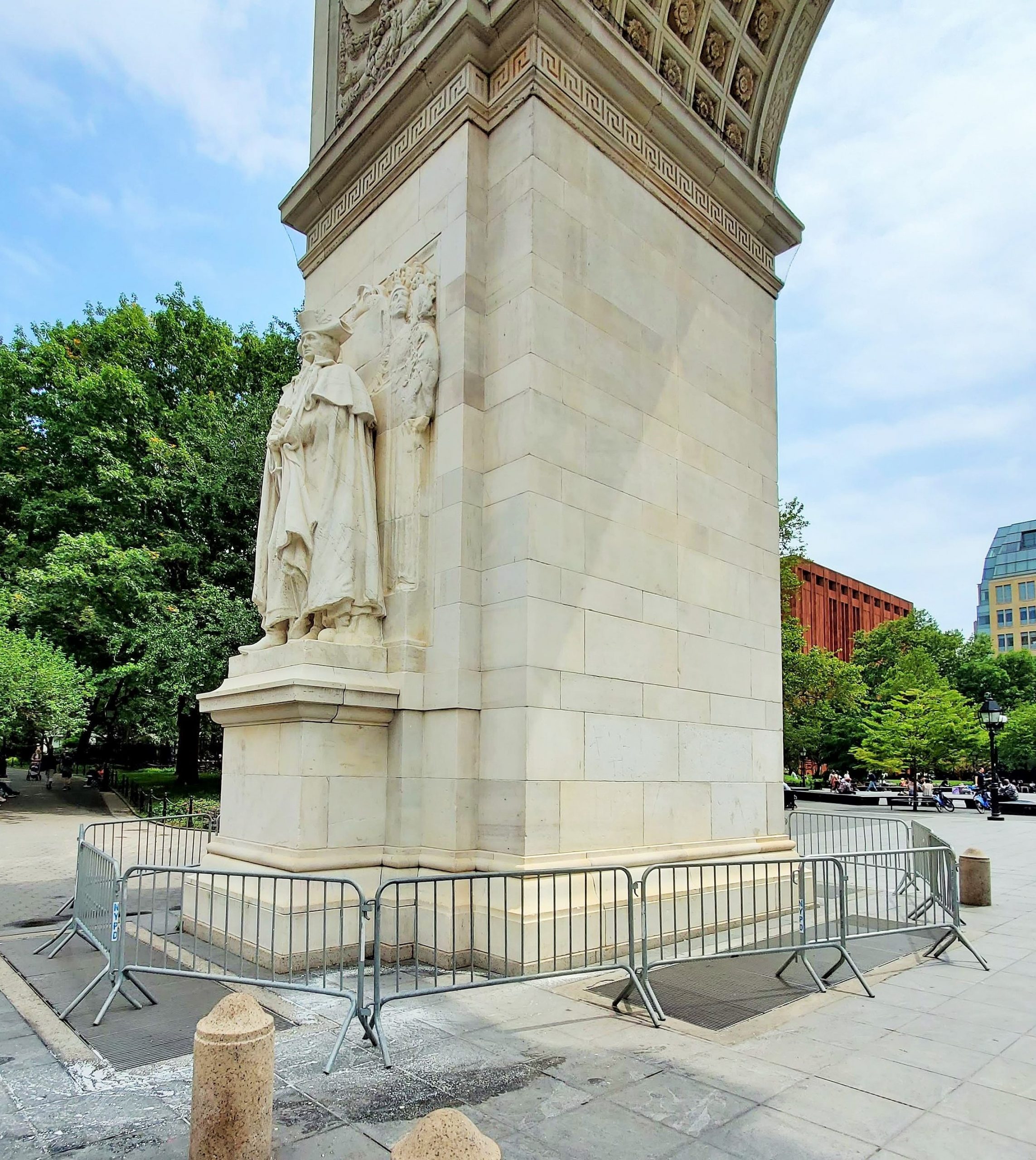 In March, police removed the metal fences that had been protecting the Washington Square Arch from vandalism. But as the historic marble arch has started to get hit by graffiti again, the fences are now back in place. (Photo by The Village Sun)

BY LINCOLN ANDERSON | Updated June 15, 6:30 p.m.: This is gonna be a big one. There might be some fireworks — and, no, not in Washington Square Park, as happens nightly nowadays, but about the park.

The Sixth Precinct is holding an emergency meeting on Wednesday to discuss the state of the Greenwich Village landmark park. The meeting will be at Our Lady of Pompeii Church, at 25 Carmine St., at Bleecker St., starting at 6 p.m.

In an e-mail notice to the community, Captain Stephen Spataro urged people to attend.

“Get the word out,” he wrote. “[This] is your opportunity to have your voices heard. We are inviting stakeholders, the media, elected officials and Community Board 2. Our Chief of Department [Rodney Harrison] might be in attendance as well.”

The meeting follows the by-now well-known “fed up” anonymous open letter from May from area residents to local politicians demanding the enforcement of the park’s curfew and other regulations.

Three weeks ago, police fenced off the park’s northwest corner. The drug users have since relocated to the benches along the park’s east-west walkway west of the fountain plaza.

Dorsey Adler, the director of the Central Village Co-op and Condo Alliance, which represents 16 co-ops and condos —  a total of more than 3,300 apartments — recently issued an e-mail call for “immediate actions” on the park.

Referring to the “fed up” letter, Adler writes, “I and the CVCA members are in full agreement with the…list of complaints having to do with the condition of our neighborhood in terms of security, safety, health and a myriad of disturbances that have been occurring and recently intensifying… .

Another local resident recently circulated an outraged e-mail stating, “We have been forced to accept lawlessness and violent activities as the norm for WSP and Greenwich Village and it is NOT okay. … The park has become a cesspool of criminal activities which spills over into our streets. The park is overrun with visitors whose only intent is to wreak havoc and occupy the park for illicit activities. Last night a group of men climbed up on the statue of Washington and graffitied vulgarities all over the arch. There are nightly fireworks at all hours of the night, in all parts of the crowded park. Drug use, drug sales, theft, physical abuse and prostitution are blatant. ATVs, dirt bikes and motorcycles regularly rip through the park.”

Monday afternoon, the upcoming meeting was the hot topic among residents entering One Fifth Ave., just north of the park.

One woman noted she was very impressed by a June 11 op-ed in the Daily News by Brandon del Pozo, the former commanding officer of the Sixth Precinct from 2011 to 2013.

Headlined “The wrong way to police Washington Square Park: How things got so bad,” del Pozo’s piece argues that consistent enforcement of the rules has been lacking.

“Washington Square Park is a place that will always get out of control if you let it,” the former C.O. writes. “Where things stand now seems to be the worst of all worlds. The conditions in one of the world’s most beloved urban parks have become intolerable for people who want to enjoy it in more understated ways, and for the people who live near it and need to sleep at night. The people who were in the park until all hours pursuing their uses of it had come to believe it was okay, and the city gave them little reason to think otherwise. The police went from years of moderate enforcement to a period of little or no enforcement at all, then to a night of force and arrests.”

The “night of force and arrests” he refers to occurred on Sat., June 5, when a large detail of riot-helmet-wearing police moved to clear the park for the new 10 o’clock weekend curfew, but a group of 100 young park users resisted them. There were 23 arrests.

Del Pozo argues that the park now needs to be “renormed” through transparent and consistent, though “not draconian,” policing.

The One Fifth Ave. resident, who requested anonymity, said of del Pozo’s op-ed, “He writes really well about the competing interests in the park in an intelligent, articulate and understanding way.”

The woman said that before the COVID pandemic hit, Washington Square Park was “pretty normal.”

Now, she said of the park at night, “It’s loud. And our bedroom is right across from the park.”

She said, though, that she understands it’s the Village.

“I get it, I don’t have to live here,” she said. “If I wanted total quiet, I could live in the country.” However, she added, “The amplified music is not allowed. Those are the rules.”

The resident said she supported the earlier 10 p.m. curfew that was in place for two weekends, but was reportedly dropped last weekend. But she and others said the park’s longstanding 12 a.m. curfew should now be enforced.

“The law is the park should be closed at midnight,” she said.

A 13-year resident of the building, she noted she had volunteered in the park the day before, doing a morning cleanup.

“I am a big believer in Gandhi — be the change you want,” she said. “It’s not enough to complain.”

For his part, a neighbor said he was furious at David “Shaman” Ortiz, a Queens man who has been organizing late-night raves and boxing matches in the Village park. Ortiz, who is a deejay, recently mocked local residents who complain about the rowdy park as “Kevins” and “Karens,” telling them to move if they don’t like it.

“This is my response to the residents,” Ortiz, 28, told the New York Post. “If you have an issue with amplified sound and you live in the Downtown area, you live in the Washington Square Park area, then you should move. I’m not letting anybody steal our joy.”

“Why can’t we all do it at his house and not here?” the Villager retorted. “Who gives this guy the right to think he can do this? We need to get 100 or 200 people, show up at his door, stomp on his vehicles, relieve ourselves on his place. We should have a boxing match on his lawn, and just do everything that he does here. Who the f— is he? ‘The Shaman,'” he scoffed.

“Don’t give him any power,” the woman interjected, adding, “I’m not moving.”

Like others, the man was confused about where the park’s curfew stands.

“What happened to the curfew?” he asked. “For two weekends it was 10 p.m. Then there was no curfew. Then I heard it was midnight. But then I heard [a stabbing] in the park at 3 a.m.”

In fact, the New York Post reported two men were each knifed in the leg this past Sunday morning around 2:15 a.m. when a dispute broke out among a group of people dancing in the park.

The male One Fifth Ave. resident predicted it would probably sadly take some serious incident involving a “rich kid” from New York University before the authorities start enforcing the rules at the Village park again.

“The old people that live in the neighborhood, they’ve been cooped up during coronavirus, too,” he said. “They want to use the park. The Shaman should displace them? Give them some respect.”

Monday afternoon around 1:30 p.m. the park was calm, at least for periods of time. But the tranquility was broken whenever a drummer seated at a full drum set south of the fountain started to pound away. During past summers, Parks Enforcement Patrol officers, sometimes armed with sound guns to measure decibels, would explain to drummers about the need to keep the volume at a reasonable level.