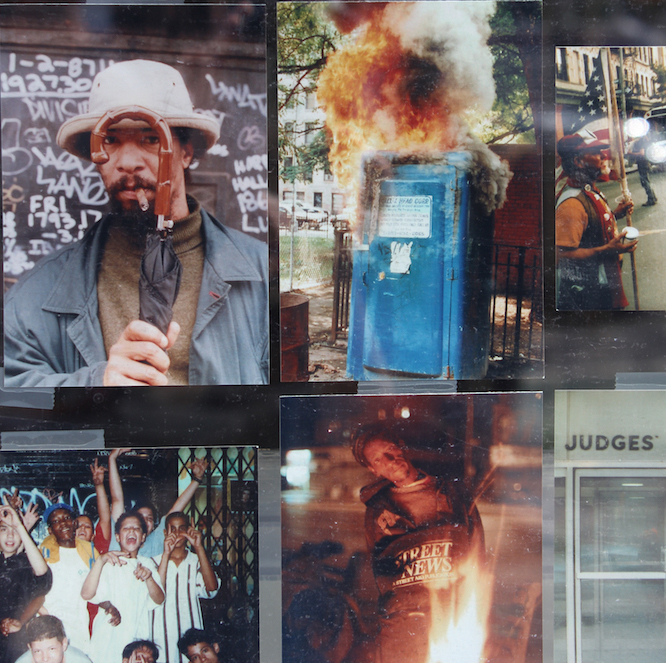 BY LINCOLN ANDERSON | If you want a glimpse into what the gritty and colorful Lower East Side looked like in the 1980s and ’90s, walk by the windows at Printed Matter / St. Mark’s, on the corner of Second Ave.

You’ll find taped up there 300 of documentarian Clayton Patterson’s neighborhood photos. They’re snapshots into another era, from decades ago. And yet many feel as if they could have been taken yesterday.

The shots were assembled by Patterson’s friend Gryphon Rue, an artist, musician and curator working across disciplines. Patterson gave Rue rare access to his voluminous photo archive, setting him loose to pick whatever he wanted to use.

The resulting exhibit, “Beauty Mark: Clayton Patterson,” went up on March 10 and runs through April 25.

Some of the images’ running themes include gentrification, riots, old storefronts and police brutality. On the other hand, some shots humanize the cops, showing them in light moments and unguarded poses. In one image, an officer points an old-school Polaroid camera back at Patterson.

Many of the photos were snapped in front of the door a.k.a. “The Door” of the documentarian’s Essex St. building. (Due to all of the tags on it by local graffiti writers, the door also became known as “The Wall of Fame.”)

In an era before digital photography, Patterson would then tape up the developed prints in the place’s ground-floor window in an ever-changing display that became known as “The Hall of Fame.”

Inside the Printed Matter bookshop, there are also three portrait-size photos of drag queens from Patterson’s Pyramid Club series.

“Clayton Patterson’s photo archive of the Lower East Side is a living treasure that plays by its own rules and has its own logic,” Rue wrote. “Paddling through can be hairy. The search felt like punching air holes from inside a cardboard box, or digging through the pockets of a ghost. How does one find order in an avalanche of souls?

“Clayton gave me permission to dive in, flail for a while. After mapping the cavernous regions, I constructed two groups of images spanning 1985-1999 for the windows of Printed Matter / St. Marks, titling the creation “Beauty Mark”: a plunge into the honest-to-God beauty, ugliness, glory, dignity, innocence, wisdom, sexiness, sweetness, danger, decency, wisdom, brutality, joy, love, warts-and-all of Clayton’s L.E.S. It’s a place that demands lifeblood and honesty, a keeper of the beating heart of one of the most complex, eccentric, diverse areas of NYC.

“All the faces, the stories in the eyes, from skeptical, to wakeful, stricken with emotion, are as widely varied as there are types of people,” Rue said. “We can see the moments where souls connected. Souls were saved. … Dress, fashion, the youth can tell you the year and season just by the sneakers.

“Protests in Tompkins: ‘STOP WAREHOUSING APARTMENTS’ … ‘GENTRIFICATION IS CLASS WARFARE. FIGHT BACK!’ … ‘THE ONLY GOOD RACIST IS A DEAD RACIST … EDUCATE OUR CHILDREN…DON’T PUNISH OUR PEOPLE!’

“Little did we know how prophetic the slogans were.”

Johanna Rietveld, the bookstore manager at Printed Matter / St. Mark’s, said the exhibit has been a hit, connecting with people, including locals who personally know the photo subjects.

“It’s been really nice to see how it draws people in and people spend a lot of time looking at it,” she said. “I’ve had a lot of people recognize old friends, people they know. People come in and say, ‘Who took the picture?’ and that Clayton took a picture of them and ask if we have one of them. People saying they haven’t seen people for 20 years and wonder where they are now.”

She said there has been a lot interest in a photo of a man sporting a black beret named Twilight.

“Quite a few people recognized him, hadn’t seen him forever,” she said.

According to Rue, there are no photos of the exhibition online.

All of the images in the windows are for sale for $50 each. Patterson will provide high-quality 3.5-inch-by-5-inch scans of them, signed on the back. Turnaround time to get the signed images back from Patterson is one week. These are an “open edition.”

It’s not clear yet if the three portrait-size photos — high-quality photo prints — of the drag queens inside the store will be for sale. They are a limited edition of seven each.

Patterson and Printed Matter will share in any proceeds. Rue is not getting anything. For Patterson, it’s not about the money anyway.

“Printed Matter is a place that I support,” he said. “Gryphon Rue is a brilliant musician.”

Patterson noted that Rue played the saw at a show of the documentarian’s work at the HOWL! Happening gallery, on E. First St.

As for Twilight, Patterson remembers him well.

“He did leatherwork,” he recalled. “He was from the Caribbean. He ended up on the cover of one of the Rolling Stones albums — three guys sitting together on a stoop on the Lower East Side. They shot it on St. Mark’s. They set it up, with Mick Jagger. … Of course, they always set those shots up.”

As for what happened to Twilight, Patterson said, “I’m not sure. He’s one of those guys that disappear.”

But his photo by the L.E.S. documentarian remains.