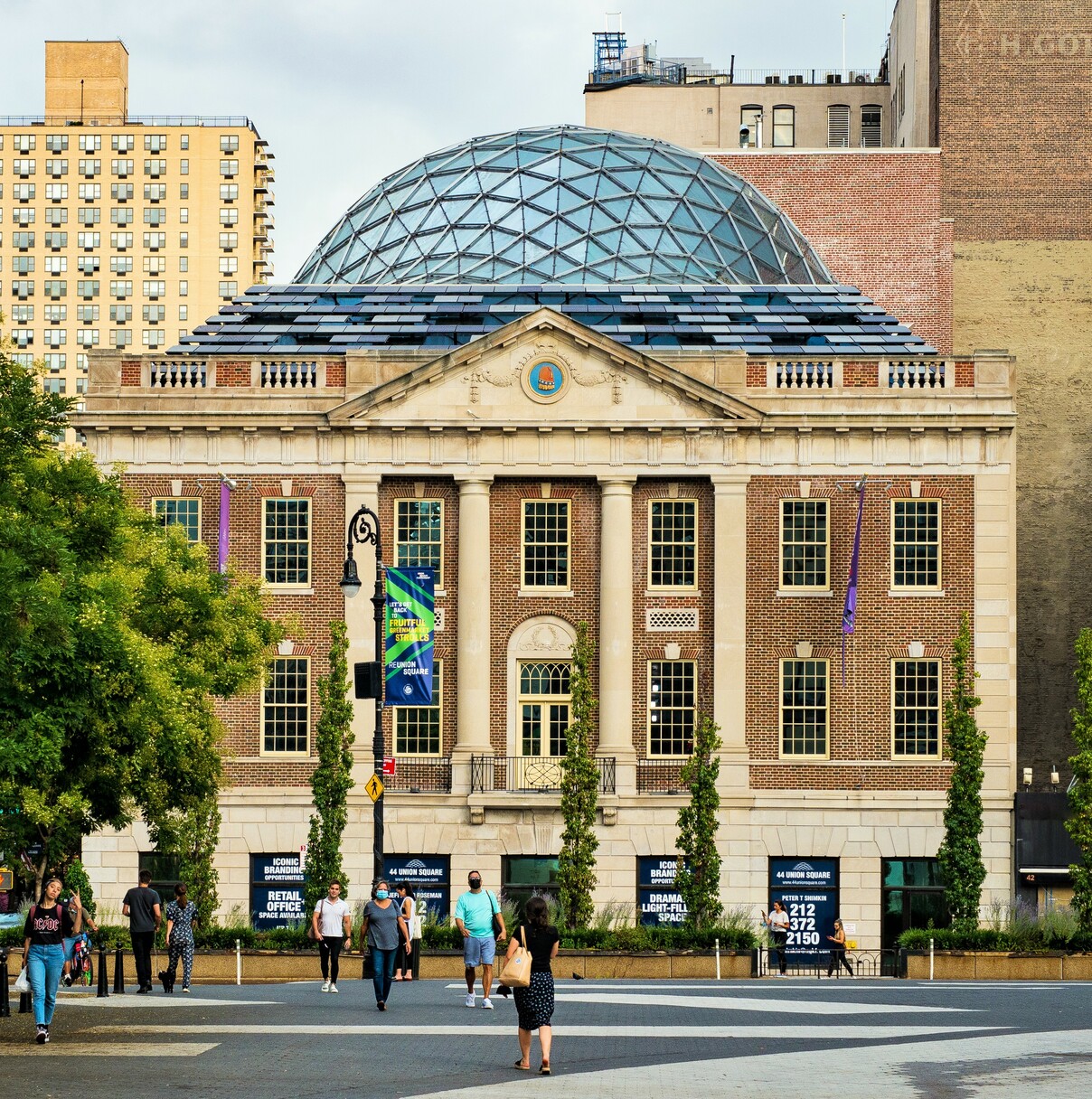 The new dome atop 44 Union Square East is meant to evoke a tortoise shell, a symbol of the Lenape tribe. By the end of the year the building will have tortoises and turtles for sale as pets.

BY MARY REINHOLZ | Once home to a symbol of political corruption, the bloodthirsty Tammany Tiger, a historic building on Union Square East will be filled with hamsters, birds, snakes and frogs — plus a brand-new pet hospital.

Petco, the national pet supply and wellness chain that provides a multitude of services, including dog grooming and the sale of small animals, has signed a multiyear lease for extensive space in the former Tammany Hall headquarters building on Union Square East.

The lease for 30,000 square feet with Reading International will bring a Downtown Manhattan branch to three floors of the renovated former Tammany Hall headquarters, according to New York Petco sources and news reports.

The historic Tammany building was recently topped by the addition of a new, massive, glass-and-steel dome designed by BKSK architects and marketed as 44 Union Square East by the Park Avenue Newmark brokerage. However, the building has been vacant since New York City became the epicenter of the COVID-19 pandemic.

The structure’s pricey makeover over four years forced out the Union Square Theater and the New York Film Academy, two long-term tenants, plus four commercial storefronts on Park Avenue South, including a deli and liquor store.

A San Diego-based retailing giant, Petco is expected to relocate its store currently at 860 Broadway, at the northwest corner of Union Square, across the square to the spruced up seven-floor Tammany Hall edifice at the end of this year,  taking over the ground-floor level, the cellar and the second floor, according to three New York Petco staffers.

“That’s the plan and everybody is excited” about the move, said Michael J. Jiminez, an assistant manager at the Petco branch at 860 Broadway, itself a notable building on the corner of E. 17th Street. It served as one of the locations for Andy Warhol’s famed Factory studio from 1974 to 1984.

Jiminez noted that the forthcoming move will relocate “all” of the store’s some 50 employees, its pet products and its small animals for sale — like hamsters, rats, fish, birds and reptiles — to Tammany’s landmarked onetime political shark tank at E. 17th Street and Park Avenue South, a little more than a block away. Services at the store will also continue those from a separately owned outlet, Just for Dogs, part of a chain based in Irvine, California. Just for Dogs prepares fresh special meals for canines daily and offers treats and special foods for disabled dogs.

The Petco branch will also maintain space at Tammany for Kitty Kind, a feline adoption service, Jiminez said. In addition, he noted that the branch will establish a “pet hospital” at its new site.

“We’ll announce a grand opening,” he told this reporter of the planned pet healthcare facility.

Meanwhile, Petco’s corporate headquarters in San Diego has yet to confirm the leasing arrangement with Reading International, a real estate and entertainment conglomerate, despite repeated requests for comment from The Village Sun. Reading operates live theaters and moviehouses worldwide, among them Downtown venues such as the Orpheum Theatre on Second Avenue in the East Village (“Stomp”) and Minetta Lane Theatre in the West Village.

Margaret Cotter, Reading’s executive vice president of her family-run firm, heads its real estate division and the subsidiary, Reading Tammany Owner, LLC, which owns Tammany. Cotter purchased Tammany Hall in 2001 from Local 91 of the Ladies Garment Workers Union, which had owned it since 1943.

Cotter had no comment last week on the impending arrival of a Petco store at the address but previously announced in early February the leasing of the three floors of Tammany space to an “international retailer,” though without mentioning Petco’s name. She did not disclose any other prospective tenants, but made it plain that about 43,113 more square feet covering four floors at Tammany were still available for commercial tenants.

“Signing this long-term lease with a strong credit retailer is an important milestone for our 44 Union Square development and is a testament to the resiliency of New York City and the desirability of Union Square as a key and vibrant location for tenants,” Cotter stated in a press release. “We are delighted to make this announcement and we look forward to completing the leasing of the remaining upper four levels of the building in New York City, which continues to be one of the world’s most dynamic cities for commercial real estate.”

Andrew Mandell, a vice chairperson and principal of Ripco brokerage in Manhattan, represented Petco in the transaction with Reading. However, Mandell said in an e-mail that he could not comment on the lease, noting that Petco is public and that only Petco could discuss the deal. It has been touted as the largest commercial real estate deal in New York over the past year, although terms are unclear. Asking rents were reportedly $450 per square foot for the neo-Georgian colonial building’s ground floor, $125 per square foot on the second floor and $100 per square foot on the basement level.

The reconfigured space was formerly an auditorium where the legendary Democrat Franklin Delano Roosevelt spoke as New York governor when Tammany’s last clubhouse was dedicated in 1929. (F.D.R. later turned against the patronage mill with reformist Republican Mayor Fiorello La Guardia.) The newly added, award-winning, glass-and-steel dome was designed to emulate the shell of a turtle, a religious symbol of the Lenape Indian nation, whose long-ago Chief Tamanend inspired the name for Tammany Hall in the 18th century when the political organization first began.

Reading’s renovation of the red-brick and limestone building was financed by a $55.7 million construction loan from Ozarks Bank and Fisher Brothers. Construction on the makeover overseen by contractor CNY created congestion on E. 17th Street between Park Avenue South and Irving Place in Gramercy. Several tenants on a block of brownstones received concessions on their rent, according to R.E.M. Residential, the managing agent. (Full disclosure: This writer lives on the block but did not ask for a rent concession).

Tammany’s new dome was contentious, with Cotter winning approval to proceed with its construction after a larger version was rejected by the city’s Landmarks Preservation Commission.

The dome in both sizes was opposed by the late Gramercy preservationist Jack Taylor, who called it “inappropriate” for the building’s original design. Taylor, who died at 93 in 2019, was widely considered a driving force behind the landmarking of Tammany Hall and other historic New York buildings in the city.

Taylor was a member of the Union Square Community Coalition, which also fought for the landmarking designation for Tammany. He told this reporter that the property, built in 1929, was designed to emulate Federal Hall on Wall Street. He said the Union Square building’s federal Colonial architectural design was meant to “give it some respectability at the height of the Tammany Club scandals.”