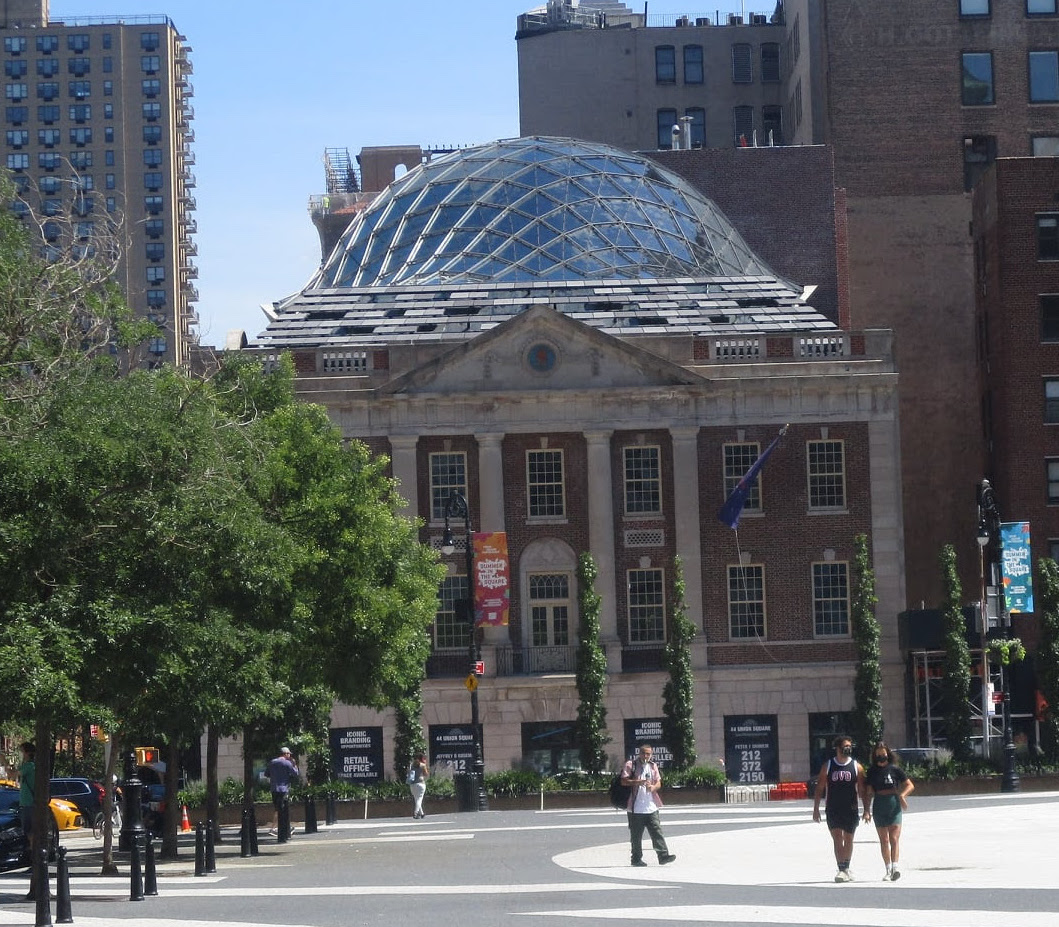 The new dome atop the former Tammany Hall at E. 17th St. and Union Square East is an homage to the Lenape chief from whom the infamous Democratic political machine took its name. (Photo by Mary Reinholz)

BY MARY REINHOLZ | After four years of work, plus stoppages due to COVID-19, the renovation of historic Tammany Hall is now nearly complete with the installation of a massive three-story glass-and-steel dome offering sweeping views of northeast Union Square.

The legendary building, once the Manhattan headquarters of a corrupted Democratic Party machine in the last century, has been expanded to roughly 73,113 square feet of rentable space, according to owner Reading International. Real estate agents have the unenviable task of finding commercial tenants or a single flagship renter for the landmarked neo-Georgian colonial during a pandemic. Their signs at the site on the corner of E. 17th St. and Park Ave. South tout “iconic branding opportunities” and  “flexible sizes” in retail and office space.

Slack Technology, a software messaging firm, had considered leasing all the Tammany space for its primary New York office. But Slack, which now has a sixth-floor office at 436 Lafayette St., ended negotiations early this year.

Newmark, Knight and Frank, the Park Ave. brokerage that had been in talks with Slack, is marketing the now gentrified Tammany as 44 Union Square East. A Newmark spokesperson expressed optimism that other prospective clients will come along, noting that companies like Amazon have “doubled down” on staying in New York.

“We expect 44 Union Square East will continue to appeal to any corporate, tech or flagship retail tenant who is looking for something unique and special,” he said later in a prepared statement.

Others say that Reading International, a real estate and theatrical company, faces daunting challenges to lease the high-profile property in a city still ravaged by the coronavirus and a devaluation of commercial real estate as businesses flee New York.

“There’s a lesson, in this: You shouldn’t mess up an individual landmarked building on spec,” said Simeon Bankoff, executive director of the Historic Districts Council in the East Village. Bankoff joined the late Union Square activist Jack Taylor in opposing the dome on Tammany at hearings of the city’s Landmarks Preservation Commission. They both contended the addition was “inappropriate” for the building. The commission approved the dome for landmark designation in 2015 after rejecting a larger version the year before.

“They put the dome on top of the building even though they didn’t have an anchor tenant who demanded a dome,” Bankoff continued during a phone conversation with The Village Sun. “They were caught flat-footed by the downturn of commercial real estate in New York. So here we are four years later. I’m sorry if they can’t rent out that space, but whose fault is that?”

The contentious piece was designed by Todd Poisson of BKSK Architects to  emulate the shell of a turtle, a religious symbol of the Lenape Indian nation, whose long-ago Chief Tamanend inspired the name for Tammany Hall in the 18th century.

The building was  purchased in 1943 by an affiliate of the International Ladies Garment Workers Union, which named the august auditorium after F.D.R. (Full disclosure: This writer lives down the landmarked block from Tammany’s original address on the street at 100 E. 17th St.)

Margaret Cotter, a vice president of real estate for Reading and a major investor, purchased Tammany in 2001 from Local 91 of the ILGWU. By early 2016, she had evicted prominent tenants from the building, like the Union Square Theater and the New York Film Academy, plus four storefronts on Park Ave. South, to make way for the new retail development.

Cotter is president of Liberty Theatres LLC, a Reading subsidiary that owns the Orpheum Theatre of “Stomp” fame in the East Village and the Minetta Lane Theater in the West Village. She was unavailable for an interview.

Michael Buckley, a principal in Edifice Real Estate Partners, based in Hell’s Kitchen, worked with Cotter in marketing the property and obtaining clearances for the Tammany makeover from city agencies and Community Board 5. He had projected the work would be finished in 2018. Buckley said Cotter and her father had long envisioned transforming the red-brick-and-limestone building.

“It was an idea they conceived many years ago,” he said in a telephone conversation. “Work started the first quarter of 2016 and took longer than expected. The pandemic didn’t help,” added Buckley, who is no longer involved with the project. “There were a lot of unknowns.”

Jennifer Falk, executive director of the Union Square Partnership Business Improvement District, believes that the building will attract renters despite the pandemic.

“The Union Square-14th Street neighborhood is well-positioned to rebound quickly from the impacts of the pandemic based on its key advantages,” she said in a statement. “Union Square is a true 24/7 mixed-use neighborhood with a 2-to-1 ratio of employees to residents. We have a robust network of transportation options, and our world-class Greenmarket and existing retail and culinary mix drives foot traffic to the area. Any potential office or retail tenant would be well-served to jump on this once-in-a-generation opportunity at the historic 44 Union Square.”

Reading issued a statement last week noting that the city had halted “nonessential construction” in March of this year when New York was at the epicenter of the COVID-19 outbreak. Work on the building resumed July 1, though, according to Reading, “The construction of the improvements necessary to obtain a core-and-shell temporary certificate of occupancy were substantially completed prior to the shutdown.“

Dennis Prude, vice president and field director of CNY Group, the construction management team at the site, said in an e-mail, “We are currently aiming for a mid-September timeline for  a temporary certificate of occupancy (TCO),” a document that could help lure tenants to Tammany in an uncertain time.

Securing the massive dome atop Tammany’s roof was one of many challenges for construction workers at CNY Group, Prude said.

“Logistically speaking, the structure’s location at the corner of Park and 17th posed one of the great challenges to the overall process,” he noted. “In terms of construction, our biggest obstacles were the fabrication and the erection of the dome, but fireproofing also proved to be a challenge, as well.”

Ken Colao, president and founding principal of CNY Group, said key technical issues for the team included constructing the foundation for the temporary structural towers “immediately adjacent to Con Edison’s high-pressure steam line running through Union Square and keeping the landmarked facade weatherproofed and stable during detachment, demolition and until the new concrete structure was built.” He described putting up the dome as “another obstacle.”

Andrew Berman, executive director of Village Preservation (formerly known as Greenwich Village Society for Historic Preservation), said that Tammany Hall was out of his area so he never has formally weighed in on it. But he noted that Jack Taylor, “the driving force behind getting Tammany Hall landmarked, was not happy with this dramatic renovation approved by the Landmarks Preservation Commission.”

Berman himself regards the makeover as part of a pattern in recent years, as he put it, “where the city, on one hand, landmarks a site and then, on the other hand, is willing to allow dramatic changes to those sites.”

The preservationist recalled how construction workers at Tammany seemed to demolish “the entire building except for the [landmarked] facade. That’s a significant change when they just leave a thin line of brick,” he said. “I would rather they took a more nuanced approach.”

Berman, however, didn’t seem to have any objections to the dome, which radiated lavender light on a recent night, like other buildings in New York City, commemorating Aug. 18 as the 100th anniversary of Congress ratifying the 19th Amendment, granting women the right to vote.

He also believes Tammany Hall is a significant building, noting, “It’s important historically and it helps to define Union Square as one of the great public spaces in New York.”