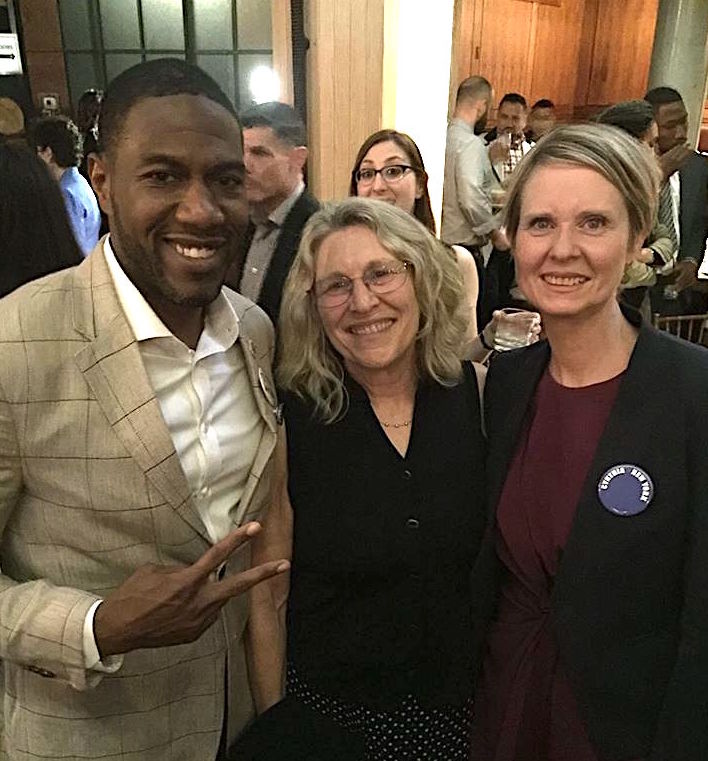 Penny Mintz on her run for Democratic State Committee

BY PENNY MINTZ | Voters in Manhattan’s 66th Assembly District, which runs from roughly 14th St. on the north to Vesey St. in the south, are already voting by mail and in early-voting polling stations in this year’s primary election.

One little-known race is for membership in the Democratic Party State Committee, the governing body for the party in New York State. This party position appears only in the primary and only if there is a challenger.

For 23 years, Rachel Lavine has been given the position when the local Democratic clubs garnered the 500 petition signatures needed to make her a candidate. With no one running against her, the position never appeared on the primary ballot.

Two years ago, I tried to challenge the present member. You may have spoken to me, Penny Mintz  (“like 1-cent candy” was my proffered memory aid). I sought support outside supermarkets, restaurants and apartment buildings. I asked for petition signatures and argued my case in dog runs and parks and just walking the streets. With the help of two or three people, I got about 700 signatures. During the last week, with the help of students and interns, that total went up to 1,900.

Unfortunately, the Board of Elections invalidated my 1,900 petitions because the petitions neglected to say that I was a female running for the female-designated membership position. I challenged the ruling and went all the way up to the New York Court of Appeals, the state’s highest court, where the dissenting justice wrote, “Absent a serious concern with fraud, persons wishing to run for office should not be shut out of elections by court-sanctioned strict adherence to technical requirements. No such concerns exists here.” Nice, but it was over.

I was asked to run again by the New York Progressive Action Network because, unlike Lavine, I have been a community activist for more than 40 years.

Unlike Lavine, whose child is in private school, I believe that public education needs the support and presence of middle-class families. So my children went to public schools, where I advocated for them and for the system.

I served on Community Board 2 for many years as chairperson of the Traffic and Transportation Committee and as a member of the Environment Committee and the Executive Board. Under my leadership, the Hudson St. bike lane was installed in the late ’80s, one of the earliest in the city.

More recently, I organized the Community Coalition to Save Beth Israel Hospital.

I take issues to the press. For instance, Assemblymember Harvey Epstein and I served nearly 1,000 petitions to Governor Cuomo seeking real review before hospital closures. With Arthur Schwartz, I successfully demanded that Beth Israel Hospital open up its closed beds to COVID-19 patients.

Unlike me, the present female committee member has never been involved in any local community effort. Until I was asked to run for the position in 2018, I had never heard of her, though I’ve been involved with local issues for more than 40 years.

But the real reason to replace her is that she has used her position as chairperson of the Progressive Caucus to dilute reform proposals so that they fall in line with the establishment position. Her actions on voters’ electoral choices is a perfect example. Lavine supported doing away with fusion voting, which gives us voters more choices, like the opportunity to vote for a mainstream candidate while also expressing support for the progressive policies of a minor party, such as the Working Families Party. The Progressive Caucus tabled a resolution to end fusion voting, but Rachel betrayed her own caucus by submitting the failed resolution to the full committee in her own name. She again took a stand against expanding democracy — and again betrayed her own caucus — when she opposed the caucus’s resolution to give unaffiliated registered voters the right to vote in the Democratic primary.

By contrast, I was one of the plaintiffs in the successful lawsuit last month to reinstate the Democratic presidential primary in New York State. So, voters can now choose who to represent them at the Democratic National Convention.

Finally, State Committee members are supposed to represent the will of their local political clubs and their constituents. But Lavine nominated Cuomo for governor despite the endorsement of Cynthia Nixon by both the Downtown Independent Democrats and the Village Independent Democrats.

I am supported by the New York Progressive Action Network, not just because I have been an active participant in their efforts to elect true progressive candidates — I actually worked in telephone banks to defeat Independent Democratic Conference (I.D.C.) members in the state Senate — but because I am a true progressive with no other personal agenda.

So the choice is clear: The incumbent has tried to undermine progressive values and democratic rights at every turn, while I have spent my entire life fighting for those values and rights. It is time for a change.

Clarification: Roberta Kaplan, the prominent civil-rights attorney and the wife of Rachel Lavine, called The Village Sun to take exception with Penny Mintz’s characterization of their son’s education. Kaplan clarified that he was homeschooled and only recently started attending a private school. “The vast majority of his education, he was homeschooled,” she said. “Until this fall, he spent his entire education being homeschooled. The implication that he has been in private school his whole childhood is incorrect.” Kaplan notably represented Greenwich Village resident Edith Windsor in the landmark U.S. Supreme Court case that, in 2013, struck down the federal Defense of Marriage Act, which had allowed states to refuse to recognize same-sex marriages.

Kaplan subsequently e-mailed The Village Sun a statement, which runs below, in full:

In the June 17 issue of The Village Sun, Penny Mintz, the opponent of my wife Rachel Lavine, implies that that our child has only had the benefit of private schools, instead of attending public schools like her children did. In reality, however, nothing could be farther from the truth.

Our child, who is very intelligent, is also on the autism spectrum, and has ADHD and severe dyslexia. As a result, the underfunded NYC public school system, as the Department of Education readily admits, was and is unable to provide our child with even a minimally adequate education.

In order to deal with this unjust reality,  Rachel spent the past five years of her life homeschooling our child. As a result of Rachel’s hard work, our kid is now a happy, confident and brilliant teenager who wins art prizes, marches for Black Lives Matter, and is very proud of his two mothers.

Like any responsible candidate running for office, Ms. Mintz should have left our kid out of her political campaign, period.

In the event that Ms. Mintz insists on talking about other candidates’ children, she should at least get her facts straight.  Here, what Ms. Mintz asserts as a criticism of Rachel is not only untrue, but is actually a testament to the kind of person, mother and advocate Rachel truly is.  I know that Rachel will continue to advocate courageously for the civil rights of all New Yorkers as the Democratic State Committeewoman for the 66th A.D., just as she has for our child.