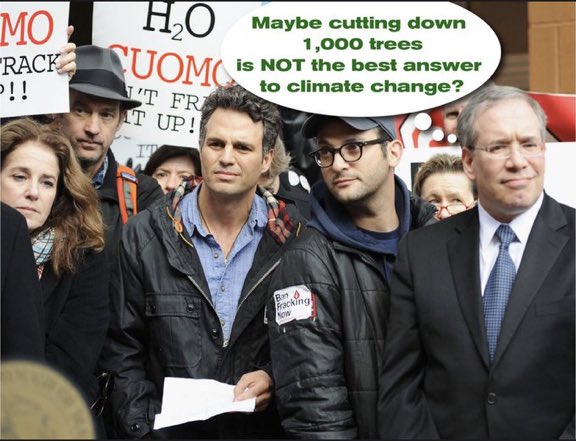 East River Park advocates hope Comptroller Scott Stringer (above right, at an anti-fracking rally a while ago) gives a hard look at the $1.3-billion contract for a resiliency project to bury and rebuild East River Park to make it a massive levee. (Courtesy ERPA)

BY THE VILLAGE SUN | The comptroller reviews all city contracts, and East River Park advocates are praying that he has some issues with the bid for for the East Side Coastal Resiliency project.

Construction on the resiliency project could start imminently if the contract is approved. E.S.C.R. calls for burying East River Park under eight to 10 feet of landfill to raise it above the floodplain.

Opponents, including members of East River Park ACTION, will rally outside Stringer’s office at 1 Centre St., on Tuesday at noon.

If the contract is approved and a “notice to proceed” is issued, IPC can begin prep work for the demolition of East River Park — including cutting down almost 1,000 mature trees — in order to build a giant levee over the 46-acre site.

The Department of Design and Construction, which is overseeing the project, said at prior Community Board 3 meetings that surveyors are ready to enter the park to perform necessary tests. Other work would include fencing off the park and bringing in trailers for field offices, which can begin within two months of approval.

In an e-mail on Tuesday’s protest, East River Park ACTION said, “At a time when the city is in a fiscal crisis, we are urging Comptroller Stringer to withhold approval on the $1,272,221,100 construction contract with IPC for the E.S.C.R. project, which has already gone overbudget, until an independent review is conducted on the prior plan that would have cost the city considerably less money and the park considerably less destruction.”

The “prior plan” that East River Park ACTION supports would not bury the park only to raise it. Instead, the earlier design calls for building a berm along the F.D.R. Drive’s eastern edge to protect the surrounding neighborhood from being flooded, as happened during Hurricane Sandy in 2012.

Park advocates are also urging people to contact Stringer’s office to urge him not to sign the E.S.C.R. construction contract.