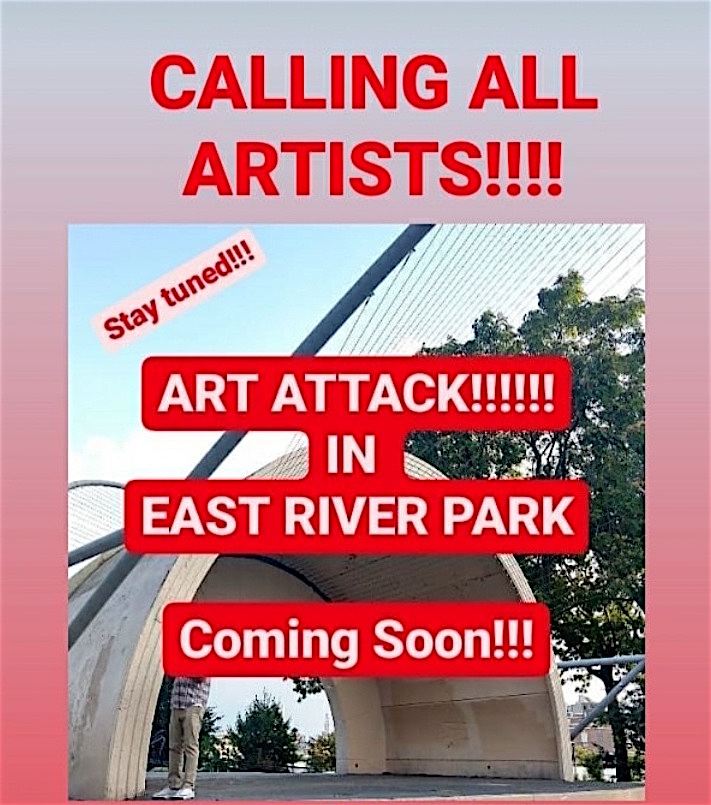 Artists are planning to take a stand to save the existing East River Park from destruction.

Painting and petitioning to save East River Park

BY THE VILLAGE SUN | The Art Attack is preparing to launch.

The last-ditch effort to save East River Park from demolition is enlisting a slew of well-known artists. Among them are reportedly Al Diaz, Hektad, Elizabeth Gaynor, Kiki, Tom Otterness, Ian Knife…and possibly Snake.

Still more artists are said to be “coming from Niagara” to lend a brush or spray some paint. At least one creator planning to participate does not want to be identified, though, not even to his fellow artists.

An organizer did share some sketches, made by Otterness, of the “plan of attack”:

In fact, the entire Art Attack is being kept on the down low. The artists don’t want the details of their plan leaked to the authorities, for fear they would try to shut the scheme down.

What can be said is the idea is to use the Visual Artists Rights Act of 1990 to protect the park from demolition for the East Side Coastal Resiliency megaproject. Under E.S.C.R., the park, which skirts the East Village and Lower East Side waterfront, would be piled with 1 million tons of dirt to raise it 8 to 9 feet to protect it — and nearby residential buildings — from Sandy-style coastal flooding. Nearly 1,000 park trees would be killed for the $1.45 billion project. The park would be closed in phases for the work.

Opponents argue that the original version of the plan — to build a simple earthen berm east of the F.D.R. Drive, without raising the park — is all that is needed, and would allow the existing park to be saved.

According to Pat Arnow, of the group East River Park ACTION, the city is planning to start the work in November.

Last month, a judge ruled against a community lawsuit filed by East River Park ACTION and others to block the work. But soon afterward the plaintiffs’ attorney, Council candidate Arthur Schwartz, announced they plan to appeal.

The opponents are also asking Governor Cuomo to intervene and stop the city project.

A petition to Cuomo by the activist group Warriors in the Garden, urging him to save the park from the resiliency work, has already garnered more than 3,150 signatures.

Two Boots Pizza will be feeding the Art Attack artists, according to a source.