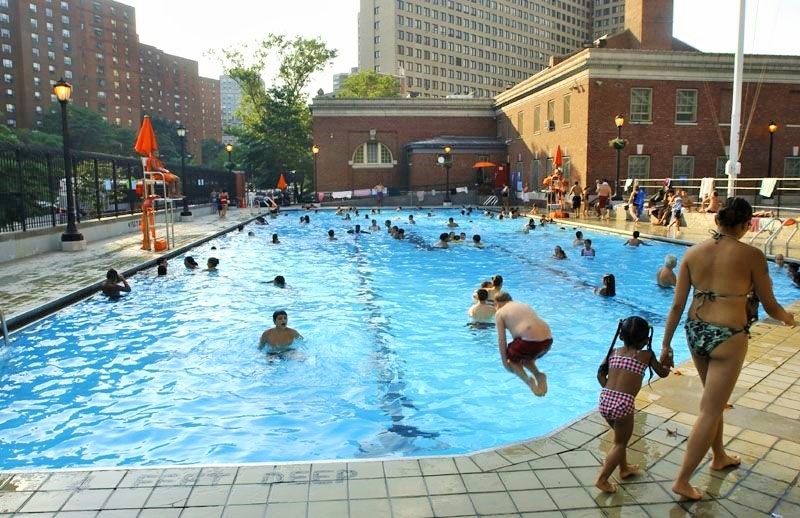 The Asser Levy Recreation Center's outdoor pool will be open this summer, though the kiddies' wading pool has a structural problem. (NYC Parks Dept.)

BY KEITH J. KELLY | The good news is that New York City public pools will open on Tues., June 28, the day after public schools close for the summer.

The bad news is that the citywide lifeguard shortage is forcing the city to cut kids’ swimming lessons and abandon early-morning, night owl and senior lap swim programs for the second year in a row at the city’s 53 pools.

“We know that New Yorkers rely on our city pools as their summer vacation destinations, and we are proud that we offer free access across the city to help New Yorkers safely stay cool on hot summer days,” Howard said. “Safety is our top priority.”

Currently, there are only about 600 qualified lifeguards on the payroll, she said, which is less than half the 1,400 to 1,500 that the city needs to fully staff.

Last year, the city also experienced a large shortage when it had only 1,013 lifefguards and was also forced to curtail swimming lessons and other programs.

Governor Kathy Hochul recently upped the starting pay for lifeguards at state-owned beaches, such as Robert Moses State Park and Jones Beach, by more than 30 percent in response to the shortage. That pay hike does not apply to the city lifeguards, who work for the New York City Parks Department and are currently without a contract. The starting salary for lifeguards under the expired contract is $16.10 per hour.

One city pool in the Downtown area — Tony Dapolito Pool, at Clarkson Street and Seventh Avenue South — remains closed while the city undertakes a $16.9 million reconstruction of the recreation center. The work is not expected to be completed until September 2024.

The outdoor pool at the Asser Levy Center, at the corner of E. 23rd Street and the F.D.R. Drive service road, will open as scheduled on June 28, but the 1-foot-deep kiddie wading pool is closed indefinitely after structural damage was discovered in the off-season.

All the city pools open at 11 a.m. and close at 7 p.m., with a one-hour closure between 3 p.m. and 4 p.m. for cleaning. Only white shirts are permitted to be worn poolside since the city seeks to curb any gang colors from surfacing at city pools.

Escaping to the 11 miles of city-owned ocean beaches may be a little more complicated and dangerous since long stretches of Rockaway Beach are closed to swimming. The ongoing Atlantic Coast Resiliency Project underway by the U.S. Army Corp of Engineers is rebuilding many of the rock jetties that protect the sandy beaches from the Atlantic Ocean.

While there have been no drownings at the Rockaway beaches while lifeguards were on duty at protected beaches in recent years, tragedy did strike on a particularly hot and dangerous Friday. On June 17, in two separate incidents, a 16-year-old girl was pulled from Beach 108th St. and a male believed to be in his late teens was pulled from the waters off Beach 98th St. Both were transported to St. John Episcopal Hospital where they were pronounced dead. Three others were pulled from the water by lifeguards after getting caught in the dangerous riptides in the Atlantic off Rockaway on the same day and survived.

Both of the victims who downed were pulled from the water at beaches that were closed to swimming.

“We are heartbroken by these unfortunate deaths,” Parks Department spokesperson Howard said at the time. “This is a painful reminder that New Yorkers should never enter the water in closed sections of our shoreline, where lifeguards are not present. We implore New Yorkers to only swim in open sections and when lifeguards are on duty.”

In addition to Asser Levy, pools in Downtown Manhattan that are open include Dry Dock Pool, at E. 10th between Avenues C and D; Hamilton Fish Pool, at Pitt and Houston Streets; Tompkins Square Pool, at Avenue A between E. Seventh and E. 10th Streets; and Vesuvio Pool, at Thompson St. between Spring and Prince Streets.

Free sunscreen lotion is available in dispensers at all city pools and beaches.