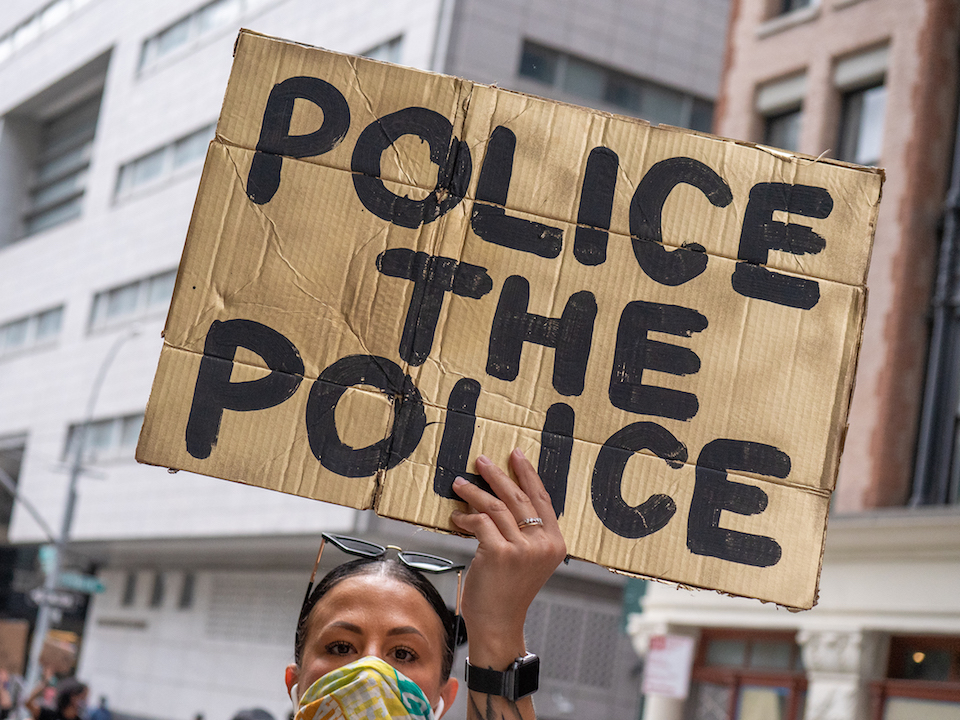 A George Floyd protester at a march in Lower Manhattan in early June. (Photo by Milo Hess)

BY FRANK MORALES | The uprising of popular resistance to police murders of unarmed Black people in America, under the banner of Black Lives Matter, is a call to rebel against the unchecked and unaccountable forces of institutionalized white supremacy acting under the “color of law.”

Like in the days of chattel slavery, the lives of Black people are counted by some to be of little consequence, and thus a murderous killing spree upon communities of color by police in the U.S. has persisted. The International Declaration of Human Rights states that, “No one has the right to treat you as a slave” (Article 4).

In order to bring about the end of police violence against the Black community, practical solutions, strategies and popular campaigns must be brought forth. Protest alone won’t do it, but must be transformed into sustained organizing campaigns with specific objectives. This column proposes two such campaigns, with the aim of transforming protest into practical and meaningful change.

Qualified immunity is a judge-made doctrine that protects law-enforcement officers from being sued in their personal capacity and being held personally liable for their excessive use of force or brutality. In its passage of the Civil Rights Act of 1871, Congress expressly allowed for individuals to sue public officials, including police officers, who deprive them of their civil rights. But in the century and a half since, the Supreme Court has gutted this landmark law. It created, and then allowed lower courts to expand the novel defense of so-called qualified immunity for police officers.

According to a June 3, 2020, CNN report, “Even though Derek Chauvin and three other officers are facing criminal charges in the death of George Floyd, it would likely be very difficult for Floyd’s family to sue them,” given that “the Supreme Court has developed a robust doctrine of qualified officer immunity, holding that officers cannot be held liable or even taken to trial unless it was already ‘clearly established’ that the officer’s conduct was unlawful.”

This past June 2, Congressmember Justin Amash (Libertarian-Mich.) announced that he was introducing the “Ending Qualified Immunity Act” to “eliminate qualified immunity and restore Americans’ ability to obtain relief when police officers violate their constitutionally secured rights” (The Hill, June 2, 2020).

Again, “qualified immunity” is a legal doctrine in U.S. federal law that shields government officials (including police) from being sued for “discretionary actions” performed within their official capacity unless their actions violated “clearly established” federal law or constitutional rights. That’s the “doctrine.” The reality is that so-called “qualified immunity” offers the police a blanket of protection against prosecution for brutality and murder. Abolishing such protection would eliminate cover for racist and violent cops, who will fear, justifiably, being taken for all they have and more, including going to prison for their crimes.

The question is how do we accomplish the goal of abolishing “qualified immunity”?  Well, given that it’s unlikely that representatives of local, state and municipal governments will go up against the police and their pugnacious police “unions,” and while it’s also unlikely that the Supreme Court can be counted on to side with the victims of police brutality and will most likely quash any congressional attempt to do away with these cop protections, it seems that the only way to stop violent police behavior is to organize “horizontally” — from the bottom up — popularly based ballot-initiative campaigns whose aim is to create local laws to abolish the defense of “qualified immunity.”

Nationally, in 2013, a total of 207 ballot-initiative proposed measures, in 37 states, were put forward. A total of 31 were passed into law, while 103 failed and 67 were carried over to 2014. In broad terms, the process begins with the drafting of a petition; for example, “we the undersigned call for the abolition of ‘qualified immunity’ for the libelous actions of the police.” If the petition garners the required number of voter signatures during some specified time period, it is then put up to the public for a direct and binding vote. If the measure passes, it automatically becomes law! The process varies from state to state, municipality to municipality. Here in New York City, the process is cumbersome but not impossible, requiring City Council support.

Ballot initiatives are a form of direct democracy, bypassing elected officials and legislatures. Through this form of direct democracy, we can outlaw “qualified immunity” and ensure that police face the very same sanctions that we all do when it comes to brutalizing and murdering innocent people! We must at this very moment build on the energy of our movement against police violence. By “hitting the streets,” going door to door with our petitions, and educating the community on the issue, we can through ballot initiatives abolish the police defense of “qualified immunity.”

Second: Utilizing the same ballot-initiative approach, ban the militarization of the police.

The proliferation of militarized police, armed to the teeth with manifestly military-grade weaponry, fostered through various regulations, like the Federal 1033 Program and “military transfer” resolutions, are designed to suppress and intimidate movements of dissent. In the aftermath of the 9/11 attacks, this process of militarizing the police was masked as a “war on terror,” when in fact it is and continues to be nothing other than a war on dissent.

The 1878 Posse Comitatus Act (18 U.S.C. § 1385) states that: “Whoever, except in cases and under circumstances expressly authorized by the Constitution or Act of Congress, willfully uses any part of the Army or the Air Force as a posse comitatus or otherwise to execute the laws shall be fined under this title or imprisoned not more than two years, or both.”

This is the singular federal law that criminalizes the use of the military for law-enforcement purposes. It is the bright line between the military and police function, the bright line that undergirds our democratic traditions! Ominously, the growing symbiosis and identification of these two “entities of force” — namely, the police and the military — is the defining characteristic of a police state.

The spectacle of khaki-soldier-cops originated way back in 1968 with the creation of SWAT and Pentagon domestic operations to suppress dissent in America, the so-called “civil disturbance plan” code-named Operation Garden Plot. Since then, so-called “nonlethal weapons” (chemical gases, rubber and plastic bullets, acoustic and electromagnetic “pulse” weapons, etc.) have proliferated in use against the dissenting public (“noncombatants”) exercising their/our First Amendment rights of assembly and free speech.

These weapons, which are part of the arsenal of “law enforcement” in this war on dissent need to be outlawed, and can be through the codification of Posse Comitatus-like legislation, via ballot initiatives on the local level.  In addition, we must support state Senator Jessica Ramos (D-Queens), who recently introduced a bill to prevent police from using tear gas and rubber bullets against civilians, in an
effort to curtail and abolish aggressive policing practices in New York.

In conclusion: Both of these campaigns — the push to abolish “qualified immunity” and the demilitarizing of the police — utilizing the ballot-initiative strategies outlined above, can and should be brought to bear, in order to both stop the violence directed against communities of color, and to protect and extend the terrain of protest for those resistant communities in mobilization around these issues.

For Black Lives to really matter, we need to be about forcing these changes to police behavior by transforming protest into real change, and to stop once and for all the violence of the police directed against the Black Community and those who protest and resist this violence.