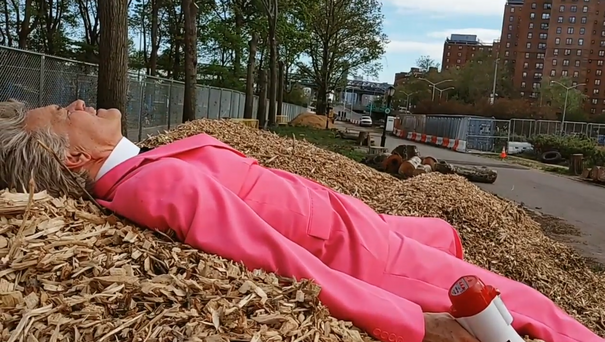 Opinion: The trees are one with East Village artists

BY BILL TALEN | Isn’t it too late to save East River Park? Not if this is the East Village; not if we still live in the soul of this radical, creative place. This is the home of Charlie Parker and Allen Ginsberg.

The only way that the outrageous idea of clear-cutting an urban forest could win approval was to keep it away from people who might publicly conjure up the magic of a tree. The only way to take our green space from us is to hide the loss of dream-and-play space for the children in the Riis and Baruch Houses. When people are reminded of that time of their own lives, they might suddenly rise up at the prospect of its loss.

It comes down to not letting people protect their experience. The East River Park does not have a wealthy conservancy to protect it.  You can see the real estate moguls nudging de Blasio — “Look at those river views.” Finance and real estate have always run the city. And yet, to say that this can’t be stopped is to underestimate the power of the Earth’s changes.

The government is becoming the Earth, with forces unleashed that make a mockery of the United States Army Corps of Engineers. Raising Manhattan behind expensive seawalls, with the islands beyond New York Harbor ringed by Netherlands-style floodgates — such measures seem unavoidable. But the Earth is not an enemy. The Earth is a living thing that Americans, in particular, are taught to ax and move on. In this time of the Sixth Extinction, that’s impossible.

The Earth’s ferocity can’t be measured as an incrementally growing threat. Our computer modeling is always underestimating what we are dealing with. We can try to survive, but not by imagining we are the Earth’s equal. The child gazing out across the East River, wondering about the tides, is not just the romantic moment of youth. That is where the Earth is dreaming along with us.

How many natural disasters will we need to survive to get to the point that the Earth is alive? Donald Trump showed us how walls don’t work. The community wanted a berm, an earth-rise that would save 80 percent of the park’s trees: Meet the river with a riverbank.

We Americans inherited the historic slaughter of ecosystems with our “Westward ho!” That tradition reduced trees to energy units and building beams and we razed a continent. So de Blasio and Adams and their rich buddies are catching the last wave of violence, at the very end of this use of the living forest as a cash crop.

Allen and the Bird and Bimbo Rivas and Penny Arcade and Steve Cannon and Hun Gee and Miguel Pinero and Martin Wong and Eileen Myles and Lydia Lunch and Abbie Hoffman and Ellen Stewart — the East Village artists stormed over the walls of Moloch! Moloch! Moloch! They found music beyond the fearful wall of America.

Manhattan will tense up, harden its skin and build a harsh resentment of the Earth. Fortress Manhattan. But the real estate moguls will learn that the Earth is already over the wall. It’s too late to use climate change as a way to make a fortune.

The Earth is here. The Earth is alive. The thousand trees will grow in us and turn on the new bright lights of the city.

Talen performs and preaches as Reverend Billy at the Earth Church, at 36 Loisaida Ave. (Avenue C), at E. Third St.