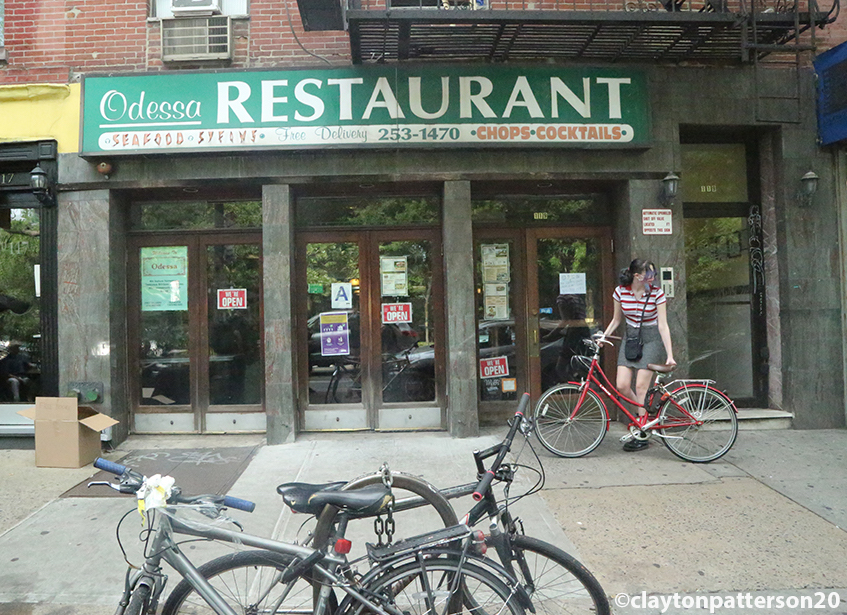 A customer pulls up outside Odessa Restaurant to get a takeout order on Saturday. (Photo by Clayton Patterson)

Odessa Restaurant closing, hopefully to reopen if COVID under control

One thing is for certain: Odessa Restaurant is closing for a renovation.

When — or even if — the famed 24-hour East Village diner will reopen, though, actually is another matter.

At least, that’s according to the place’s longtime manager, who was busy filling delivery orders early Sunday morning. The restaurant was slated to close in a little more than 24 hours, at 3 a.m. Monday.

Initially, it was reported that the iconic Avenue A eatery would be shutting its doors for good.

But then came word that, in fact, Odessa was only closing for a sprucing-up, with plans to reopen by early 2021.

When The Village Sun stopped by early Sunday morning, Dennis Vassilatos, the place’s manager for the past three decades, was answering the constantly ringing phone, and calling out the items to the short-order cook through the kitchen window.

“Two orders of fries and a pizza burger — must be plain!” he said. “Potato pancakes, applesauce!… Coffee, club deluxe!… .

“Nonstop, I can’t breathe,” he said, when he had a moment away from the phone.

“We gonna renovate, that’s for sure,” he said. “After that — five, six months — we coming back. If, with COVID, it’s two years, we gonna rent it. That’s what the owner explained to me.”

While the lack of indoor dining has been crushing for Odessa and other eateries, at least deliveries have shot up.

“Delivery has tripled since the restaurant closed,” Vassilatos noted, “but it’s not enough.”

He said Steve Helios, the place’s owner, has been weighing which direction to go — whether to stick with Odessa or throw in the towel and rent out the spacious property, which includes the basement.

“He can stay at home and get $25,000 rent [for the space],” the manager said. “The downstairs is equal to the upstairs — it’s all walk-in refrigerators down there.”

He said a bank likely would pay $145 per square foot for the prime Avenue A location.

The restaurateur also owns the building, which, Vassilatos said, is the only reason Odessa is even still there.

He described Helios as not just a co-owner but “the owner” of the restaurant, noting that Helios had a partner who left about a year and a half ago.

According to news reports, however, Mike Skulikidis is still a co-owner of Odessa and is actually the building’s owner, as well, not Helios.

In addition, as a waiter, Willy, told a Village Sun photographer a week ago, the two owners have very different levels of interest in the restaurant and whether to keep it going or not.

In 2013, Skulikidis told a reporter, “Everything is for sale at the right price anytime.”

In short, there seems to be some vagueness over exactly who owns what and who is actually calling the shots.

At any rate, manager Vassilatos at least remembers the exact date he started working there: “Twenty-nine years, since 1991 — October the 12th.”

Recounting Odessa’s genealogy, he said that from the 1960s to 1980, “Ukrainians, Russians” ran Odessa Cafe and Bar next door.

Odessa Cafe and Bar closed in 2013 and today is home to St. Dymphna’s Irish bar.