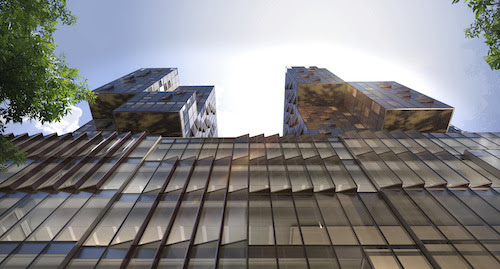 The Paulson Center used to be known as "The Zipper" for its design resembling the familiar fastener. (Brooklyn Digital Foundry)

No supermarket, but massive new Paulson Center is fully stocked with array of N.Y.U. uses

BY THE VILLAGE SUN | But can you buy a can of baked beans or a box of Cheerios there? Nope… .

Previously, the building, located just north of Soho, had been referred to by university officials as “The Zipper,” for its zipper-teeth-like appearance when viewed from above. Naturally, of course, it was always expected the edifice would be named after a wealthy donor. That happened in December, when N.Y.U. announced the Midtown-sized structure plunked in the middle of the Village would be named for Paulson, who donated a whopping $100 million to the project.

Paulson played a key role in the 2007 U.S. subprime mortgage disaster, when he earned urged Goldman Sachs to market risky home loans, even as he bet against mortgage-backed securities, earning him $4 billion in the process. He was, in turn, sued by the Securities and Exchange Commission, ultimately settling by paying $300 million to the U.S. government and $250 million to investors, one of the biggest Wall Street penalties in history.

Paulson was also a critic of Occupy Wall Street.

“The top 1 percent of New Yorkers pay over 40 percent of all income taxes, providing huge benefits to everyone in our city and state,” he said, in part, in a statement in October 2011. “Instead of vilifying our most successful businesses, we should be supporting them and encouraging them to remain in New York City and continue to grow.”

According to a press release, the Paulson Center, “provides a platform for pedagogical exploration with state-of-the-art performing arts, athletics and academic facilities that meet the ambitious sustainability goals set by N.Y.U.’s climate action plan. The multiuse facility includes more classrooms than any other building on campus, a new commons, first-year and faculty residential towers, and theatrical and musical performance and rehearsal spaces.”

The building was designed by Davis Brody Bond and Kieran Timberlake to be “a vertical campus.” There are 58 classrooms, a  new athletic facility for N.Y.U.’s NCAA Division III men’s and women’s basketball, fencing, volleyball, wrestling and squash teams, plus a six-lane pool and an elevated, two-lane running track.

As for performing arts, there are three theaters, including a proscenium theater, an orchestra ensemble room and support spaces for the Tisch School of the Arts and Steinhardt School of Music.

The building’s commons area is a light-filled gathering and study space “for the N.Y.U. community.”

The state-of-the art center sports 25,000 square feet of green roofs, both for students to enjoy and to reduce the building’s environmental impact.

The Paulson Center also boasts bird-friendly design. Customized, fitted glass minimizes bird strikes, as well as reduces solar gain, or the heating of the glass by the sun.

Replacing the former Coles Gym with the new Paulson Center has also resulted in an “improved pedestrian” corridor along Greene Street. (The creation of this extra-large “superblock” back in the mid-20th century essentially demapped Greene Street.) In addition, a new playground for toddlers was included as part of the project.

The Paulson Center is part of the plan for the N.Y.U. “core” that was hashed out a decade ago. Responding to community complaints about the growing university randomly and unpredictably eating up parts of the Downtown community, N.Y.U. said it would confine its local growth to its two South Village superblocks. However, currently, the university says it does not have plans in the near future to build three other buildings that were envisioned as part of the “core” project.

As part of the rezoning process for the two supersized blocks that was needed to permit construction of the four new buildings, N.Y.U. initially promised the community that, if the Morton Williams supermarket, at LaGuardia Place and Mercer Street, had to be moved, it would be given a home in the Zipper Building, since renamed the Paulson Center. But, as it turned out, in the zoning’s final approval, which was agreed to by the university and the City Council, that pledge was quietly removed.

As a result, now N.Y.U. says the Paulson Center’s 735,000 square feet of space is all booked up and there is no room for the Morton Williams market, which currently occupies 14,500 square feet — which is equal to just 2 percent of the Paulson’s total space.

In the meantime, the Department of Education is now mulling whether to build a 100,000-square-foot, citywide public school for special-needs students at the current Morton Williams site, which would displace the key, full-service supermarket the community relies on. D.O.E. has until the end of this year to make its decision.

A community petition demanding the supermarket stay where it is or be relocated nearby has gathered 7,500 signatures. In response, N.Y.U. has said it will work with local politicians to insure that the Morton Williams stays in the area.