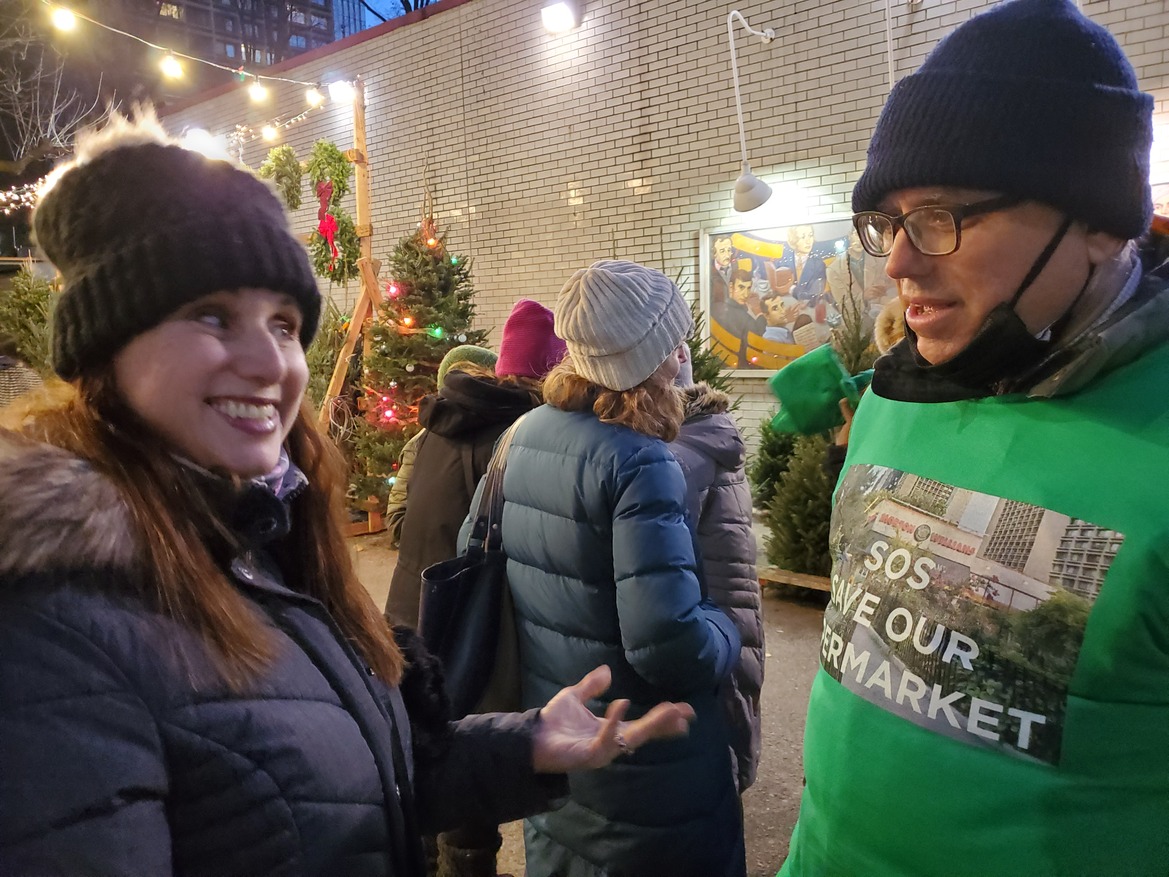 Jeannine Kiely, chairperson of C.B. 2, and Alan Gerson spoke after the rally. (Photo by The Village Sun)

‘We shall not be moved!’ Defiant rally says Morton Williams market must stay

BY LINCOLN ANDERSON | A pumped-up crowd of more than 150 people — including area residents, politicians, union members and supermarket workers — rallied in the cold outside the Morton Williams on Dec. 13, demanding that the key Bleecker Street store be saved.

Over their coats and sweaters many wore green T-shirts with “Save Our Supermarket” printed on the chest superimposed on top of a photo of the store. Union members waved signs with their local chapters’ names.

Also, unveiled at the event was a thick sheaf of petition pages, ready for delivery to the Adams administration, tied together with twine, and signed by 7,500 residents, calling on the supermarket to remain at the current site or be relocated nearby.

“This isn’t just a supermarket — it’s a community center!” Councilmember Chistopher Marte told the rally. “We’re not going to lose this supermarket.”

Similarly, Anne Hearn, a 55-year resident and former tenant leader of the neighboring Washington Square Village, said, “The store is the hub of our little community. It’s a hub — you go out of your apartment and you meet people [there].”

Another local said, “There’s a multitude of elderly and disabled people in this community who would be hard-put to find another place [to shop for food].”

Toward the end, former Councilmember Alan Gerson had them sing the stirring 1960s anthem, “We Shall not Be Moved,” whose lyrics were certainly apropos.

Gerson, who lives on the block, in 505 LaGuardia Place, is a co-leader of the ad hoc group Save Our Supermarket (S.O.S.). Sophie Gerson was a prominent school board leader.

More than 10 years ago, New York University rezoned its two South Village “superbocks” — including this one, which is bounded by LaGuardia Place and Mercer, Bleecker and Houston Streets — so that it could develop new buildings on them. During the process, N.Y.U. assured that the supermarket, if needed, would be able to relocate into a new university building planned on Mercer Street between Houston and Bleecker Streets. Yet, somehow that agreement never wound up in the rezoning’s restrictive declaration.

Meanwhile, fast-forward to the present and N.Y.U.’s new Mercer Street building, known as “The Zipper,” is being readied for opening. But now the supermarket faces potential displacement by the construction of a new seven-story, citywide public school for special-needs students. The Department of Education has until the end of 2023 to decide whether to build the school.

The supermarket workers’ jobs are also on the line, pointed out Nikki Kateman, a representative for Local 338 of the Retail, Wholesale and Department Store Union / United Food and Commercial Workers.

“These are people who are essential workers,” she stressed. “They have been here for decades.”

Gerson was inspired to recall, “I remember when there was some civil unrest in the streets and people took refuge in the meat lockers at Morton Williams.”

“If there is construction and demolition, the garden will be destroyed,” the former councilmember warned.

More to the point, he said there are alternative locations for the new school, which would allow the supermarket and garden to remain where they are.

“Some of them are on city-owned property, which will be much less expensive [than new construction],” he noted.

Gerson previously has mentioned, for example, the old P.S. 64 (former CHARAS/El Bohio) at Ninth Street and Avenue B. S.O.S. feels the simplest solution is to keep the supermarket where it is and locate a new site nearby for the school.

Mark Fiedler, who lives on Bleecker Street, said the market has also been a resource for local bars and restaurants.

Jeanne Wilcke, a Noho community leader, said the community needs not one but “three home runs” — namely, keeping the market and the garden, plus getting a new school to help kids with learning disabilities.

“We ask the city administration and N.Y.U. to live up to commitments and promises and join us in hitting the ball right out of the park,” she said.

After the rally, Gerson buttonholed Jeannine Kiely, the chairperson of C.B. 2, who attended the event, but did not speak. C.B. 2 has advocated strongly for the new school, saying it was the main “giveback” to the community under the N.Y.U. rezoning. Kiely says, based on fair-market value, the parcel is worth $65 million.

At one point after the rally, someone asked her to sign the S.O.S. petition but she declined.

“C.B. 2’s been fighting for a grocery store and a school and the garden for more than a decade,” Kiely told The Village Sun. “N.Y.U. threw the community under the bus. We have about a year to figure it out. The City Planning commission had it in their resolution that the supermarket was required to be in 181 Mercer St. [the Zipper Building] and the final deal, which was negotiated by the City Council and N.Y.U., pulled out that requirement. It’s a typical pitting different community uses against each other.”

As for Gerson’s suggestion of using the old P.S. 64 for the new school, she said she did not want to weigh in on it since the site is not located in Board 2.

Afterward, Callet shared that she had confirmed that the priest at nearby St. Anthony’s Church, at Sullivan and Houston Streets, had announced the supermarket rally at Sunday Mass two days earlier and urged people to attend. Callet had initially heard the story from a member of the LaGuardia Corner Gardens who lives on Spring Street.

“So,” Callet said, “let the city, the elected officials and N.Y.U. understand that this is a large community that needs and uses Morton Williams. It’s a community hub,” she added, echoing Hearn, “a place for the elderly or the lonely to come, shop and chat.”

“I’m not necessarily campaigning,” Ryan said of her presence at the rally. “I came here to offer support and I’m interested in land-use issues. But I think this is a big issue and that it’ll be a campaign issue: It’s like, how do you deal with N.Y.U. and the expansion of N.Y.U.?”

Morton Williams representatives will meet with one of Mayor Adams’s deputy mayors on Jan. 6. Separately, Gerson and S.O.S. will meet with the School Construction Authority.