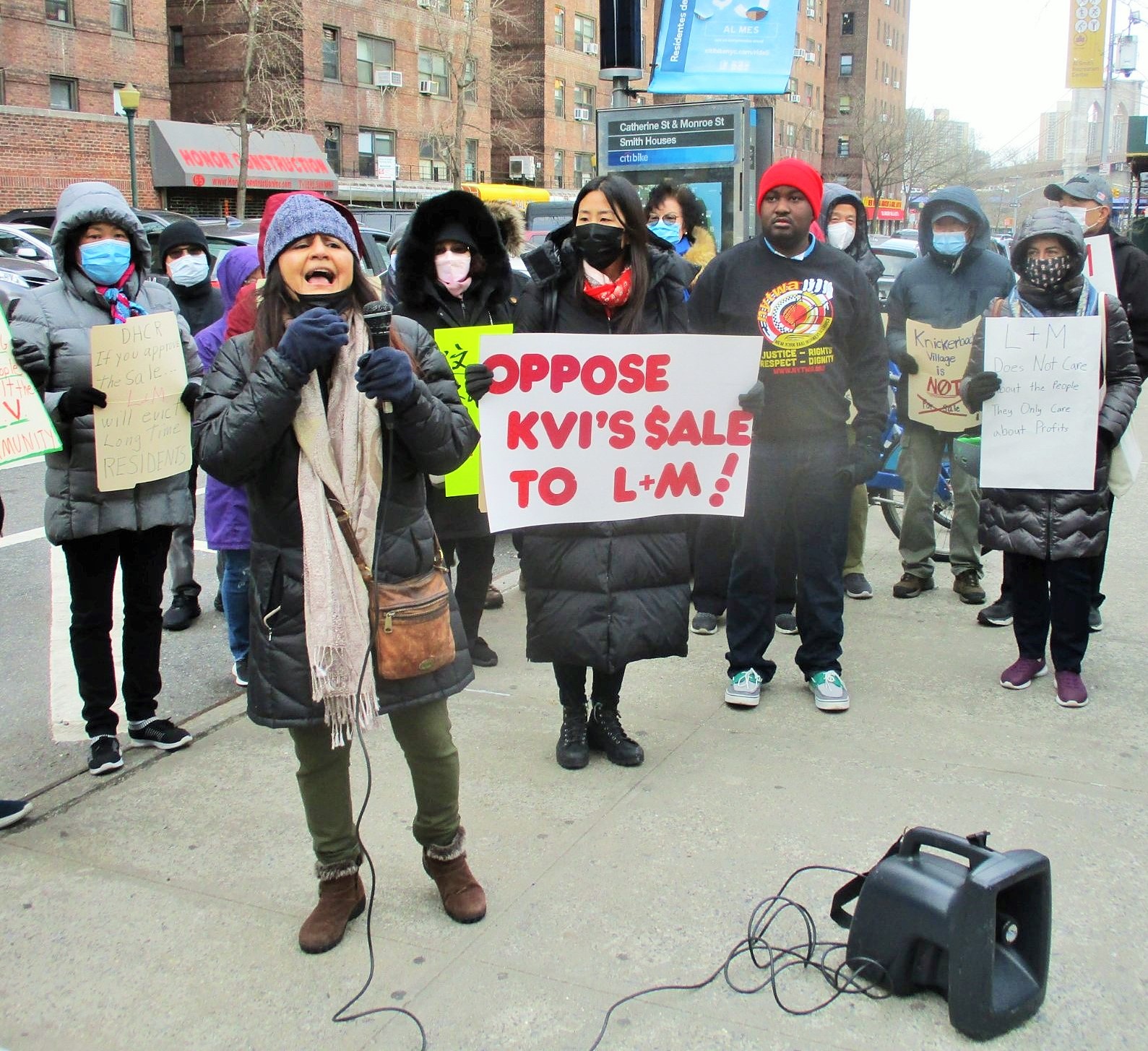 Isabel Reyna Torres, a leader of the Concerned Tenants of Knickerbocker Village, spoke at the March 28 protest. (Photo by Bill Weinberg)

BY LINCOLN ANDERSON | At the end of last month, opponents of the plan to sell Knickerbocker Village to L&M Development protested in the bitter cold outside where a rent hearing for the complex would be held later that evening.

The protesters included members of the Concerned Tenants of Knickerbocker Village, notably Isabel Reyna Torres, a former member of the complex’s tenants association. Also standing with them were some current candidates for political office, including Grace Lee, who is running for state Assembly, and former Councilmember Kathryn Freed, running for Democratic State Committee versus longtime incumbent, Jenny Low.

In an interview afterward with The Village Sun, Freed said she doesn’t doubt that the Knickerbocker Village Tenants Association was well intentioned and tried to win the best deal possible for the complex. But she said she’s leery of these particular buyers and also concerned that the T.A. felt they had no other choice but to accept the deal that was on the table.

“I get why they’re upset at L&M, because they have a horrible record,” Freed said of the Concerned Tenants group. “And they seem to be assembling a lot of development in Lower Manhattan, so that gives me concern. The folks at L&M seem to be glomming onto a huge chunk.”

Freed said she’s concerned that state Homes and Community Renewal, the state agency that oversees the complex, and L&M were warning the tenants that they faced rent increases of up to 13 percent each of the next two years unless the sale to L&M went through. Under the developer’s plan, money from project-based vouchers would be used to make sorely needed repairs to Knickerbocker Village’s 12 buildings, which date from the 1930s.

However, Freed said, “I don’t know why they can’t find some money to make the repairs, instead of [dangling] a threat over their head to force the sale. It doesn’t seem like anyone has looked into revenue sources or any other way instead of selling. I don’t understand why, right after COVID, that there aren’t pots of money for them to tap into, so the tenants don’t wind up with huge increases.”

Also Freed wondered, “If they want to sell, why are L&M the only ones they’re considering?”

“A lot of what’s been happening to Lower Manhattan, people are saying, ‘Take this or that will happen to you,'” she noted. The East Side Coastal Resiliency project and the destruction of East River Park is “exactly” a point in case, she said.

“I think the tenants association is trying to do their best,” she conceded, “but they’re certainly not in a power position.”

L&M is currently also planning on developing two megatowers nearby north of the Manhattan Bridge. What their motives are at Knickerbocker Village — whether simply to skim off a profit or maybe hope that the Article IV designation will someday go away, opening up development possibilities — is anyone’s guess, according to Freed.

On Feb. 14, a spokesperson for L&M told The Village Sun, “A memorandum of understanding (MOU) was negotiated and executed by the duly elected members of the Knickerbocker Village Tenants Association, L+M and New York State Homes and Community Renewal.”

As for concerns about the complex’s future affordability, he said, “L+M is bound by the terms of the MOU and will meet its obligations to preserve affordability at Knickerbocker Village and perform $50 million of needed repairs.

“L+M cannot deregulate the property,” the spokesperson added. “Knickerbocker Village will be permanently subject to Article IV regulation and will be subject to additional tenant protections under the regulatory agreement at least until 2069. Those protections could be extended permanently if the tax exemption and the Department of Housing and Urban Development contracts are renewed, which all parties are bound to pursue. It would not be possible to build anything on the site, and there are no plans to do so anyway.”