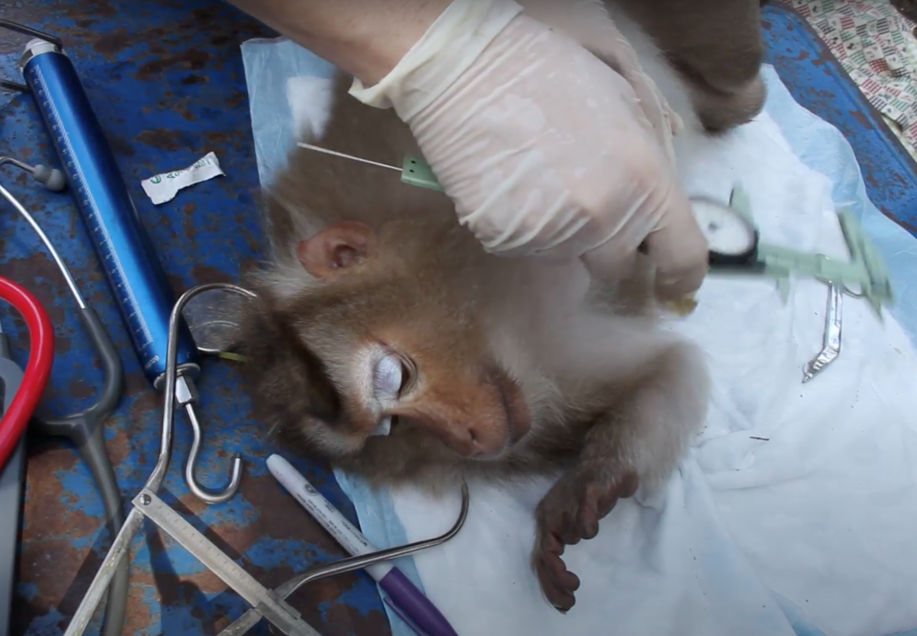 A macaque monkey being used in medical research. (Photo by MM Feeroz)

BY NATALIE JONAS | The last place one would expect to find a colony of monkeys is in the heart of the West Village. Encrypted key-padded doors secure the laboratories of the New York University Center for Neural Science, home to pig-tailed macaques obtained from a breeding facility operated by the University of Washington’s (UW) National Primate Research Center (WaNPRC).

The facility has been the subject of animal welfare complaints and findings of violation of state laws and has been embroiled in several other controversies over the previous few years, which were first brought to light by an Arizona Republic investigation. For at least a decade, professors in the N.Y.U. Center for Neural Science have been sourcing pig-tailed macaques for research purposes from the Mesa, Arizona, breeding facility.

Late last December, the National Institutes of Health (NIH) launched an investigation of the WaNPRC breeding facility in Mesa, largely due to the unmanaged spread of disease within the facility.

Three days after the NIH launched its probe, the King County Superior Court in Washington State ruled that UW, home to the WaNPRC, had violated the Public Records Act by intentionally destroying photos and videos of monkeys maintained in their colonies; the act of doing so being a Class C felony in Washington State.

Infectious disease remains a huge problem for the macaques in the Mesa facility and the driving factor behind the NIH investigation, despite the fact that for years, National Scientific Advisory Board (NSAB) reports on the WaNPRC have highlighted the continued issues with the management of disease within the facility.

N.Y.U. Professor Dr. Tony Movshon has served on the National Scientific Advisory Board since 2012, and in 2015 the NSAB released a report saying the UW primate center had “infectious disease problems in the colony.” The infectious diseases discussed were threefold: simian retrovirus (SRV), Methicillin-resistant Staphylococcus aureus (MRSA) and valley fever. The NSAB report, which Movshon co-supervised, then notes how the issue “certainly represents a significant confound in an infected research animal.”

Nonetheless, N.Y.U.’s Movshon used and continues to use these animals in research conducted in his and newly appointed dean of the N.Y.U. Graduate School of Arts and Sciences (GSAS), Lynne Kiorpes’s, visual neuroscience laboratory. Kiorpes and Movshon mainly research amblyopia, or lazy eye, in their laboratory housed in the Center for Neural Science at 4 Washington Place. Movshon founded the center in 1989 and remains its director. It is unclear how far back Kiorpes and Movshon have sourced monkeys from the WaNPRC.

A 2019 document details the clinical records of dams (mother macaques) and their children, who were sent to N.Y.U. in a 2019 shipment. These records were sent by the supervisory veterinarian at the WaNPRC Arizona breeding colony to Lee-Ronn Paluch, N.Y.U. associate director of the Office of Veterinary Resources, and Dean Kiorpes, among others.

The facility in which the monkeys are bred is located in the epicenter of valley fever (coccidioidomycosis) contagion. Valley fever, which spreads through fungus in the soil being released into the air, has been an issue in the facility for years.

Dr. Ale Aguirre, owner of Salt River Veterinary Specialists, in Scottsdale, Arizona, which has its own valley fever treatment center due to the immense threat the disease poses, notes on his Web site how little is known about valley fever resurgence. Although he specializes in house animals, he explains that “in patients that are unable to clear the organism, therapy can be a lifetime. Recurrences are common in patients that are not treated for a sufficient time period.”

Infant macaques bound for N.Y.U. were apparently separated from their mothers early enough to have compromised their integrity as research subjects. According to the U.K.’s National Centre for the Replacement Refinement & Reduction of Animals in Research (NC3RC), ending weaning too early can lead to developmental and behavioral abnormalities, and, as the NC3RC notes, may also impact the credibility of such monkeys as research animals.

In 2012, the WaNPRC was planning to ship a macaque from its Arizona facility to N.Y.U.’s campus. It ran into several obstacles because many airlines refuse to transport monkeys not going to or from a zoo due to pressure airlines face from animal-rights activists. In an e-mail exchange between N.Y.U. Dean Kiorpes and Ben Petersen, program manager at the Mesa facility, Petersen noted, “the ‘Animal for Research’ stickers all over the shipper will need to be removed!’ prior to takeoff in order to bypass the restriction. Kiorpes has not responded to requests for comment.

In May 2021, the Washington Department of Agriculture cited the WaNPRC for shipping infected macaques across state borders without reporting it to state veterinarians. The New York Department of Agriculture and Markets was able to procure a “certificate of veterinary inspection,” a prerequisite for interstate animal travel, for the 2021 shipment of macaque monkeys to N.Y.U. No prior shipments had this certificate available.

Before being sent for neurological research to N.Y.U., many of the infant macaques and their dams contend with brutal conditions in the Mesa facility. In addition to bouts of disease, the clinical veterinary records show all of the dams received injuries from other monkeys in the enclosures. In 2019, L08020 was observed with “severe trauma” and the distal tip of her tail was degloved, most likely due to other macaques ripping it off. Her tail was later fully amputated due to the extent of the injury. In the same month, L08020 lost a fingertip. The veterinary notes state, “her infant had all sutures removed today….” implying her N.Y.U.-bound infant had also been attacked by other macaques in the facility.

Some macaque infants slated to arrive at N.Y.U. died before shipment was possible. As noted in a Jan. 17, 2019, e-mail from the supervisory veterinarian at the WaNPRC Arizona breeding colony, infant Z19005, who was bound for N.Y.U., was found dead on Jan. 12 in its enclosure, with “histopathology [tissue analysis]…pending.”

Multiple other deaths of macaques, at least one of them N.Y.U.-bound, were reported in the Mesa center. In 2019, a three-day-old male macaque, bound for N.Y.U., was found “…dead in the enclosure. A moderate amount of blood was present, smeared on the perch…” as noted in the necropsy report. Another monkey in the enclosure had inflicted “severe, acute cranial trauma” on its cagemate, leading to its death.

In response to questions about the integrity of the Greenwich Village university’s research animals, N.Y.U. spokesperson John Beckman wrote in an email that “N.Y.U. only accepts animals that have been pre-screened and tested negative for excluded pathogens that can adversely affect animal health, human health or the scientific integrity of the research conducted at this university.”

In an October 2021 e-mail sent to N.Y.U. President Andrew Hamilton detailing concerns about N.Y.U.’s purchase of infant macaques that may have been exposed to valley fever, Dr. Lisa Jones-Engel, PETA’s senior science adviser on primate experimentation, noted, “the use of these monkeys can and has led to compromised experiments.” Additionally, she called for N.Y.U. to cease importing macaques and that any research involving possibly infected monkeys be investigated and even possibly rescinded. President Hamilton did not respond to her e-mail, Jones-Engel said. Hamilton also did not respond to numerous requests to comment for this article.

In response to numerous e-mails from this reporter to more than 20 administrators, professors or affiliates of the Visual Neuroscience Lab, the GSAS office, Center for Neural Science and many others, Beckman responded with an e-mail of his own, in which he noted he would respond on “behalf of everyone.” In his response, Beckman noted that “All animals used in [N.Y.U.’s] research studies, from all sources, are given expert veterinary care and are known to be free of diseases that could impact the research.”

“N.Y.U. finds the assertions that research involving monkeys from the University of Washington facility should be withdrawn or retracted to be baseless and without merit,” Beckman stated.

It is still unknown what steps, if any, N.Y.U. will take in response to these allegations of accepting potentially diseased macques for research purposes.