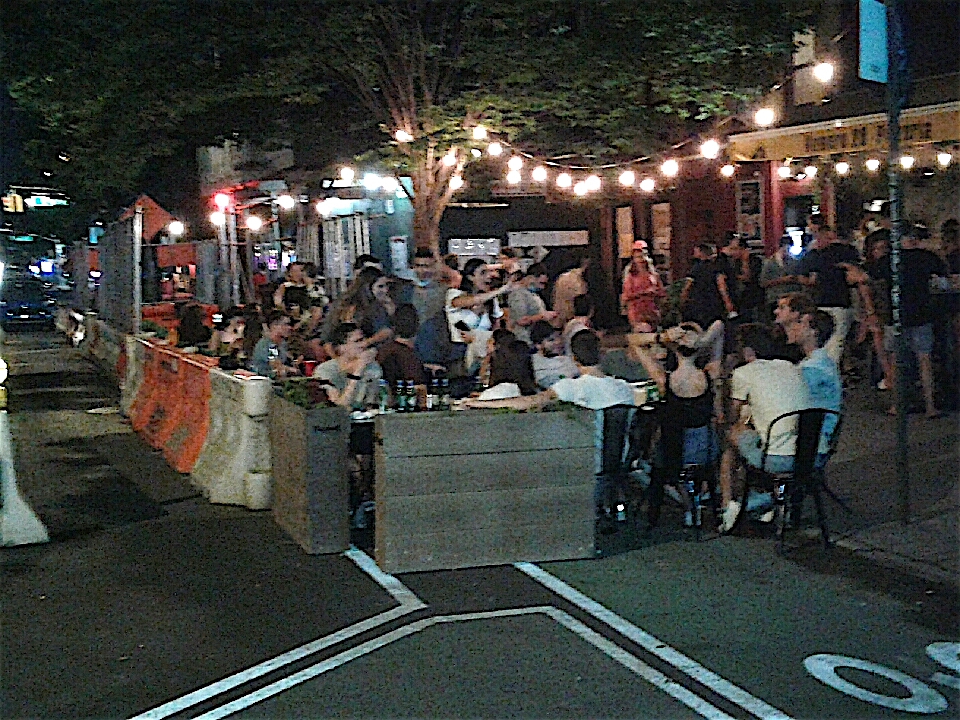 A restaurant on Second Ave. put its seating in the bike lane — but traffic was already being diverted around the bike path due to a construction project. (Photo by The Village Sun)

Mayor: It’s time to ‘double down’ on outdoor dining

BY THE VILLAGE SUN | Speaking Wednesday, Mayor de Blasio broke what he called some “tough news”: The city’s plan to allow indoor dining is on hold — possibly for at least the entire summer.

That’s because it’s not safe to allow people back inside restaurants yet, he said. On the other hand, he declared it’s time to “double down” on outdoor dining.

The city had been set to move to phase three for reopening this coming Monday following the Fourth of July weekend. That would have allowed restaurants to reopen for indoor dining — though only at 50 percent seating capacity.

But with coronavirus infections surging scarily around the U.S., the mayor said it’s best for now to hold off on indoor dining until “the right moment.”

“We know a lot of other parts of this country, very sadly, made decisions [on reopening] based on something other than the data and in the heat of the moment,” he said. “And now what we’re seeing in Florida, what we’re seeing in Texas, even California that tried really hard to get it right, slipping backwards.”

De Blasio said the data in those and other states have not been just bad but “shockingly worse.” He noted that Dr. Fauci is now warning of the possibility of 100,000 new COVID-19 cases in the U.S. per day.

Fauci has singled out bars as a major problem in terms of where the virus is being spread right now.

“We see a lot of problems and we particularly see problems revolving around people going back to bars and restaurants, indoors,” de Blasio said. “And indoors is the problem more and more, the science is showing it more and more.

“So, I want to make very clear — we cannot go ahead, at this point in time, with indoor dining in New York City. … I was hopeful we could, but the news we have gotten from around the country gets worse and worse all the time.”

Meanwhile, New York, which had been the pandemic’s U.S. epicenter, has been doing it right and the data for the city and state keep getting better.

So, it’s time to “double down on outdoor dining,” the mayor said. So far, 6,600 restaurants have taken advantage of the city’s new Open Restaurants initiative.

The mayor said many more restaurants could benefit from the program and that the city is going to do “a huge outreach effort” to operators.

“It’s been going on for days,” he said of the outreach, “but it’s going to deepen over the next few days with the Department of Small Business Services and Department of Transportation going out into communities, helping to show restaurants that qualify that they can take advantage of this right away, get a lot more business and do it in a safe way, which is outdoors.”

The mayor said he’s bullish on the idea that the Open Restaurants program can help eateries survive and bring revenue to them while also bringing back jobs.

“Outdoor dining unquestionably has been a great hit,” he declared. “And I think the bottom line is that outdoors is working. Period. Outdoors is where we need to be to the maximum extent possible this summer as we fight back this disease.

However, the news won’t sit well with many locals, who charge the Open Restaurants program is lawless, with no enforcement of regulations. They say the sidewalk seating is both a health risk and a quality-of-license nuisance.