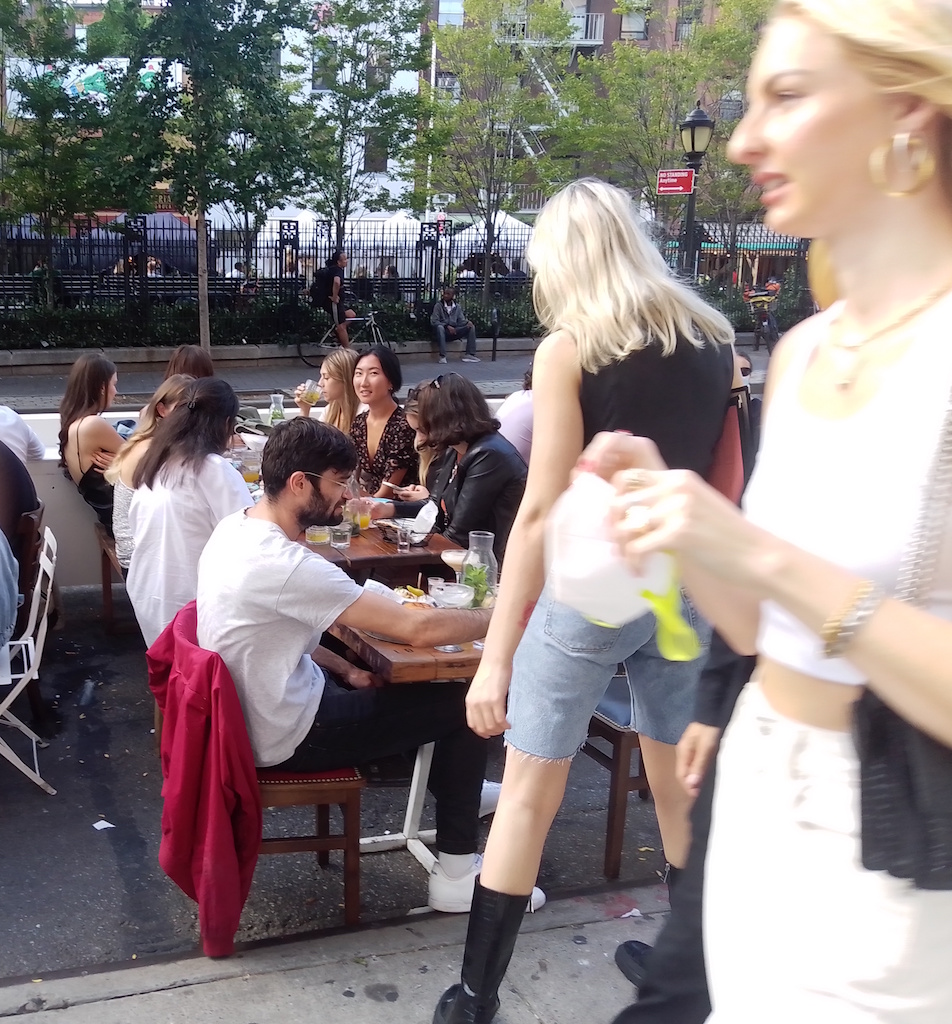 Outdoor diners on Cleveland Place in Petrosino Square last Saturday. The woman standing over the table, who reportedly was not masked up, is in violation of the governor's executive order that customers must keep their masks on until seated. (Photo by Georgette Fleischer)

Mayor bows to nightlife industry on outdoor dining; We pay the price

On Sept. 25, our increasingly autocratic mayor issued a triumphalist press release in which he announced — with no public input — that the NYC Open Restaurants and the Open Streets: Restaurants programs will henceforth be “permanent.” This morning, while in the roadway in front the building that has been my home for the past 40 years, where I had gone to measure the siting criteria overextensions of our ground-floor restaurant, one of the owners yelled at me, “Get off my property!” Goodness. I thought it was a public street.

Would it be fair to say Hizzoner has leant both his large ears to the New York nightlife industry? Melba Wilson, president of the New York City Hospitality Alliance, and owner of Melba’s Restaurant, where de Blasio and wife Chirlane McCray were photographed dining at the start of Open Restaurants in June, lends her voice to the press release rondelay. Wilson is followed by Robert Bookman, counsel of the NYC Hospitality Alliance, which community activists will recall as the New York Nightlife Association, until its name was groomed.

And then, among the other usual suspects (Hizzoner’s deputy mayors and agency commissioners and city politicians equally blinkered or obedient to his will), we have de Blasio’s own creation, the senior executive director of the Office of Nightlife at the Mayor’s Office of Media and Entertainment, former East Village nightlife owner Ariel Palitz, otherwise known as the “Nightlife Mayor,” giddily declaring “a new cafe culture.”

Ugly, really ugly. For instance, Petrosino Square, a small triangle that lies between Spring and Kenmare Sts., slivered between the border of Soho and Little Italy, between Lafayette St. and Cleveland Place, has eight licensed establishments, four of which take up frontage of four additional addresses and one of which takes up frontage of two additional addresses. That means that of 15 building fronts on our little “square,” 13 have outdoor dining in the roadway or sidewalk or both.

Even on a weeknight, the din is like a solid wall between me and my thoughts, between my little daughter and her sleep. The sidewalk in front of our building is greasy. The drone and rancid smoke of grease-trap cleaners is noxious daily. When their grinding garbage-truck compacters and warning beeps waken my daughter in the night, she declares yet another “big truck.” Some of her first spoken phrases have been “loud party” and “noise outside” and “loud music outside.” Yes, though the New York State Liquor Authority has officially prohibited it, we have a live jazz band playing each Saturday night from the CitiBike kiosk, and when it is not playing, three or four establishments compete with each other for the loudest amplified music, the establishment in our building hiding the speaker in a recessed planter inside the wall of their roadway cafe.

Press has sensationalized enforcement, mostly by the the S.L.A. But Petrosino Square has had none. After dozens of complaints through every channel offered to the public, we finally got one inspection by the city’s Department of Transportation, 50 days after the complaint was made, which declared that the licensee had been ordered to comply within 24 hours. Forty-eight hours later, D.O.T. declared the licensee to be in compliance. An hour after D.O.T. left, the licensee broke compliance. More than a month later, multiple attempts to get D.O.T. to take the further action of imposing a $1,000 fine have butted up against the doorstop of the mayor’s red-carpet treatment of the nightlife industry. He rules. Nightlife rules. The public? Drop dead.

Which is what is nearly happening to some. Never have I seen so many homeless on the streets, especially whenever I travel east and southeast. Not just a scattering of one or two, but whole “families,” groupings of three or more, mostly men, lying like corpses on the sidewalk in filthy clothing, under filthy “comforters.” The mayor, whose first election platform promised to heal the “Tale of Two Cities,” has presided over the worst income inequality in a century.

City services have never been more lacking in my memory. One of the sprinklers in the newly renovated De Salvio Playground has been broken since Tropical Storm Isaias at the beginning of August, and the scaffolding over the older children’s play features has been there for more than two years now, because de Blasio’s Department of Parks and Recreation defers to the long-delayed luxury housing construction abutting the playground to the south. Condos going for upward of $8 million rule over children’s access to a public playground.

Never have our city streets been filthier, with illegal dumping everywhere, overflowing litter baskets everywhere — that is, where they even exist anymore, many having never been returned after the widespread vandalism in June. My repeated experiences indicate that the city’s Department of Environmental Protection no longer functions at all. And let me not get started on the New York Police Department, which even The New York Times has noted is on work slowdown. Of course, many have noted that Hizzoner and a full day’s work have never kept company.

So the mayor’s becoming court jester for the New York nightlife industry at the expense of the workaday public should not surprise. But it dismays, nevertheless. He dismays.

And that’s not all. When this “temporary” initiative goes permanent, so will the roadway barriers. Except that “significant snow events may necessitate the temporary removal of some barriers from the roadway.”

The Centers for Disease Control and Prevention has determined that people who dine out — outdoor or indoor — are twice as likely to become infected with COVID. So nightlife’s entitlement to our public streets, and demands for 50 percent indoor capacity now and 100 percent indoor capacity by Thanksgiving, as reported by The Village Sun, constitute its greatest threat to the public good. It’s more important that individual restaurateurs can feed their families and feed them well than that other people’s families might sicken and die.

Around Petrosino Square, the restaurateurs are not the downtrodden “tired,” “poor” and “homeless” of the Emma Lazarus sonnet on the Statue of Liberty, but rather recent émigrés from privileged countries looking for the steep profits realizable in the richest city in the world, measured by the excessive wealth of its wealthiest. It is the wealthier and, in many cases, the idle offspring of the wealthiest, who people these eateries, not the lower- and middle-income residents of the walk-up tenements originally settled by Italian, Chinese and Dominican immigrants, who cannot for the most part afford to dine out. But it is those of us in the latter category, not those who live in Gracie Mansion or Gramercy Park, who pay — and will continue to pay — the heaviest price for the purloining of our city streets.

Thanks to Mayor Bountiful.