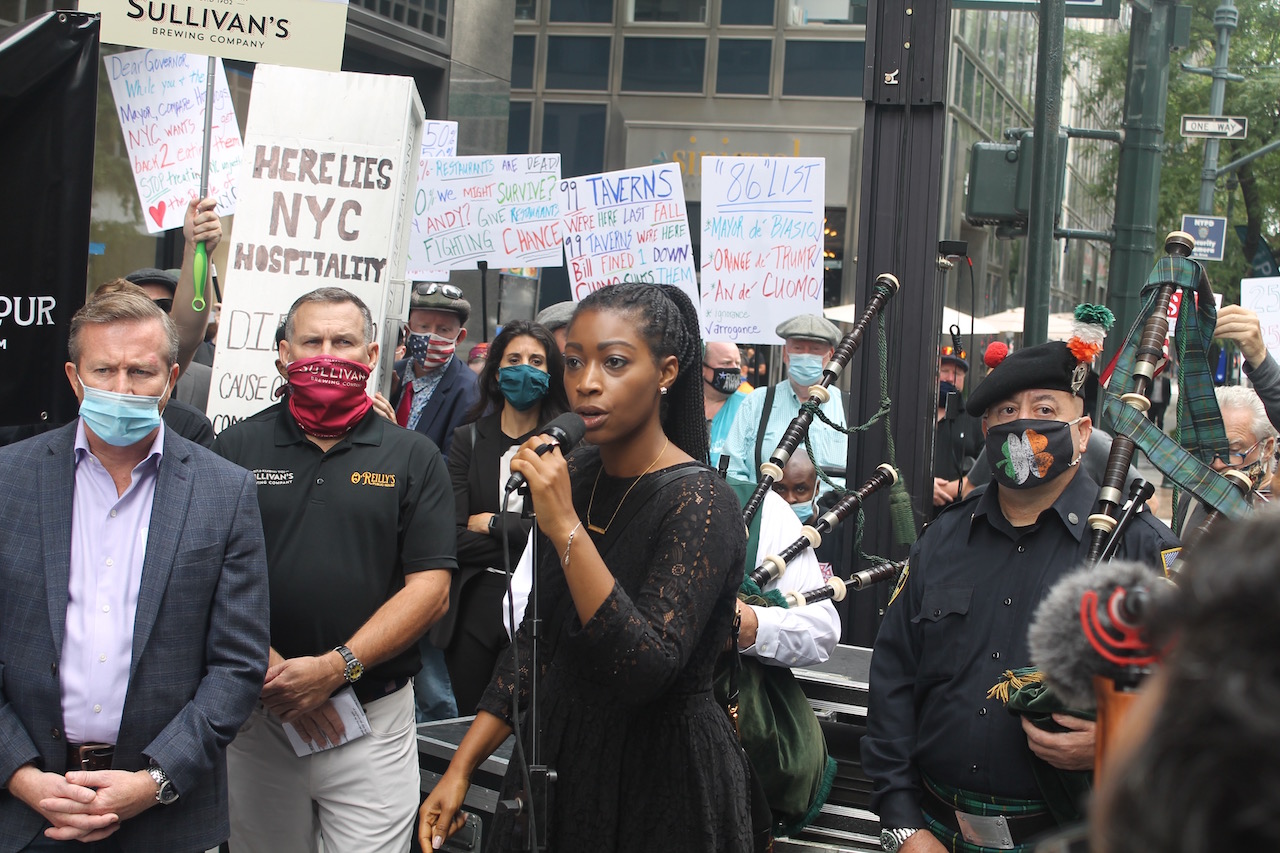 Oneca Lazarus led the bar and restaurant owners in chants of "50 percent now!" (Photo by The Village Sun)

BY THE VILLAGE SUN | With bagpipes skirling and a coffin marked “RIP NYC Bars and Restaurants,” hundreds of owners and staff from beleaguered Big Apple hospitality businesses marched to the governor’s Midtown office building on Monday morning. Rallying across the street from the Third Ave. building, they demanded that bars and restaurants be allowed to operate at 50 percent capacity and called for sorely needed economic relief.

“Ninety-nine taverns were here in the fall, 99 taverns were here…” the prop coffin’s pall bearers sang, to the familiar tune of “99 Bottles of Beer on the Wall,” as they counted down toward zero.

Earlier this month, Governor Cuomo announced that New York City bars and restaurants would finally be allowed to have indoor seating again — but only at 25 percent capacity — starting this Wed., Sept. 30.

But the operators at Monday’s rally said that’s not enough for them to survive. Plus, they said, they also need a financial relief package or they simply won’t make it.

Last week, Mayor de Blasio said outdoor service for restaurants and bars is now permanent, so can extend through the winter, with tents and heat lamps and propane tanks allowed. But Oneca Lazarus, vice president of Fox Lifestyle Hospitality Group and the rally’s emcee, blasted the governor and the mayor, leading the crowd in a chant of “It’s not enough!” and “Fifty percent! Now!”

Lazarus and other speakers said if 50 percent indoor seating capacity isn’t granted immediately, it will be a death sentence for most of Gotham’s bars and restaurants.

“We don’t need it in a month or two months — we need it right now!” she shouted. “We need to take care of our families.”

Lazarus later noted there were 300,000 hospitality industry workers in New York City before COVID-19 and that 175,000 have since been hired back.

Mark Fox, president of the hospitality group, said that the funding in the federal Restaurants Act is desperately needed and must be released, but that the bailout bill, which has bipartisan support, is being held up by Washington politics. The act earmarks $124 billion for restaurants nationwide.

Fox praised Cuomo for crushing the curve and bringing coronavirus under control in New York State, but said there’s more to the job.

If more isn’t done right now to save the bars and restaurants, Fox warned, “As the winter closes in this year, four of out five mom-and-pops will be closed. And the streets will be dirty. And the vitality of New York City will be gone.

But he said “the science” shows that indoor dining can be done safely, noting that Westchester and Nassau County, right on New York City’s borders, already allow 50 percent indoor dining.

“The governor in June gave 50 percent to the whole state — except New York City,” Fox said. “Long Island was packed all summer, 50 percent indoor dining, no spike. So the science is proven. You’ve proven it in the rest of the state. We need 50 percent today.”

The small business leader added that the federal Paycheck Protection Program, which helped operators pay employees during the pandemic, has run out, and operators are feeling the crunch.

“The PPP’s been used up now,” he said, “and the 25 percent [indoor dining] is not enough. It’s mathematically impossible to stay open.”

Deroy Murdock, who lives in the East Village, said he misses not being able to dine at his favorite places.

“I cannot cook,” he said. “I’m a patron who loves to eat in restaurants.”

He lamented the loss of some of his favorite places, including Porsena, on E. Seventh St.

Murdock is a Fox News political commentator and contributing editor at the National Review. Not surprisingly then, he teed off on the mayor for last month calling indoor dining “a very optional activity, [which] some people do a lot who have the resources and others can’t do it all because they don’t have the resources.”

“Bill de Blasio is no friend of the restaurant industry,” Murdock declared. “What about all the waiters, busboys and dishwashers who are suffering while you get your Bolshevik rocks off?”

Michael Meade is C.E.O. of Sullivan’s Brewing Company, which has three establishments in Lower Manhattan and Downtown —Porterhouse Brew Co., Top Hops and Monk McGinns. He cited the “alarming unemployment rate” within the industry due to the pandemic and the failure to reopen, and said it’s caused a ripple effect impacting many business sectors.

“Bars, restaurants, hotels, all the suppliers, even your landlords — the chain is terrible,” he said.

Businesses have had to bear the cost of paying for personal protective equipment, too, he noted.

“We need 100 percent [indoor seating] by Thanksgiving and the holidays,” Meade said, “or we’re in trouble. We’re already in trouble.”

Chris Page, the owner/operator of a business in the Fox group, White Oak Tavern, at Waverly and Greene Sts., came to the rally with his wife, Kerri, and two young children, Jackson, 5, and Nolan, 2. The bar/restaurant has outdoor seating, but it’s not enough to pay the rent, Kerri said.

Page said, even with tents and heat lamps, operating outdoor seating in the bitter chill of winter won’t work.

“At 20 degrees you’re going to sit under a propane heater?” he scoffed. “When the food hits the table it’ll be cold. If it’s that cold, you’re going to need heated tables.”

After the rally, Fox, head of the hospitality group, said, even if the money from the Restaurants Act is not released, there is still $380 billion left over from the Cares Act that could be tapped to help bars and restaurants.

“They just need to redirect that,” he said. “Cuomo needs to use his influence.”

As for why the governor and mayor are resisting 50 percent indoor seating here, Fox said they feel that because of New York City’s density and population, it would risk causing an infection spike.