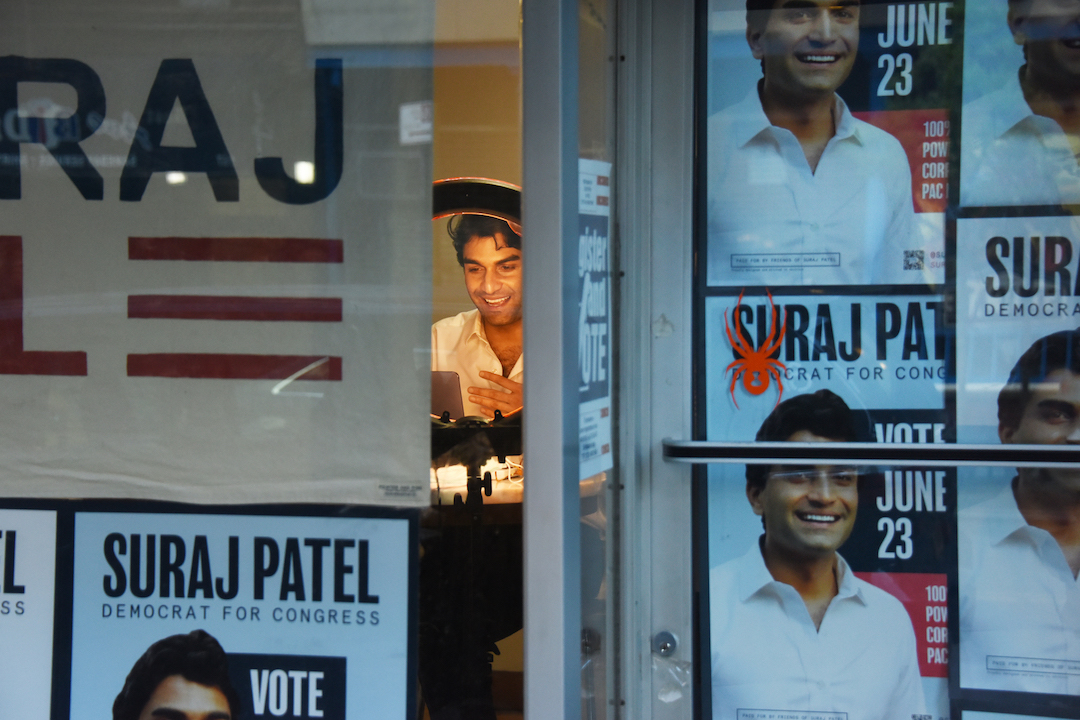 Suraj Patel was in his campaign office on Avenue B last month, apparently live streaming — and apparently enjoying it. After Tuesday's election, he and Congressmember Carolyn Maloney were separated by just a few hundred votes. (Photo by Bob Krasner)

BY THE VILLAGE SUN | It was a New York primary election like none other on Tuesday as voters went to the polls wearing face masks — at least, that is, those who had not already voted early or by absentee ballot as a health-safety precaution.

Due to the high number of absentee ballots, it was expected to be several days before winners were declared in some races. Election night results did not include absentee ballots.

Many voters who showed up at their usual poll sites were greeted by signs posted on the door telling them the poll had been moved to a different location, sometimes as much as 20 blocks away. This was apparently due to the consolidation of poll sites since far fewer voters were expected.

According to results gathered by the Associated Press, Joe Biden was declared the winner in the Democratic presidential primary with more than 67 percent of the vote.

Bernie Sanders came in a distant second with 19 percent, followed by Elizabeth Warren with 4 percent, Michael Bloomberg with 3.5 percent, and Andrew Yang with nearly 2 percent.

In the East Side’s 12th Congressional District, which also includes part of Queens and Greenpoint, longtime incumbent Carolyn Maloney was barely hanging on versus upstart Suraj Patel, with a razor-thin lead of just 572 votes. Lauren Ashcraft and Peter Harrison trailed far behind with 14 percent and 5 percent of the vote, respectively.

Two years ago, although Patel ran strongly in the primary, Maloney outpaced him by 60 percent to 40 percent.

Meanwhile, in the West Side’s 10th District, which also takes in some of Brooklyn, Congressmember Jerrold Nadler had an easier time of it, winning 62 percent of the vote. Challengers Lindsey Boylan and Jonathan Herzog racked up 26 percent and 13 percent, respectively.

In House District 7, Nydia Velazquez was declared the winner. She handily won reelection with 80 percent of the vote against challenger Paperboy Prince. District 7 includes most of the Lower East Side, plus the public-housing developments east of Avenue D in the East Village, as well as part of Brooklyn.

State Senator Brad Hoylman appeared to have coasted to reelection versus Liz Glass. He had 66 percent of the vote to Glass’s 34 percent, but apparently absentee ballots still needed to be counted to make it official.

Shunning the label “anti-vaxxer,” Glass instead characterized herself as “pro-health choice.” Whichever term you used, however, vaccinations clearly were a central plank of her campaign. She expressed concerns, for example, over mandatory COVID-19 vaccinations.

And her candidacy was championed by vaccination foes. One of them, blogger Fed Up Democrat, trumpeted Glass’s performance, headlining his report, “Liz Glass Gets Huge % of Vote!”

“From out of nowhere, with hardly any funding, Liz Glass came and stole 30% of the vote from Brad!” the blogger crowed. “That’s a wound — and not just a flesh wound, it’s a deep, serious wound.”

However, several of the challengers in local races — also first-timers — got around 30 percent or more versus incumbents.

Hoylman last year sponsored legislation that overturned the religious exemption for student vaccinations in New York State. That infuriated vaccination opponents, who decided to run candidates against him and others who advocated for the bill.

The state Senate district stretches from the Upper West Side down to Hudson Square and the East Village and includes Stuyvesant Town and Peter Cooper Village.

In a statement Tuesday night to The Village Sun, Hoylman said, “I’m humbled by the prospect of continuing to serve this vibrant Senate district in Albany. It’s premature to declare victory until every vote is counted, but I’m grateful to all the voters in the 27th Senate District who voted in person to keep me as their senator by a margin of 2-to-1.”

The Village Sun tried to contact Glass during the campaign but she did not respond.

In Assembly District 65, including the Lower East Side and the Financial District, incumbent Yuh-Line Niou held off Grace Lee with 62 percent of the vote to 38 percent.

In a race for an office that many voters don’t know much about, but was hotly watched by local politicos, Rachel Lavine appeared to have withstood a feisty challenge from activist Penny Mintz for Democratic State Committee for the 66th Assembly District, which mainly includes the Village.

State Committee members — who are unsalaried — hash out the policy positions for the state’s Democratic Party, among other things.

At around 10:40 on election night, Lavine said it looked like she had taken 67 percent of the vote.

Two years ago, Mintz was kept off the ballot by a technicality because her petition signatures failed to state her gender. (Each district has a male and a female state committee person.) She challenged the ruling in the courts, but lost.

The race suddenly became heated after Mintz penned an op-ed for The Village Sun in which she accused Lavine of sending her son to private school and not supporting public education. Outraged, Lavine and her wife, attorney Roberta Kaplan, called it a low blow. Kaplan responded with a statement noting their son has special needs that public schools could not meet — plus had been homeschooled until this past fall anyway.

“It’s very early, and it’ll be a while before the absentee ballots are counted,” she said. “But if the numbers are anything like the counts at P.S. 41 and P.S. 3, Rachel is the victor. Congratulations to Rachel.”

In a statement to The Village Sun, Lavine said, “I am so grateful for the confidence in me that the voters of the 66th Assembly District showed today. It is clear that the issues that I have worked so hard on — a moratorium on fracking, marriage equality, getting rid of the so-called Independent Democratic Caucus — are ones that matter to the progressive voters of my district.

“I am also so appreciative of all the community support I received, from my home club, the Village Independent Democrats, the Downtown Independent Democrats, all the local elected officials, my friends and neighbors, and most especially my wonderful wife Robbie Kaplan. It truly takes a village,” Lavine said, “and I am honored to be able to continue to represent the Village and the rest of Downtown Manhattan at the Democratic State Committee.”

Asked if it was possible that the absentee ballots could somehow change the outcome, Lavine remained confident.

“I don’t know — we worked really hard to get people to apply for and fill in their absentee ballots, so I might have a bit of an edge there,” she said. “But Penny Mintz would have to get an enormous amount of absentee votes to beat me at this point.”

In an internecine battle within V.I.D., District Leader Arthur Schwartz backed Mintz, while the club endorsed Lavine for re-election.

After the polls had closed Tuesday evening, Sean Sweeney, a leading member of D.I.D., fed The Village Sun some snapshots of results from the St. Anthony’s Church poll site in Soho. The poll site has 10 electoral districts, including Soho, the South Village and one in Noho.

The tallies were low obviously due to so many people having voted early or by absentee ballot, but Glass got just as many votes there — eight — as Hoylman.

Asked his thoughts about that, Sweeney said, “It reminds me of H. L. Menken’s quote: ‘Nobody ever went broke underestimating the intelligence of the American public.'”

At the polls, voters were handed a special pen with  a rubber tip to sign their name on a touchscreen — thus avoiding having to actually touch the screen with their fingertip. They then also used the same pen to fill out their ballots — after which they were told to keep the pen.