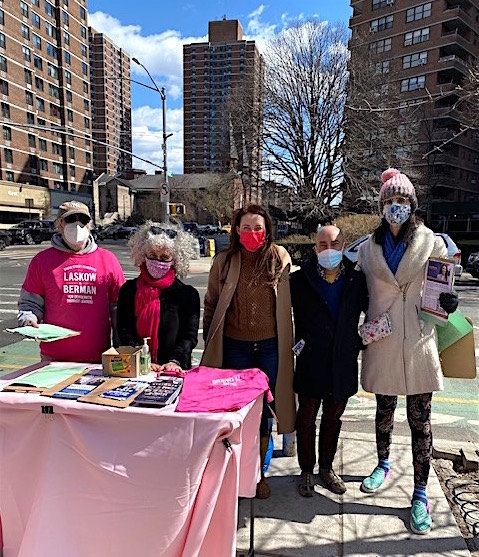 BY THE VILLAGE SUN | Lindsey Boylan may well have helped author Andrew Cuomo’s exit from the governor’s mansion. Sunday morning, though, she was gathering petition signatures on the Lower East Side.

The Cuomo accuser and borough president candidate joined the Grand Street Democrats at Grand and Clinton Sts. They collected voters’ signatures to get candidates — including herself — on the ballot for the June 22 Democratic primary.

Boylan, who lives in Chelsea, was the first former Cuomo aide to raise charges of sexual harassment against the governor.

The club endorsed her for election in February. Two weeks later, she accused Cuomo of creating an environment of sexual harassment, including giving her an unwanted kiss on the lips and suggesting they “play strip poker” during a flight.

Boylan recently threatened to start a PAC to target Senators Chuck Schumer and Kirsten Gillibrand for not calling on Cuomo to resign, but then last Friday they called for him to step down.

In a since-deleted tweet, she criticized President Biden and Vice President Kamala Harris for not doing the same.