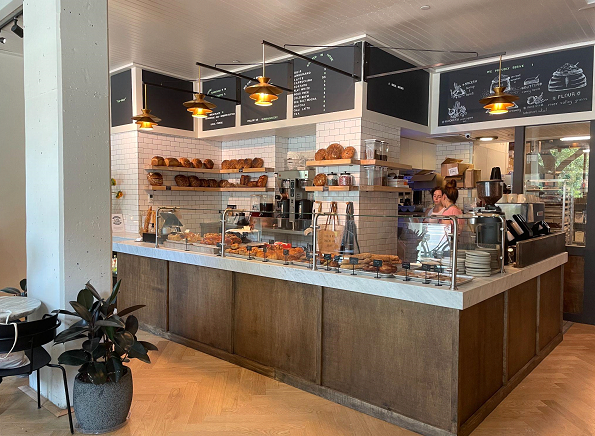 BY GRACE SYMES | Rows of freshly baked bread loaves sit on wooden shelves. An assortment of pastries nestles together behind a glass pane — croissants, cookies, babkas and danishes. As the staff bustle around behind the counter, customers munch on their treats and chat.

It’s just another day at Librae Bakery, the new “third culture” bakery that opened at 35 Cooper Square, near E. Sixth Street, a block south of The Cooper Union Foundation Building, this May. Librae aims to bring something unique to the area — a bakery that prides itself on its “Bahraini hospitality, Danish technique and New York energy.”

Dona Murad and Andre Gerschel, the couple who own Librae, want to bring their own eclectic mixture of heritages — which include Bahraini, Persian, Indian and Moroccan — to their customers, in the form of pastries.

“I mean, we have za’atar, we have pistachio rose, we have labneh,” Murad said. “And we have bagels and babka, we have like all the worlds brought together in sort of one space that we associate ourselves with, or we identify with.”

As for Bahraini hospitality, they want customers to be able to come in and spend time in Librae, not just pick up a coffee and go.

“In the [Persian] Gulf, coffee bars kind of take over the same social impact value as bars,” Gerschel explained. “Coffeehouses are meeting points and destinations to socialize and gather.”

But the highlight of Librae is, of course, its bread and pastries. Early fan favorites include a lumee babka — which combines black lime, a spice used in traditional Bahraini cooking, and lemon curd — a rose and pistachio croissant, and a Levantine sesame bagel with labneh (thick yogurt), silk chili and olive oil.

“We have a lot of bold flavorings,” Gerschel noted. “We have 23 things at any given point on display.”

Librae workers bake up to eight times throughout the day, meaning everything on display has probably been out of the oven for under an hour. The couple play around with new flavors constantly, and create frequent specials based on what’s available at the Union Square Greenmarket. Their flour is usually freshly milled daily.

Murad and Gerschel always planned to eventually open something in New York, Gerschel’s hometown, but it was a stroke of luck that pushed them to make their dream reality.

“The landlord of the building came to us and approached us initially to try and help consult for them to make the space more restaurant friendly,” Gerschel said. “And when we saw the space, we were like… .”

“…Can we take it?” Murad finished, laughing.

Librae isn’t the first time the pair have opened a business: Murad runs coffee roasteries in her native Bahrain, and Gerschel worked in restaurant management in the U.K. and the Persian Gulf. They said opening a bakery in New York wasn’t too different from opening a business anywhere else. However, at a time when inflation is challenging small business owners and customers alike, the couple wanted to make sure that what they were selling was unique.

“You can get a croissant or a cup of coffee, theoretically, at many, many, many other places,” Gerschel said. “We really wanted to do something that was exceptional and unique and very, very high quality.”

Librae’s products aren’t exactly cheap — most of the pastries range from $5 to $8 — but the couple say it’s worth it, and customers seem to agree.

Before Librae officially opened, they were test-baking and giving away free bread and pastries. Gerschel said many of the people who received test-bakes came back after the place opened, and that they already have regulars.

“It’s been an overwhelmingly loud opening for people that don’t come from a big chain and don’t have years of experience,” Gerschel said.

After the official opening, Murad and Gerschel said locals have been more than welcoming.

“We had these wonderful people bring us kind of like traditional Ukrainian dumplings,” Gerschel recalled. “Another local couple made this like crocheted mat of our logo.”

As far as they know, Murad is the first Bahraini woman to open a bakery in New York, and newspapers back in the small Persian Gulf country, the Bahraini embassy and relatives of Bahrain natives have reached out in support.

“We put the little sun on our logo because Bahrain is a sunny island and it’s called the Island of Golden Smiles,” Murad said.

Librae hasn’t yet been open for three months, but Murad and Gerschel are already looking to spice it up. Down the road, they’re thinking about incorporating more breakfast sandwiches and breakfast plates, and even hosting pop-ups with Middle Eastern chefs.

But Gerschel was quick to clarify, “We’re gonna wait until everything is perfect to do that.”

For now, customers will have to content themselves with pastries and bread.