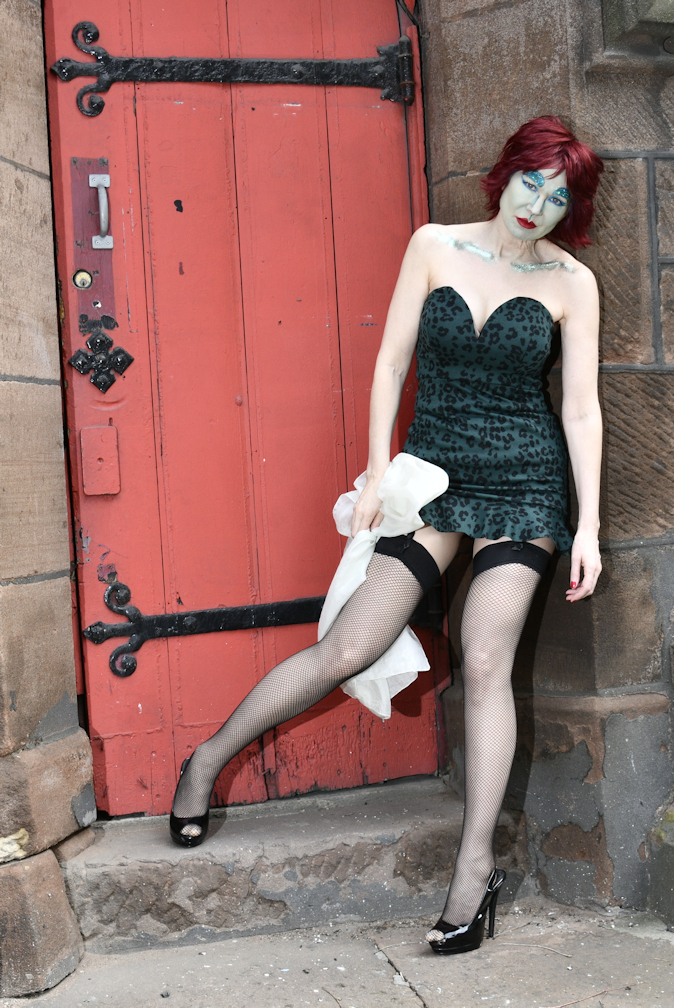 Sullied West Village model Karen Rempel is caught stumbling out of Limelight after the sun comes up. (Photo by Philip Maier)

Karen’s Quirky Style: In the Limelight…with a Beauty Bar chaser

BY KAREN REMPEL | Fifteen years after the final iteration of the infamous Chelsea nightclub in the deconsecrated Gothic Revival church closed, the wild energy of Limelight is still as infectious as the latest COVID variant.

The iconic New York City dance club Limelight opened at the corner of Sixth Avenue and W. 20th Street in 1983. In its ’90s heyday it was the place to hear cutting-edge techno, goth and industrial music. The scene spawned a collective of Club Kids who partied to excess, with nightly scenes, outrageous outfits, a shampoo room for getting down and bubbly, and the edgiest music and drugs.

My outfit this month is an attempt to replicate the look of a cross-dressing leopard on LSD that I think I would have constructed had I been lucky enough to go there. The club’s core coterie were called Angels, and sometimes wings sprouted from their shoulders. Other times, I’m guessing their horns were on display.

Tragedy struck in 1996, and the 2003 movie “Party Monster,” starring Macaulay Culkin and Seth Green, captured all the sordid details. If you’re interested in the history of the place under impresario Club King Peter Gatien, also check out the 2011 documentary “Limelight.” There were a few more nightclub iterations under different names before the site became part of a fitness chain.

Today, Grimaldi’s operates a coal-fired pizza store at the spot, and still proudly displays a Limelight sign on the corner. I tried the pizza a couple weeks ago and was very disappointed when it arrived limp and soggy. The instructions said to heat it up in a frying pan with a bit of water. Not happening. People order pizza to avoid cooking and dishes. And I only live eight short blocks away. Geez!

But the vibes from Limelight resonate down through the years, baked into the brownstone blocks and seeping into your soul if you get too close.

After the photo shoot, my crew and I ended up having a very uncharacteristic six-hour daytime debauch. We wanted to go to Beauty Bar, after the great time I had there the previous weekend, but it didn’t open until 5 o’clock. Amy noticed that Coyote Ugly was open (it was resurrected at its new location at 233 E. 14th St. last June), and our party began there with margaritas and empanadas.

That was followed by champagne and manicures at Beauty Bar next door at 231 E. 14th. At $10 for a martini and manicure, this has got to be the best deal in town. This nail-friendly feature just restarted a few weeks ago after a pandemic hiatus.

After a few hours at Beauty Bar, I stumbled home, feeling like I was doing the walk of shame past my doorman, though the incredible spontaneous sequence had all happened in a single afternoon. New York City still knows how to party!