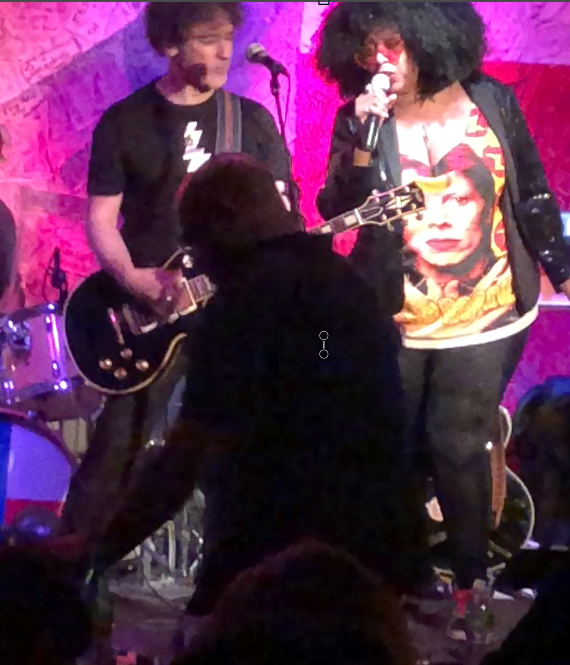 Bowie lives! 75th birthday show was out of this world

I was super-excited to go to a Bowie event again! Five years ago I went to a Bowie-themed roller disco night at Lakeside Rink in Prospect Park in Brooklyn. There were dozens of people dressed as various Bowie incarnations, from Ziggy Stardust to Aladdin Sane to Thin White Duke to the Blind Prophet (from Blackstar).

Expecting a lot of folks would similarly turn up in costume at Friday’s show, I put on my golden third eye, combed back my hair, and was ready to celebrate the universal Bowie soul with fellow devotees.

The party was in the cellar of the Hill Country Barbecue Market in Nomad, at 30 W. 26th St. Due to the O variant, this event was postponed four months from Bowie’s actual birthday, Jan. 8, to April 8. I showed up early to find that the crowd queued up to enter the space where the band was doing a soundcheck was strictly post-50s (like me). A few folks sparkled with glittery clothing, and some of the men were rock and rollers, but mostly just plain folks. I was a bit suprised that no one else had a gold circle on their forehead!

Here’s a 1-minute clip as DJ Crystal Clear takes us into the Bowie Zone on “China Girl,” and a trance dancer grooves up front. The band is having a blast! (Video by Karen Rempel)

It was such a fun night, with mostly Bowie songs but a few other classic rock tunes thrown in. Jeff said that he likes to include a few songs by musicians who were friends with Bowie. So we were treated to the Velvet Underground’s White Light/White Heat and to the classic Led Zep rocker Rock and Roll. That last one pulled me onto my feet, and I can only hope that no one took live footage of me dancing!

I really shook out all of the tensions from the past two years, letting it all roll out of my body, shimmying and shaking every inch, right down to my fingers and toes.

What a blast! The crowd was there to celebrate and party, and that’s what we did. People were dancing in the aisles, at the sides, upfront. The performers brought their unique interpretations to many favorite Bowie tunes, from deep cuts like “Cracked Actor” to the earth-shattering “Life on Mars” to his final masterpiece, “Lazarus.” I loved every minute of it.

After the show, some of us went to an afterparty at Beauty Bar, at 231 E. 14th St., by invitation of the gorgeous and talented Bowie performer Michael T, who was DJ’ing the late set there after his performance at Hill Country. This was a much younger crowd of mostly 20-somethings, getting down to the ’80s tracks that Michael T spun for us. They knew all the words to classics like The Romantics’ “What I Like About You.” I was blown away!

I danced and had scintillating drunken conversations with my friends until about 2 a.m., then walked home along 14th Street in a light rain. Carl, a vendor at a halal food cart at Union Square, was sending delicious aromas of fried onion into the empty street. I got falafel and rice to absorb some of the alcohol, and ate as I strode through the dark and gleaming streets of the Village. A perfect ending to a perfect New York night!