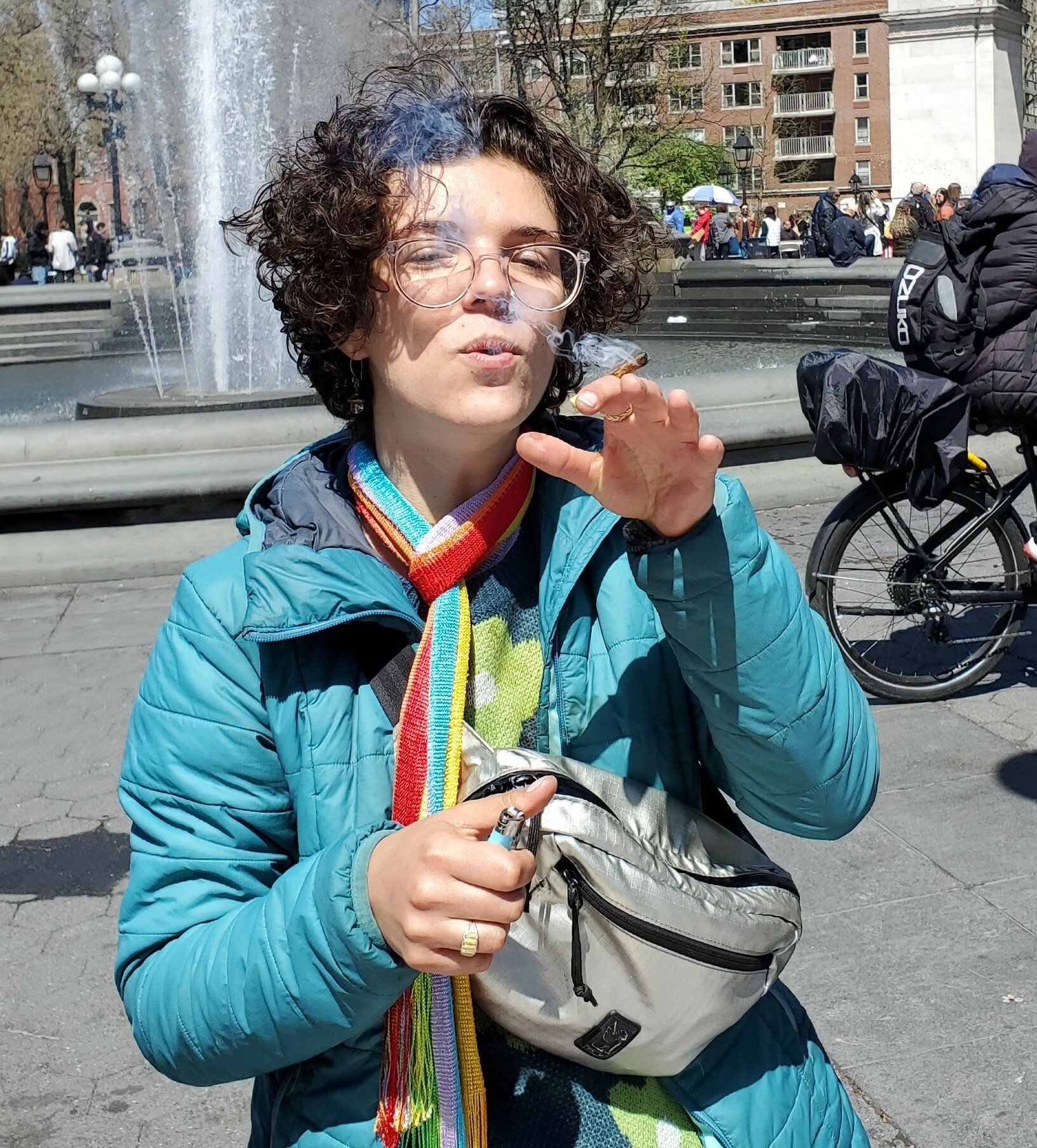 Justice Maltese demonstrated the use of one of her Infinity Joint-Holder Rings in Washington Square Park on 420. (Photo by The Village Sun)

‘It’s our national holiday’: Pot scene was alight on 420 Day in Washington Square

BY LINCOLN ANDERSON | The weather was blissfully beautiful Wednesday — and many of the parkgoers filling Washington Square were definitely feeling blissed out.

It was April 20 a.k.a. 420 and pot was being sold and smoked, also snacked on in numerous ways, smeared on skin in lotions and generally celebrated.

The term 420 dates back to 1971 and refers to the time of day, 4:20 p.m., when a group of California high school students would regularly gather to toke. The cannabis code word eventually became associated with the date April 20, as in 4/20, or 420 Day, which is today the occasion for weed celebrations around the country and even on other continents.

Recreational pot is now also legal in New York, having been approved under Governor Cuomo one year ago. Licenses for state-approved pot dispensaries are expected to start rolling out this December. In the meantime, though, “budding entrepreneurs” have been selling outdoors all over the city, including, notably, in Washington Square Park.

However, the Sixth Precinct’s commander, Captain Stephen Spataro, recently declared “zero tolerance” toward open pot vending in the landmark Greenwich Village park, after two incidents earlier this year when armed robbers target weed vendors there. In the first, in January, a crew of muggers, one of whom brandished a gun, tried to steal a pot vendor’s backpack, but the man ran away. In February, the same alleged group succeeded in stealing $900 worth of ganja-related goods from a park pot vendor, including rolling trays, ashtrays, keychains and such. Both incidents occurred at night. In short, Spataro warned, the pot “gray market” — as in, unlicensed pot sales — could attract crime.

But on Wednesday afternoon, there were no police or Parks Enforcement Patrol officers to be seen around the park’s central plaza. Instead there were wall-to-wall vendors’ tables ringing the fountain. They were offering pre-rolled joints, THC-infused edibles and creams, CBD products — for humans, even for pets — and much more marijuana-related fare.

In fact, one group of vendors said they had actually applied for and breen granted a proper, one-day vending permit from the Parks Department — and that they had been upfront about planning to sell pot products.

One of them, Antonio Martinez, said he and his sister Teresa Montella, along with boss Nicole DiMonda, had paid $20 for the Parks permit. He said that not only did they have a valid permit, but that it would be unconscionable for police to hassle people on this day, 420.

“Seventy-five percent of the people are smoking,” he said approvingly, gazing out over the park crowd. “The weather’s beautiful, no one’s fighting.” Plus, he added of 420, “It’s a national holiday.”

Actually, 420 is not a federal holiday — at least not yet. But at the rate things are moving on the legalization front, who knows?

Montella, his sister, is an “herbal infuser” who adds THC or CBD to teas, candy and other products. The company’s founder, DiMonda, is a firm believer in the curative powers of cannabis, saying it saved her life when she was diagnosed with breast cancer. Their products can aid kids with illnesses, too, Montella assured.

Justice Maltese, 29, another young “budding businessperson,” was selling special jewelry, as well as special joints. Her new invention, “Infinity Joint-Holder Rings,” were going for $30 to $45, in copper, silver and gold.

“Yeah, I just came up with this design yesterday,” she said, “two different-size holes — for filter or nonfilter [joints] — in the infinity symbol.”

She was also hawking her “Enchanted Smokes,” herbal-infused spliffs. She grinds the herbs herself to ensure the best burn.

Justice, who lives in Brooklyn, grew up in Soho with her photographer parents until age 4, when they moved to another part of the city. Relishing the park’s energy and atmosphere Wednesday, she vowed its new “weed world” would persevere.

“I mean it’s 420,” she enthused. “We outside, you know! In the park today. They can’t crash the party, it’s our national holiday.”

As for where Washington Square Park ranks in terms of the city’s outdoor pot markets, she said it’s the tops.

Technically, though, vending — except for First Amendment-protected, expressive matter, like art — isn’t allowed in the park.

“Right now, we’re trying to keep the culture alive,” Justice declared. “Artists and vendors will fight to be here.”

Although 420 admittedly saw more pot selling than usual in the park, other vendors, like Justice, predicted Washington Square would remain a booming scene, especially once summer hits. One man with a thick dreadlock draped in front of his left shoulder who was selling three joints for $15 — “420 special,” he said — agreed the cannabis casbah would continue.

“[When it’s] nice weather, it’s like this,” he said of the bustling marijuana market.

Asked if the police ever hassle him, he said yes, but that he’ll just come back to the park and continue vending after they leave.

One couple, who gave their names as Jump Rope and Rabbit, were offering organic and vegan mini shortbread cakes, either infused with THC or without. It was their first day doing it in the park. Jump Rope said selling their Baked Botanicals products beats trying to make a living selling art.

“Last year I was selling drawings out here but I didn’t make too much,” she said. She stressed that she only “takes donations.” However, Captain Spataro previously said that line doesn’t work with police, since it’s still “an exchange of money for marijuana.”

Sporting his bespoke “Stoners” motorcycle club-style vest for the occasion, Larry Reddick a.k.a. “Larry the Pigeon Guy” was soaking in the 420 vibe in the park. Sticking out his right forearm, he proudly showed off a tattoo of a big pot leaf, explaining what the initials “O.B.T.S.D.” above the “Local 420” stand for.

Asked how he was enjoying Wednesday’s park scene, he crowed, “I love it, f—! I remember when we used to have to hide to smoke it.”

When not celebrating 420, Reddick can often be found in the park with pigeons perched on his head and arms, posing for tourist photos.

Jade, who only gave her first name, had a novel method for trying to dodge a ticket — she was going mobile. She was toting a custom-made carrying case containing edible treats.

A preppie who grew up on the Upper East Side, she attended Horace Mann School. She has worked in bakeries, which led her to creating edible pot treats. The marijuana, she explained, also goes farther if it’s baked since smoking pot necessarily burns up a lot of it. She plans to attend medical school and go into psychiatry.

Sitting on a bench and enjoying a joint he had brought with him, Henry Romano, 25, had come from deep Queens for the day. He currently attends Nassau Community College.

“My friend from Pennsylvania wishes they had this,” he raved of the smokin’ park scene. “I’m coming all the way from Far Rockaway.”

The Sixth Precinct did not immediately respond to requests for comment on 420 Day in the park.