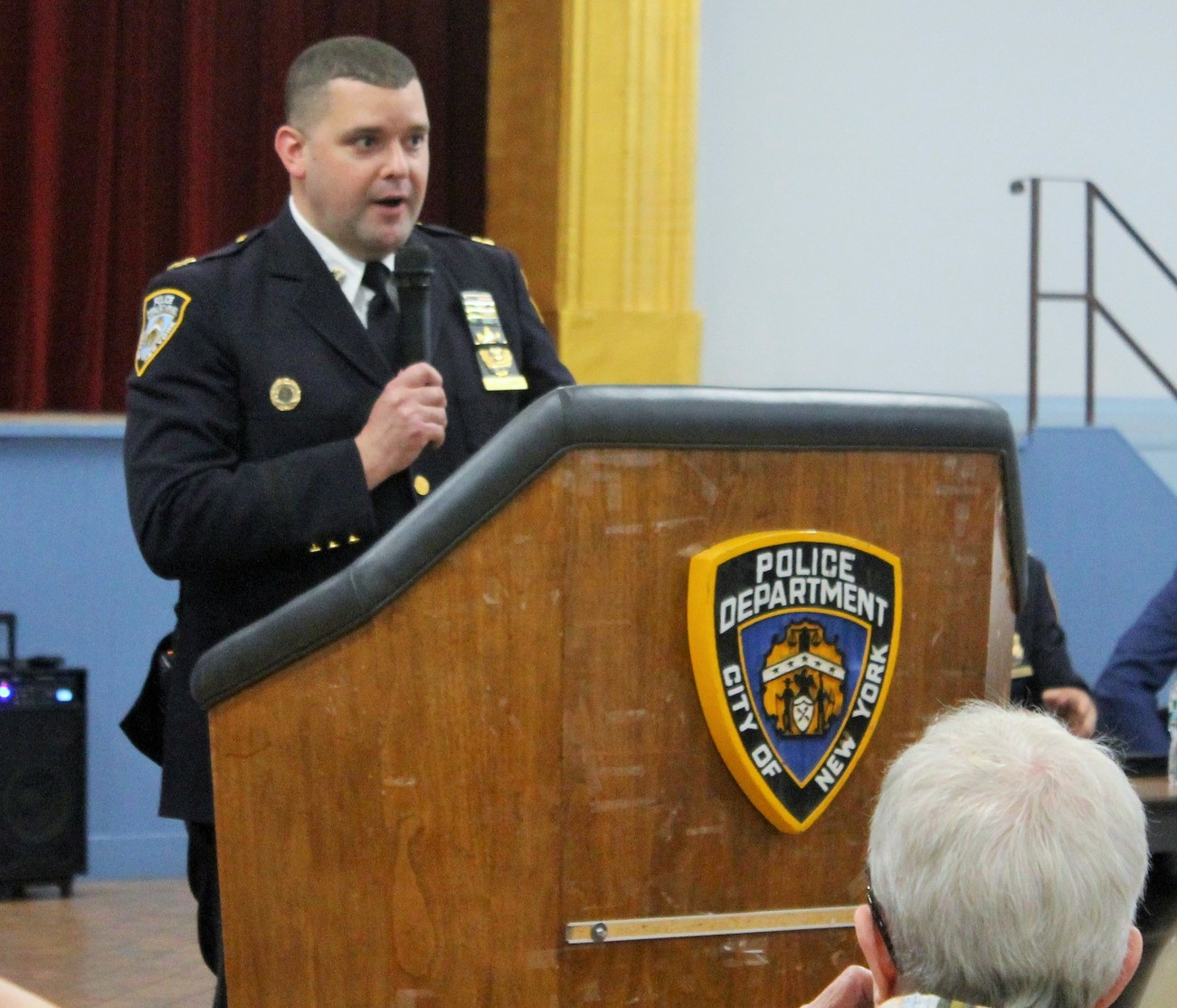 Captain Stephen Spataro speaking at the big police-led meeting on Washington Square Park at Our Lady of Pompeii Church last June. (Photo by The Village Sun)

BY LINCOLN ANDERSON | It looks like the cannabis casbah in Washington Square Park is going up in smoke.

Saying it’s important to snuff out sales of “blackmarket” bud in the park, Captain Stephen Spataro said his officers now are taking a “zero tolerance” approach to marijuana vending there.

The commanding officer of Greenwich Village’s Sixth Precinct pointed to two gunpoint robberies of pot peddlers in the park so far this year as examples of what can happen when an unregulated marijuana market is allowed to take root.

In the first incident, on a snowy night on Jan. 23 around 8 p.m., two men, one with a gun, tried to steal a pot vendor’s backpack, apparently after he had packed up his merchandise for the night. The vendor ran away from them, though, and an hour later reported the attempted theft to police.

More recently, on Feb. 16, around 10 p.m., three men, two with guns, held up a pair of weed vendors in the park, a man and a woman. Police only discovered this robbery by chance, according to Spataro, after they arrested the vendors — for driving a car, a blue Toyota sedan, in the park, the assumption being that it was to load up their stuff.

After being taken to the precinct, the pair told police they had been robbed of 15 ashtrays, 15 rolling trays, keychains and various pot paraphernalia, totaling $900 in value — though they did not mention anything about any pot being taken. But the Sixth Precinct C.O. said it was clear they were pot vendors. Police seized the Toyota.

The two robberies are connected, according to police. In each case, the thieves fled in cars.

Recreational weed was legalized in New York this past September. The plan is for marijuana to be sold at dispensaries, with the sales tax going into the state coffers. However, no dispensaries have opened yet. Meanwhile, during this current “gray area,” people are selling reefer pretty much everywhere — in parks, on sidewalks, from trucks, by delivery service, in smoke shops, even in corner delis and bodegas. However, an East Village smoke shop owner told The Village Sun that much of what is passed off in stores as legit weed is really Delta 8, which is a milder form of the THC that’s in real pot, which is technically known as Delta 9.

At a recent benefit for the East Village’s Theater for the New City, Manhattan Borough President Gale Brewer, in her remarks to the audience, quipped that there was a truck nearby selling pot — and that people should go avail themselves of it.

“They’re all selling marijuana illegally,” she said, “and it’s wonderful. We don’t know what to do with them — but go ‘give a donation.’”

However, Spataro told The Village Sun regarding the park, “It’s still illegal to sell marijuana. As with any blackmarket, there could be associated violence. The gunpoint robberies are proof of that. We want to stay on top of that, which is why we are doing zero tolerance.”

It’s also illegal to vend in the park, in general, unless one is selling First Amendment-protected “expressive matter,” like books or art.

The captain is actually eagerly awaiting the opening of pot dispensaries, feeling that the legalized sales will cut down on guerilla grass vending.

“Eventually, there will be a way to buy it legally,” he said. “I hope it’s sooner rather than later.”

Meanwhile, in line with Brewer’s remark, some of the park pot vendors try to say they are merely accepting donations in return for giving people ganja. But Spataro said it’s still illegal since it’s “an exchange of money for marijuana.”

As of the end of last month, Spataro has assigned a team of officers to the park, one sergeant and six cops. They are concentrating on a few specific areas: drugs, general quality of life, loud music and closing the park for its nightly curfew.

“We are focusing on the consistent closing time, amplified sound and the drugs, dealing and using,” he said.

Last summer, the police who were detailed to the park at night often hung out under the arch, within a perimeter ringed by moveable metal gates. But that’s not the way they’re doing it now.

“They’re not glued to the arch,” the captain said of the officers. “I want them all through the park — particularly the west side.”

He said that police, for a period of time, did do an “education campaign” with the park pot vendors. But that’s over now.

“We’ve moved past giving warnings,” he said. “Now we’re just arresting them and seizing their tables and paraphernalia.”

Pot vendors selling from tables previously told The Village Sun that police, from time to time, would just tell them to “pack up” their wares — but that, once the cops left, they would simply return to the park to continue hawking their hash. But that has changed, the captain explained.

“Because people were coming back [to the park], we had to start summonsing them and seizing their property and tables and taking it back to the precinct,” he said.

The vendors are aware of the cops and have their tricks. One was displaying his pot on the back of paintings laid on top of his table, quickly flipping the canvases over if cops came by, in order to look like an art vendor.

One pot seller manning a table Monday night said he was “new” to vending in the park. An ironworker, he said he had heard about the open weed-vending scene and wanted to make some extra income. He chose to come out later in the evening when there was “less competition” in the park.

“Flowers!… Pre-rolls!” he called out to passersby.

The flowers were prepackaged buds. He, too, was enthusiastic about the dispensaries’ arrival, saying he hoped he could get a license to operate one of the cannabis companies, which could even set him up with a pension plan.

But the number of pot vendors in the park appears to have dropped from its high point last summer, possibly due to the stepped-up enforcement, maybe also just because it’s still cold outside.

In addition, Spataro said there is also “zero tolerance” for amplified sound and drinking alcohol in the park.

Large, exuberant, late-night parties in the park, as seen last summer after the grimness of the pandemic, have not been happening again, and the park has been closing on time, he said.

Spataro said his assigning the unit of officers to the park was not a direct response to the gunpoint pot robberies.

“I had been planning it for a long time,” he said, “but hadn’t had enough cops to do it until new officers completed the Academy and field training.”

One thing police are not allowed to enforce is the regulation against smoking cigarettes and marijuana in city parks. That has been left up to the Parks Enforcement Patrol, the green-uniformed Parks Department officers.

PEPs also handle enforcement against skateboarding and bike riding in the park — though there doesn’t always appear to be a “zero tolerance” approach on skateboarding.

Meanwhile, enforcement against hard drugs in the park is harder to do, mainly because of recent legal changes, Spataro explained.

“It’s an uphill battle,” he conceded.

As for heroin, police have to catch the users before they inject themselves. Users can no longer be arrested, as in the past, simply for possessing a syringe with heroin residue in it. The captain said this was a change instituted by the state Legislature late last year.

On the other hand, police still can bust someone for possessing a crack pipe with crack residue in it — yet the person no longer will face any penalties. This is a change “within the last few months,” according to Spataro.

As Spataro explained it, under former Manhattan District Attorney Cy Vance, crack-pipe arrests started to be prosecuted on a “case-by-case” basis, while under new D.A. Alvin Bragg, these arrests are simply no longer being prosecuted at all.

However, while cops are no longer allowed to bust people for having empty heroin syringes, they can and will still arrest them for crack pipes since the individuals “might have other warrants” for other offenses, Spataro noted.

There have been three reported heroin overdoses in the park so far this year, in January and February, including one incident where two people OD’d at the same time. Thanks to the use of Narcan, there were no fatalities.

On homelessness, some local stakeholders are hopeful that Paul’s Place, a new homeless drop-in center on W. 14th Street between Sixth and Seventh Avenues, will help alleviate the homeless crisis on Greenwich Village’s streets and specifically help the homeless in Washington Square Park, particularly in its northwestern corner. The facility, which will also include two-dozen stabilization beds, has been fully built out and was slated to open its doors this month but has not started operating yet.

But Spataro is taking a wait-and-see approach and, naturally, looking at it through a police lens. The worst scenario, in his view, is that the 14th Street facility becomes a “magnet” for quality-of-life issues.

“We see that there could be potential for community concerns with new homeless services there,” he said, “that it could lead to more homeless [on the street] there.”

Another factor affecting Washington Square Park is the change of mayoral administrations. Former Mayor de Blasio, according to police, “micromanaged” the park in a way that New York City mayors have never done before. This led, for example, on some nights last summer, to de Blasio deciding “at the 11th hour” not to close the park for its normal midnight curfew because it was still crowded with people. Now, under Eric Adams, according to police, that “aberration” of mayoral micromanaging of the park is over.

Of course, there were other factors at play last summer, too, in terms of how the park was policed, including the ongoing passionate protests over George Floyd’s police-involved killing in Minneapolis and the fact that many bars and nightclubs were still closed due to the pandemic while young people wanted a space to socialize, blow off steam and party.

Meanwhile, though, for some older Village residents, one issue remains their top scourge when it comes to the park — skateboarding. These frustrated locals simply want to enjoy the park just like everyone else but fear being knocked over and injured by the skateboarders, who are often doing wild, high-flying tricks better suited to a skatepark somewhere.

According to Evrim Can, the Sixth Precinct’s lead community affairs officer, the park PEP officers have been issuing tickets to skateboarders who are “repeat offenders,” meaning they have been warned before. Meanwhile, he said, regular police officers, again, are not getting involved in enforcement against skateboarding, instead focusing on the park’s “bigger problems.”