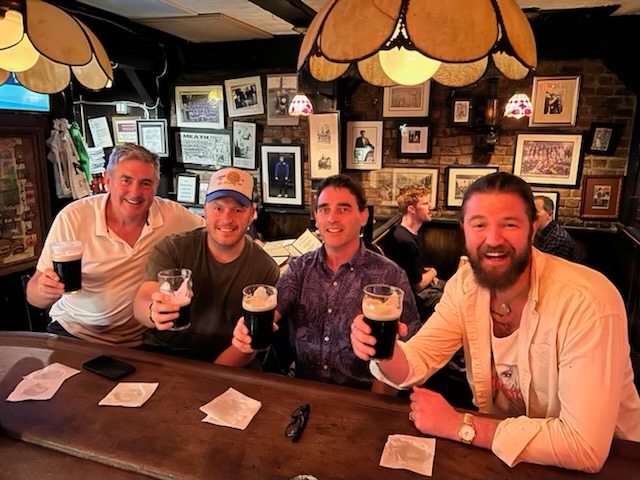 The Four Horsemen? Ronan Downs, at far left, heads a group of partners including, from left, Sean Connolly, Paul O'Connor and Jack Crown, all hailing from Ireland, with plans to revive the shutdown bar Percy's, at 13th Street and Avenue A. Brazilian Roberta Souza is also a partner. (Photo by Keith J. Kelly)

Irishmen get O.K. from C.B. 3 to open new restaurant on site of shutdown Percy’s on Avenue A

BY KEITH J. KELLY | A group of Irish restaurant owners moved a step closer to reopening a new establishment on the site of the shutdown Percy’s in the East Village after getting the nod from Community Board 3 at its Sept. 27 meeting.

“We’re very excited to be part of the neighborhood,” said Dublin-born Ronan Downs, who is heading the group of four expatriate Irishmen and one Brazilian woman behind the new bar/restaurant. Downs arrived in the United States on a soccer scholarship to SUNY Oneonta in the early 1970s. He began bartending at Dresner’s shortly after graduating. He then teamed up with a few other Irish-born barkeepers to open his first restaurant bar called ETC on the Upper East Side in the mid-1980s.

Since then, he has quietly emerged as one of the more active bar and restaurant owners in the city, as he teamed up with other partners to own the Stone Street Inn, Beckett’s Bar and Grill, The Dubliner and Route 66, all on Stone Street in Lower Manhattan, as well as co-owning the Tap Room, in Gramercy. Last September, he reportedly purchased the four-story building that houses the Stone Street Inn and three apartments above it at 52 Stone St. for $6.25 million.

Despite his group’s past successes, it was no easy task getting the community board’s nod for their new target establishment. As frequently happens at community board public hearings, many who turn out are vocal critics against bars in the East Village due to noise and rowdy patrons. Frequently, the only party advocating for its opening are the potential new owners and their attorney.

One objector at the public hearing in August presented a petition that he said was signed by more than 60 nearby residents objecting to granting a new license to reopen on the site of the old Percy’s, at 13th Street and Avenue A.

Still, after the August hearing the board’s State Liquor Authority Subcommittee on Sept. 19 voted 4 to 1 to recommend Down’s crew be granted a full liquor license to operate — with some important stipulations, including early closings during the week and a 2 a.m. closing time on Friday and Saturday.

They will also barred from holding happy hours and pub crawls and are required to have the restaurant open to serve food the entire time that the establishment is open.

“That’s fine with us,” Downs said of the restaurant requirement. “We are plannng to serve American fusion-style food — and at an affordable price point.”

That’s welcome news to Leo Scullin, who used to meet up with a group of 20 or so regulars from the Stuyvesant Town neighborhood after old local haunts on First Avenue, including the First Avenue Pub, Quigley’s and M.J. Armstong’s, all closed up shop and were replaced by chain stores or banks.

None of the nearby bars on the northern end of Avenue A, including The Spotted Owl Tavern, Drop Off Service and Spikes, offer food and all have late closings all days. The closest to food might be Spikes which offers peanut butter and jelly shots all day. Drop Off Service has a happy hour featuring a $3 draft beer and a $4 IPA called the Lion’s Head from 4 p.m. to 7 p.m. every day, but the only food to be had is a bag of pretzels or potato chips. The Spotted Owl cuts off their happy hour at 6 p.m. and also offers no food-like substances.

When The Village Sun set out to test the local community reaction following the full C.B. 3 approval, we found support for a new place — with even potential competitors applauding the move.

“I used to go to Percy’s all the time growing up,” said Laura Banker, a bartender at nearby Spikes. “It would be nice to see something reopen there again,”she said, as she served a man a beer.

“It’s always good to see more businesses open up,” the customer agreed, as he sipped on the pint.

Currently, Banker noted the former Percy’s metal gates are covered in graffiti art and it’s become a haven for sketchy people to lounge against the shutdown bar/restaurant day and night.

When told about the early closings and food being served, she said, “That’s perfect for us.”

The reaction was similar across the street from the old Percy’s.

“I live on 13th Street, right over there,” said Alex Baird, gesturing out the front window of The Spotted Owl, where he was tending bar. When told of the restricted hours, he noted, “That’s great. They can go there for food and come here to us after.”

Next door, sitting in the outdoor shed at Drop Off Service, Max Rafferty was sipping a $4 happy hour beer. When told that a new bar/restaurant could be opening directly across the street he said, “I’m all for it, why not?”

His friend, Angela Hoxie, sipping a dirty martini pointed out, “It’s always better to have a business and a storefront than nothing.”

Despite all the momentum that the C.B. 3 nod gives the liquor-license application, it could still be some months before the metal grates go up and the new restaurant finally opens. Sources tell The Village Sun that the S.L.A. faces a serious backlog in processing applications, which has been frustrating to tavern owners, who often must start paying rent months before they can open their doors for business.

“We expect it will be about six months before we open,” Downs acknowledged. “But it is an up-and-coming neighborhood, that’s what I like about it. We want to be part of the neighborhood as it comes roaring back in the postpandemic era.”