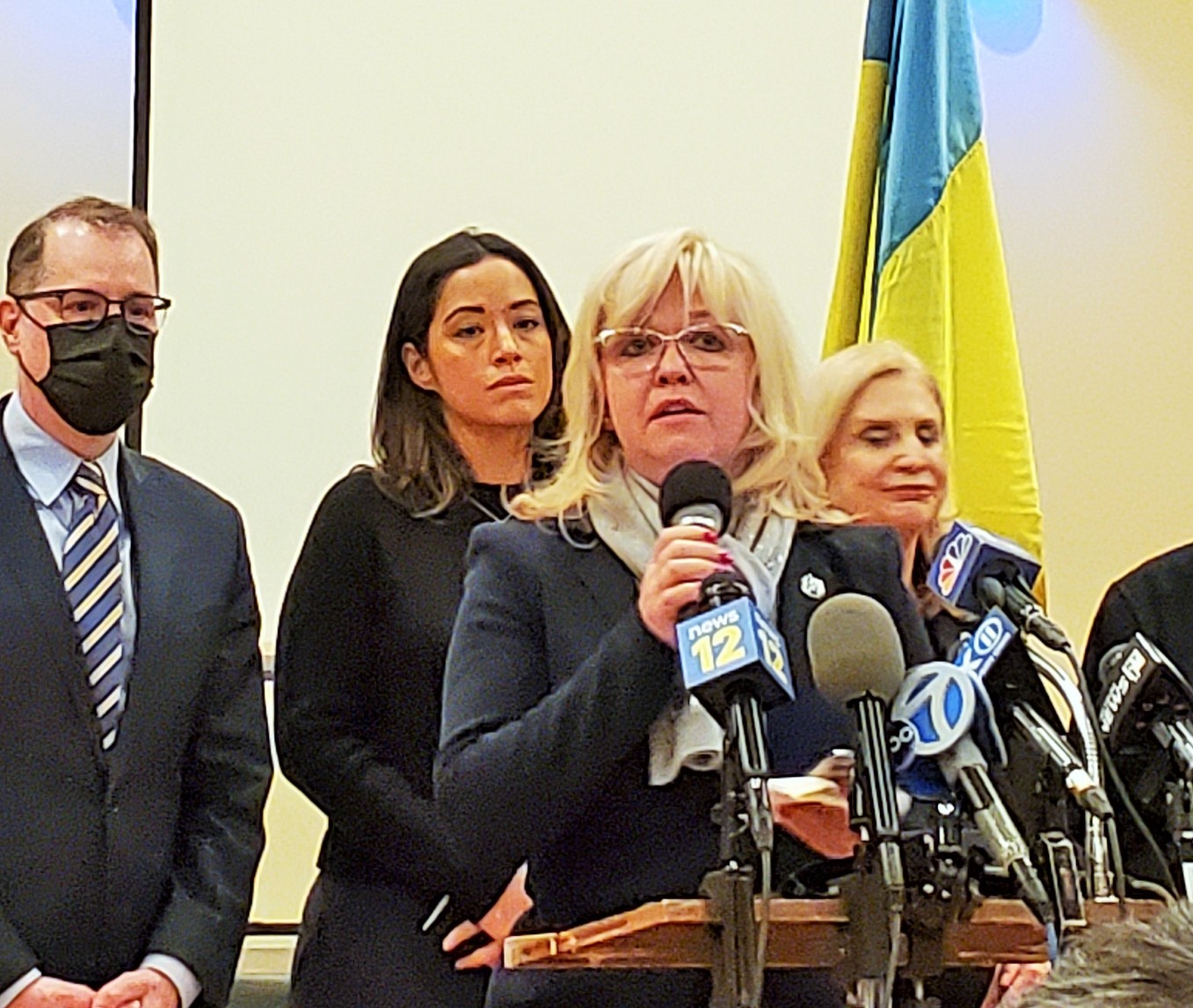 Bozena Kaminski, the national vice president of the Polish American Congress, warned that Russia's attack on Ukraine could "destabilize the entire region." (Photo by The Village)

BY LINCOLN ANDERSON | At a “Stand With Ukraine” event in the East Village on Friday, politicians, officials and local leaders said Putin must be fought on the land, fought in the air — and fought in the bank accounts of Russian oligarchs by seizing their assets.

Oleksii Holubov, the Ukrainian consul general, was joined by other Ukrainian leaders, allies and local politicians at the event at the Ukrainian National Home, at Ninth Street and Second Avenue.

The previous night, he said, had been the worst moment since 1941, when the Nazis attacked. More than 130 Ukrainians had already been killed. Cyberattacks were being waged.

“We will defend — we will definitely defend — our land,” Holubov vowed.

The consul general said “massive sanctions” must be imposed on Russia and that Ukraine needs “weapons, ammunition and humanitarian assistance.”

“If Putin is not stopped now, he will move further,” he warned. “All the European states will be at risk.”

Manhattan Borough President Mark Levine called the Russian strongman a “maniacal dictator.” He said Ukrainian immigrants in the U.S. must be given Temporary Protected Status, so they don’t have to return to their homeland while it’s under attack.

In addition, the borough president said, New York City, which is home to more than its fair share of powerful Russian billionaires, should go after their holdings.

“We need to seize those assets right now,” Levine declared. “It’s not just London, it’s not just Miami. New York, I’m sorry to say, has been a home for this circle of oligarchs around Putin.”

Councilmember Carlina Rivera, who represents the East Village, said, “There is no room for anything but unequivocal condemnation for this senseless violence.”

I have the distinct honor of representing Little Ukraine, a vibrant and resilient community with generations of history in the East Village.

My heart is with them, and with all who have family, friends, and loved ones in Ukraine. 🇺🇦 pic.twitter.com/prLgqBB83W

David Harris, C.E.O. of the American Jewish Committee, pledged support for Ukraine — and countered Putin’s claim that he’s “denazifying” Ukraine. Putin has tried to delegitimize Ukraine’s government by calling it fascist, and saying that he wants to save ethnic Russians in eastern Ukraine from “genocide.”

“Ukraine does not need Russia for denazification,” Harris scoffed, adding that Ukraine has a “democratically elected Jewish president.” Instead, he said, “Denazification needs to take place right now — in Moscow. What is happening today comes directly out of the playbook of Hitler in 1938 and ’39. Those who know what the word ‘genocide’ means, and those Ukrainians who remember the Holodomor [the Soviet ‘forced famine’ in Ukraine of the 1930s], remember what real genocide is — and not these phony claims.”

Bozena Kaminski, the national vice president of the Polish American Congress, warned of the ripple effect that Putin’s brazen invasion could have on Europe.

“We fear that this attack on Ukraine will destabilize the entire region and create a great humanitarian crisis,” she said. “It is a continuation of the aggressive action that [Russia] started against Georgia in 2008, against Ukraine in 2014. … This is not acceptable. This is not a revolution. This is invasion. This is killing.”

Those who don’t live near Russia can’t appreciate the fear felt by those who do, she said, describing Putin as like an evil Sauron-type figure out of Tolkien.

“It’s very hard to understand who Putin is if you live on another continent,” she said. “Those who live near him know his fear on their back. … That he created a hit list is despicable.”

The Russian leader has reportedly drawn up a list of Ukrainians to be killed or sent to internment camps, including dissidents and journalists.

Echoing Holubov, she said a determined Ukraine will fight back.

“Young men, young women are all raising arms,” she said. “People in their 60s, 70s who have never had guns in their hands are training.”

The government is forcing all men between ages 18 and 60 to fight.

Ronya Lozynskyj, representing the Ukrainian American Women’s Association, said the U.S. and allies should give “air cover” to the embattled nation.

“There needs to be an iron shield over Ukraine,” she declared.

Speaking for indigenous Ukrainians was Ayla Bakkalli, a representative of the American Association of Crimean Tatars. She said Russia’s occupation of Crimea, which began in 2014, “has been very difficult” for Crimean Tatars, about 300,000 of whom still live in Ukraine. Fifty thousand of them, though, now live in Romania.

“The indigenous people are with Ukraine,” she said. “Like the rabbi elders have said for 1,000 years, ‘Next year in Jerusalem.’ And similarly we say, ‘Next time in Crimea and Ukraine.’”

Mariarose Pawlyk, a first-generation American who works for the Ukrainian American Youth Association (CYM), was volunteering at Thursday’s event. A former resident of the East Village’s Little Ukraine, she said she was “priced out” and now lives in Brooklyn. She still has family in the neighborhood, though, and visits every weekend to see them and for cultural activities, her son’s sports and church.

“We really try to keep our community going,” she said, “even if we can’t live here.”

Her aunt in Ukraine lives right next to a military base that was just bombed, so Pawlyk expects they may soon come to live with her.

“They’re trying to get out,” she said. “They have two infants.”

She’s very concerned about Russia having captured the former Chernobyl nuclear power plant, which, she noted, is a top tourist attraction in normal times.

“As a former chemistry teacher, that’s very worrying,” she said of the toxic reactor falling into enemy hands.

Holubov, the consul general, agreed. He told The Village Sun that one frightening scenario is that Putin could use the contaminated power plant as a “dirty bomb” to threaten the rest of the continent.

“The wind will move the radioactive cloud to Europe,” he explained. “At least it’s a threat.”

It’s not far-fetched to think it’s a threat Putin would make, he said, because threats are Putin’s specialty.