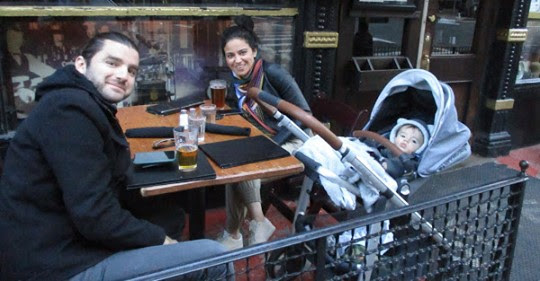 Fearless or foolhardy? A young family outside Pete's Tavern in Gramercy on Sunday, the day before the mayor and governor shut down the bars and restaurants. (Photo by Mary Reinholz)

In Gramercy, bars, restaurants were already reeling before shutdown

BY MARY REINHOLZ | Days before Mayor de Blasio ordered a shutdown of city bars and restaurants except for take-out and delivery, service employees and managers were already preparing for the grim scenario in Gramercy Park.

“Attendance declined by about 70 percent since last week,” said Fayed, a manager at Friend of a Farmer, at 77 Irving Place, on Sunday afternoon.

As he spoke, he eyed several patrons seated outdoors where a couple had recently been seen smooching without regard for the 6 feet of “social distancing” recommended to combat COVID-19. “We are planning to close temporarily,” he said.

Sure enough, the farm-to-table eatery posted a sign saying just that a few hours later, noting hopefully, “See you soon.”

Across the street, a waiter at the legendary Pete’s Tavern, on E. 18th St. and Irving Place, bemoaned the lack of customers for food and drink around 1 p.m. Sunday.

“There isn’t a single customer inside,” he told The Village Sun during a stroll outside. “It’s like a ghost town,” he continued.

That image often describes how life in New York has turned upside down since de Blasio and Cuomo have issued executive orders sharply limiting crowds in an effort to slow the spread of the deadly virus.

According to reports, the hospitality industry has taken a major hit comparable to losses suffered in the aftermath of 9/11 and Superstorm Sandy.

Business picked up at Pete’s throughout Sunday and this reporter photographed locals munching on burgers and drinking.

One Gramercy couple sat outside drinking ale while their infant sat placidly in a stroller “getting an airing.” All three seemed oblivious to the dangers posed by the worldwide pandemic.

But Monday was different. Restaurant and bar employees knew they would be out of work by 8 p.m. tonight, when Governor Cuomo’s temporary ban on restaurants and bars except for take-out and delivery went into effect. (De Blasio’s deadline had been for tomorrow at 9 a.m.)

Several said they had no idea whether the city would step in to help them financially through the crisis.

“I had a feeling this was going to happen,” cracked the aforementioned waiter. “Guess I’ll have to move in with my girlfriend.”

“It’s really nobody’s fault,” observed the bartender, who has been at Pete’s for seven years and doesn’t know what he’ll do for cash during the closure. He seemed resigned but insisted, “I won’t be driving cab” to make ends meet.

Nancy, a woman of a certain age who’s been a regular at Pete’s Tavern for years, said she was worried about a “major financial crisis” for employees and owners with the closing of restaurants and bars, even though they can still offer take-out and delivery.

Monday night she and her friend would have a last supper of sorts at Pete’s until the crisis ends.

“We always have dinner there every Monday night,” she said. “Pete’s is like our neighborhood dining room.”

There were few customers Monday at Sunburst, a cozy espresso bar on Third Ave. between E. 18th and 19th Sts. Owner Oleg Volkov, 45, who has operated the eatery since 1993, said business had been poor for at least a week.

Even take-out had been practically nonexistent because, he said, “patrons are worried that the food” might be contaminated.

He said his place was basically closed. Apparently, few of his staff of about 20 remain.

“The city is going to have challenges in the next two and three weeks,” Volkov said, adding he was hardly alone. “This is going to be a hit for everyone.”