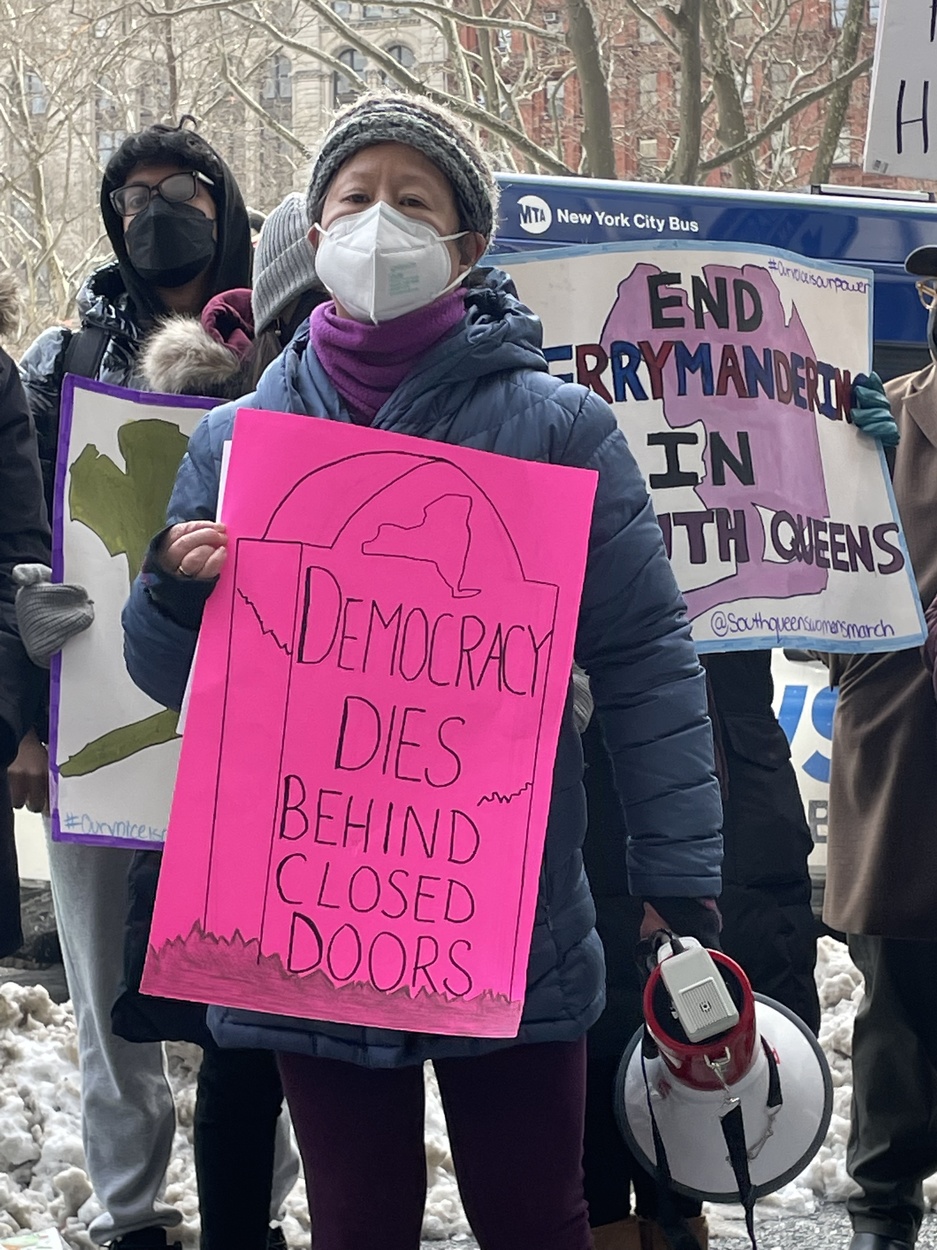 BY DASHIELL ALLEN | With only one day to go before a final vote by the state Legislature, the proposed congressional district maps for New York State are finally public. If approved, these maps will bring dramatic changes to Downtown and Lower Manhattan for the next 10 years.

Asian-American advocates have big concerns over the new districting lines, charging that they split up communities and that the public is being shut out entirely of the crucial decision-making process.

The maps were drawn by the New York State Legislative Task Force on Demographic Research and Reapportionment (LATFOR), a small committee made up of only one assemblymember and two state senators, after the Assembly and Senate voted down four separate proposals presented by the New York State Independent Redistricting Commission (NYIRC) earlier this month.

NYIRC was created following a 2014 ballot referendum in a bid to create a fair and independent redistricting process.

Leaders in New York City’s Asian-American communities, represented by the organization APA Voice, saw the new process, which involved public hearings, as an opportunity to create and maintain majority-Asian districts in Manhattan, Brooklyn and Queens.

Alongside a coalition of 60 organizations, they proposed an alternative “Unity Map” that they say prioritizes keeping immigrant communities intact across the five boroughs.

In Lower Manhattan their demand was simple: Keep Chinatown and the Lower East Side together.

The current plan, however, “splits the Lower East Side and Chinatown,” Mae Lee, executive director of the Chinese Progressive Association, told The Village Sun. “The Chinese community is not all within this little wall,” she said, “it’s actually all over. It’s really one community and there’s no clear division.”

Additionally, APA Voice identified Manhattan’s Chinatown and the majority-Chinese neighborhood of Brooklyn’s Sunset Park as one single “community of interest,” advocating that the two should remain in the same congressional district. The two nabes are currently both represented by Nydia Velázquez.

Now Velázquez’s district might not cover either: Instead she’s slated to represent a larger swath of northern Brooklyn, taking away a portion of Carolyn Maloney’s district in Williamsburg, while expanding her presence in parts of the East Village.

The proposal for the 12th Congressional District, which is currently represented by Maloney, would extend it further into Lower Manhattan, including Soho, much of the West Village and even parts of Tribeca. That could benefit Maloney in facing off against progressive opponents Rana Abdelhamid and Maya Contreras, given that Brooklyn and Queens voters in recent past elections strongly supported one of her opponents, Suraj Patel.

In perhaps the strangest local redistricting of all, a narrowed District 10, currently represented by Jerry Nadler, could snake its way along the West Side — a mere two blocks wide at certain points — before journeying into Chinatown, the Financial District and, in Brooklyn, Sunset Park and Borough Park.

“While I have nothing against Upper West Side people, their needs and their priorities are different,” Lee said. “Many of our schools are Title I schools where there are a lot of lower-income students or students who are eligible for free lunch. So while education is important everywhere, I think on the Upper West Side there aren’t that many Title I students and then the Chinatown part will get lost.”

Lee also pointed to Chinatown’s eligibility for the 9/11 Victims Compensation Fund, arguing, “We were able to get all these benefits because we advocated together, in the same district, to the same representative.”

As for why Chinatown and Sunset Park should be included in the same district, Lee told The Village Sun, “Often you’ll see some business owners here actually live in Sunset Park, or the other way around. If you go to Chatham Square Park Library there’s always kids from Brooklyn there. So you could say that the small business relief here affects the livelihood of residents of Sunset Park.”

The new maps do not keep Chinatown and the Lower East Side together, plus were hastily thrown together without any public input, the APA Voice advocates contend. On a statewide level the maps might create a Democratic supermajority in New York’s Congressional delegation, but they would do that at the cost of separating well-established communities.

On Mon., Jan. 31, less than 24 hours after LATFOR released its proposed maps, APA Voice held what it called an “emergency rally” outside City Hall to demand a public hearing on the issue.

In attendance were activists from as far away as Westchester and Richmond Hill and Ozone Park, Queens.

“Democracy dies behind closed doors,” said Elizabeth R. OuYang, coordinator of APA Voice’s redistricting task force. “Redistricting happens every 10 years. So many of us here today for the past year have been trying to educate our communities about the importance of redistricting. Now at this late stage, when on January 10th New York’s state Legislature rejected two of IRC’s final maps, and they expect to go to a vote this week. This is not an issue of timing, it is an issue of will,” she said.

“Without redistricting being done correctly with transparency and with accountability, it absolutely adversely affects our ability to be represented,” said Xamayla D. Rose, APA Voice’s deputy public advocate for civic and community empowerment.

“We all know that the new maps are going to be litigated,” said John Park, executive director of the MinKwon Center for Community Action. “It’s going to happen across the country — there’s a lot of pressure happening right now. How strong will LATFOR’s case and leadership look when New York’s very own constituents are rallying and testifying against a biased and flawed process?”

Mar Fitzgerald, co-president of the Village Independent Democrats and chairperson of the Community Board 2 Equity Working Group, said that a public hearing would “allow our most impacted residents and business owners to provide vital knowledge about their communities.”

On behalf of C.B. 2 Fitzgerald sent a letter to the members of LATFOR, urging them to hold a hearing.

Michael Li, the redistricting and voting counsel at the progressive think tank Brennan Center for Justice, said on Twitter that the maps are an “aggressive” attempt at partisan gerrymandering.

In response to accusations that the new maps were created in a back room without public input, state Senator and LATFOR member Michael Gianardis told The New York Times, “We did the best we could with a flawed process. This is a very Democratic state, let’s start there,” he added. “It’s not surprising that a fairly drawn map might lead to more Democrats getting elected.”

The proposed new Assembly and state Senate district boundaries, which were released earlier today, keep the Lower East Side and Chinatown together. Although the Assembly proposal lumps Battery Park City and parts of FiDi in with northern Staten Island.