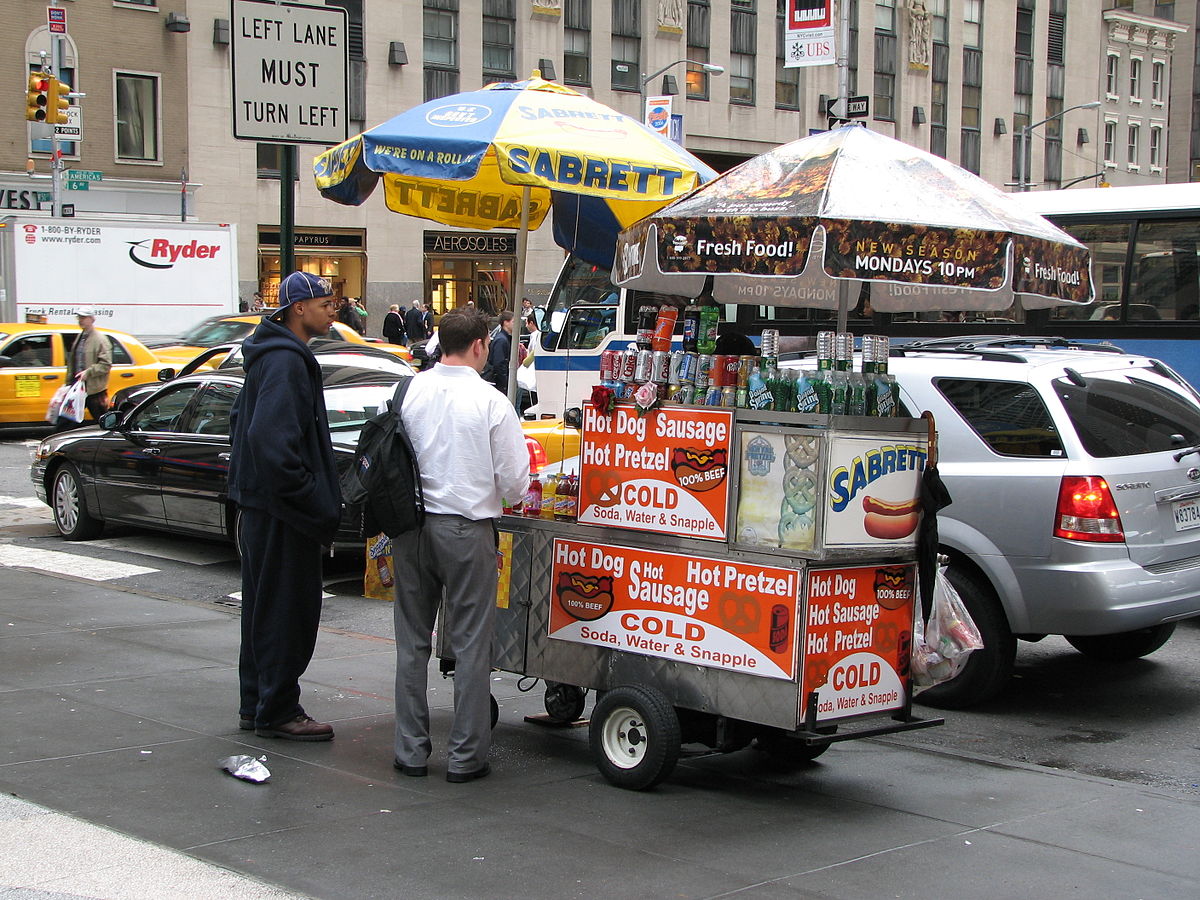 A hot dog vendor on Sixth Ave. in Midtown. (Photo by Totoya)

How to destroy street vending with one new law

BY ROBERT LEDERMAN | Last week, Intro  No. 1116 was passed by the New York City Council.

If you read the numerous news articles rejoicing in the passage of this deceptive scam, you might believe it was intended to help immigrant vendors. Read between the lines and you will see a classic bait and switch.

Let’s pretend a newspaper was actually going to write an objective article on this law. What might the article say:

1. In exchange for making 400 food-cart permits available to food vendors who have already been working illegally and making a good living for decades, the city will create a new vending enforcement agency that will do nothing but summonses and arrest these same vendors. It will be laser-focused on food vendors, the very people this law pretends to be helping find relief from N.Y.P.D. harassment and the financial ruin of the pandemic.

2. The permits will only be available to food vendors who are on the waiting list, in other words, food vendors who have already been working illegally for years or decades. New immigrants will not be able to get these permits for many years, if ever, because there are tens of thousands on that waiting list.

3. The BIDs will get to run a new version of the Street Vendor Review Board, which will be able to make any street they like completely restricted to vending. They will also be able to increase fines, and otherwise invent new vending restrictions and penalties.

4. The thousands of immigrant food vendors now operating illegally (no cart permit, no food handling license, no vending license) will still be 100 percent illegal. They will not be able to vend in subway stations, in crosswalks, on restricted streets, from a shopping cart or in any of the countless ways food vendors presently work.

5. The idea that this bill will give food vendors “financial relief” is absurdly cruel. A legal food vending cart will cost $30,000 to $100,000. If you vend from an illegal cart you will face summonses, confiscation and arrest, exactly as you did under the previous laws. This law will not help food vendors in ANY way shape or form.

5. Due to the huge increase in food vendors competing with struggling restaurants, and the daily conflicts over vending spots that will surely follow, the city will be pressured to create a franchise program, exactly as is in effect in all New York City parks. Only large corporations that can bid for multiple vending spots will be able to compete. The independent vendor will be left in the dust.

6. Finally, this bill was written and pushed through the New York City Council by the Street Vendor Project (SVP), a front group financed, in part, by the New York City Council. Not a single New York City vending advocacy group other than SVP supported this bill. All food carts will now have GPS and other surveillance features so that the city will be able to know exactly where each vendor is at all times. Every action this organization has taken since it began has harmed the entire vending community. In my personal opinion, SVP was started for the specific purpose of doing surveillance of immigrant food vendors, the vast majority of whom are Islamic or Latino.

Understanding how these Democrat elected officials and their front group SVP promoted  such a hugely deceptive bait and switch on the vending community will make you savvy to how virtually all new laws are deceptive tricks, often intended to do the exact opposite of what they claim to be doing. Also note that this bill was 100 percent passed by liberal Democrat officials, virtually all of whom are puppets of the BIDs. They are literally wolves in sheep’s clothing.