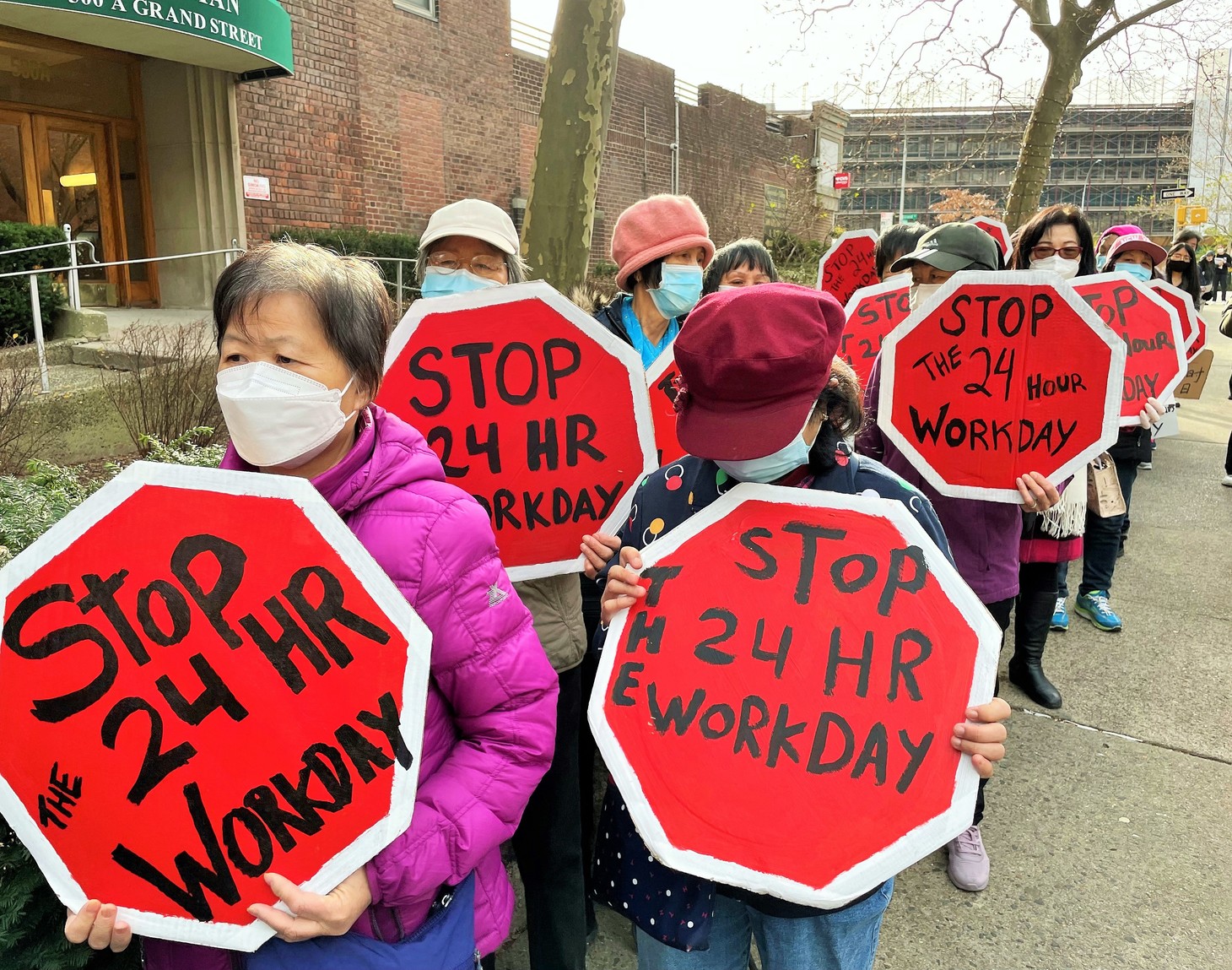 Healthcare workers turned out in force at a rally on Grand Street in December. (Photo by Dashiell Allen)

Homecare workers win $30 million settlement — but get just $250 each

BY DASHIELL ALLEN | Grassroots organizers fighting to end the 24-hour workday for home attendants are unhappy with a settlement last month between New York’s healthcare union and 42 homecare agencies that amounts to “less than 0.5%” of the backpay workers are owed.

On Feb. 25, an arbitrator between the large union 1199SEIU and homecare agencies, including the Chinese-American Planning Council, announced a “historic” $30 million settlement covering roughly 120,000 workers who are owed stolen wages — amounting to a meager $250 per worker.

The agencies allegedly owe 24-hour workers — many of whom are immigrant women — unpaid wages for working more than the legal number of hours per shift.

Under New York State law, homecare workers are required to work for a maximum of 13 hours per day, with eight hours set aside for sleeping — five of which must be uninterrupted — and the rest for breaks throughout the day. This is rarely if ever the case, however, according to workers and organizers with the Ain’t I A Woman? campaign, given that most patients require around-the-clock attention.

According to the press realease by 1199SEIU, “Arbitrator Martin F. Scheinman found employer violations of wage and hour laws and has ordered the creation of a $30 million Special Wage Fund, to be fully funded by the employers.”

“1199 is proud of this historic Special Wage Fund and looks forward to its distribution to so many of our members,” said Rona Shapiro, executive vice president of the 1199SEIU Home Care Division.

“I am glad to be an 1199 member and work at an 1199 agency where I have a collective bargaining agreement and disputes can be resolved between workers and employers,” said Francisco A. Javier Castillo, an 1199SEIU homecare worker.

In a statement, however, the Ain’t I A Woman? campaign said the union makes history only “in belittling women of color…with less than 0.5% of the wages they are owed.”

“After 7 years of delay, this settlement will award workers, predominantly immigrant women of color, just $250 each, amounting to less than 2 days of backpay for 24-hour shifts,” the Lower East Side-based group said. “Yet this settlement is meant to redress 8 years of grueling 24-hour shifts that have inflicted permanent mental and physical health damages on workers. Despite its branding, the settlement signals a shameful historic low for women and for the labor movement.”

According to the Ain’t I A Woman campaign, “Chinese-American Planning Council (CPC) alone owes its workers $90 million in stolen wages. For example, Lai Yee Chan is owed $247,000 by CPC for 6 years of 24-hour workdays.

“It is disappointing to see that, with its reputation for racial equality, 1199 is helping sweatshops like CPC evade labor laws and maintain a racist and sexist system,” the campaign said.

Wayne Ho, the C.E.O. of CPC, said the Chinese-American Planning Council Home Attendant Program is “committed to doing right” for the workers.

In response to a request by journalist Dan Moritz-Rabson for comment on the arbitration settlement, Ho said, “Of the more than 100,000 homecare workers unionized by 1199SEIU and participating in this process, about 5 percent are former or current CPCHAP workers. As a union organization, we respect 1199SEIU as the advocate for our homecare workers and acknowledge 1199SEIU’s grievance process to address worker concerns.

“We are committed to doing right by our homecare workers,” Ho continued. “We will comment further about the way forward after a review of the arbitration decision and award. We will also continue to advocate for systemic reforms, including passing Fair Pay for Home Care to raise wages and passing the Epstein/Persaud bill to end 24-hour shifts, in order to build a more just and caring economy for both longterm care recipients and those who serve them.”

CPC has in the past denied accusations that it broke any homecare laws, stating “CPCHAP has no choice but to provide homecare by following New York State Medicaid rules and requirements, as well as Department of Labor laws, court decisions and union agreements.”

The union’s settlement is historic in that it forces agencies like CPC to acknowledge, for the first time, that they broke state labor laws.

In a statement on the arbitration, Assemblymember Ron Kim said, “We feel vindicated, in that the arbitrator agrees that the employers, not the state, broke the law and are responsible for these back wages. However, where we demonstrably disagree is in the redress of the settlement. The only thing ‘historic’ here is how insulting this is to the workers.

“I will continue to call for a full accounting of all back wages,” Kim said, “in addition to a thorough investigation of how my constituents accumulated the owed wages in the first place.”

In January Kim’s office released a report that detailed CPC’s alleged violation of state labor laws, plus showed how the forced arbitration process led home attendants to settle for significantly less back pay than they might have otherwise.

Last month the Downtown Independent Democrats club passed a resolution calling for “Justice for Home-Care Workers,” demanding an immediate end to 24-hour shifts, as well as backpay and overtime funds.

“In NYC, most home attendants working 24-hour shifts are immigrant women of color, especially from China, Latin America and Africa,” the resolution reads. “24-hour shifts have debilitating physical effects, such as chronic insomnia, physical disabilities, chronic pain, loss of time with loved ones, depression and other mental health struggles, weakened physical health and susceptibility to other illnesses like COVID-19.”

D.I.D. is calling for a “moratorium on CPC funding until worker demands are met.” The resolution also supports “an investigation by the Attorney General into CPC and other homecare agencies that require 24-hour work shifts.”

Current legislation in the state Legislature would split 24-hour shifts into 12-hour ones, require higher minimum pay for homecare workers and protect workers from stolen wages.

Correction: Due to an editing error, this article’s headline initially said the amount of the settlement was $300 million. It was $30 million.