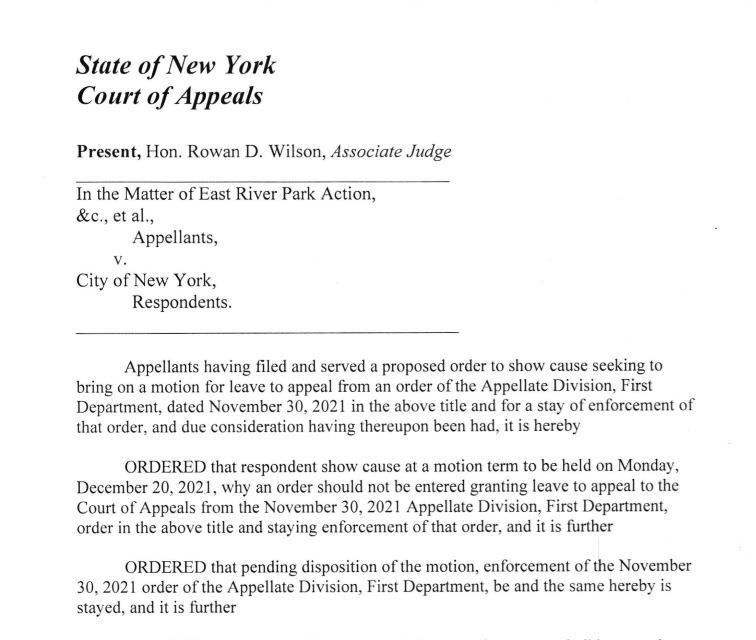 A Court of Appeals judge on Wednesday issued an order stopping the coastal-resiliency project in East River Park.

BY LINCOLN ANDERSON | Stop the chainsaws!

On Wednesday morning, opponents fighting the East Side Coastal Resiliency project cheered as their attorney obtained a stay blocking further work on the contentious project.

The day before, though, park activists had watched in horror as workers either cut or “dismembered” 13 trees in East River Park, felling some completely while shearing the branches off others, leaving them ghostly, ruined trunks.

Early Wednesday morning, the workers were right back at it, lopping the branches off of six-more adult trees, a combination of London planes and locust trees, that the Parks Department has likely earmarked to be made into planks for park benches.

But around 9:30 a.m., Judge Rowan D. Wilson of the state’s highest court, the Court of Appeals, granted a stay on the lifting of a restraining order against the work by the Appellate Division, First Department, from Nov. 30, when the lower court had ruled against a community lawsuit against the project.

Attorney Arthur Schwartz won the stay, which will remain in effect as Judge Rowan now considers the opponents’ appeal on the Appellate Division’s recent ruling on the case.

“Everyone understands that it stops work in the park,” Schwartz said of Rowan’s order. “This will definitely outlast Bill de Blasio. He only gets to cut down a few trees. We will be asking for all fences to come down and for the bike path and park south of Houston Street to be reopened ASAP. I’ll be very happy to see the bike path reopened. I hope Transportation Alternatives will celebrate along with the rest of the park-loving neighbors.”

On Wednesday at 10 a.m., Schwartz alerted the city’s Law Department that the judge had issued the stay and that the city should now alert the contractors working on the East Side Coastal Resiliency project to stop immediately.

However, former City Council candidate Allie Ryan reported that despite the stay being issued, hard hats were initially still revving their chainsaws in the newly fenced-off construction area.

She said the police arrived in three cars.

Ryan said that, before the cops showed up, though, two park activists, Harriet Hirshorn and Emily Johnson, plus another attorney on the case, Jonathan Lefkowitz, managed to scramble over the chain-link fence and confront the workers — even as one of the chainsaw-wielding hard hats was up in a cherry picker still slashing and gashing limbs off of one of the venerable 80-year-old trees.

Lefkowitz showed the hard hats the digital copy of the judge’s order while the activists also brandished a printout of the order at them.

“I had to physically go inside to stop them from cutting a tree,” Johnson confirmed.

Sarah Wellington said “park defenders” will now be maintaining an “East River Park watch” Monday through Friday from 7 a.m. to 3 p.m. “to observe, document and defend the park.”

“We are asking neighbors to join us anytime during those hours in the park, usually near the Houston Street entrance,” she said, adding that people can follow @1000treesnyc on Twitter for more information.

The three police cars left. But around 12:30 p.m., as Ryan was leaving the park, she reported that another police car was arriving at the scene.

Judge Rowan set a court date of Mon., Dec. 20, to hear the lawsuit appeal. The suit argues that the E.S.C.R. project is illegal since the state Legislature never held a required “alienation” vote to allow East River Park to be taken out of use as a public park for a “nonpark use” for an extended period of time.

The lawsuit argues that E.S.C.R. — which the city estimates will take at least five years but opponents assure will drag on much longer — is primarily a floodwall project to protect the surrounding community from storm surges like Sandy and only secondarily a park-improvement project. The de Blasio administration has staunchly resisted calls to allow the state Legislature to hold an alienation vote — and have oversight — on the first-of-its-kind resiliency megaproject.

The judge’s stay will remain in effect pending the outcome of the appeal.

Schwartz told The Village Sun that the stay could last from “two to 10 months, depending on the schedule the courts set…and whether there will be a larger appeal.”

“We can’t get those 19 trees back,” Schwartz said. “But one good thing is [the stay] gets it out of the hands of de Blasio and gives it to Adams.”

The attorney said de Blasio clearly has been hell-bent on starting the project and getting it underway, so that incoming mayor Eric Adams would be less inclined to try to stop it — “just like Soho/Noho,” he noted, referring to the mayor’s embattled, 11th-hour rezoning plan that is coming down to the wire for a City Council vote.

Schwartz said a goal now that the stay has been issued is also to get the city to remove the fences that it has put up blocking off the park’s southern end.

In addition, there are two other lawsuits currently lodged against E.S.C.R. One of them, also brought by Schwartz, argues that the $1.45 billion megaproject fails to meet city, state and federal requirements for Minority and Women Owned Business Enterprises (MWBE) hiring.

The other suit, by Tully, a contractor, contends that the city improperly awarded the contract for the East River Park work to an ad-hoc entity, IPC, that was cobbled together for the project and does not have the required amount of experience for the job.