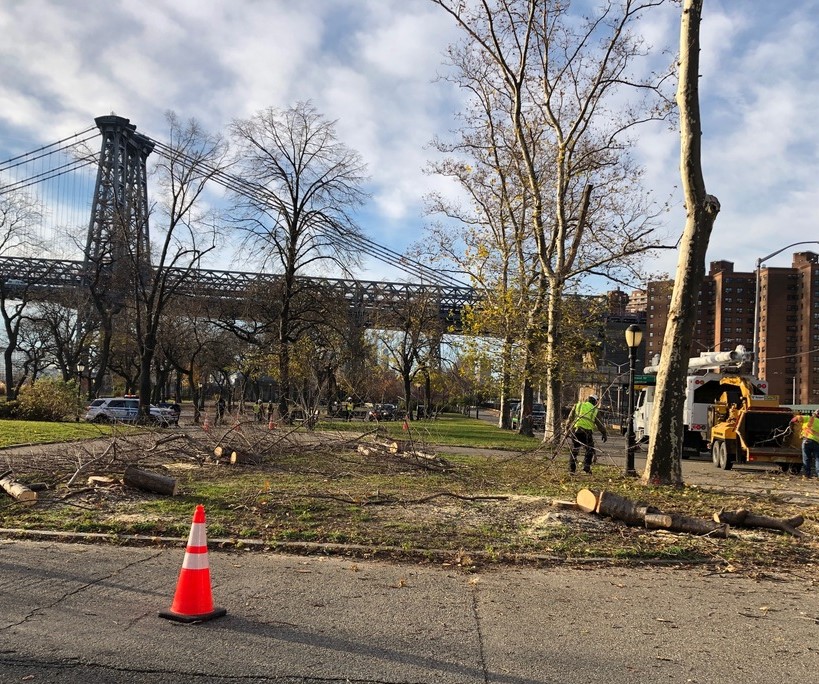 Workers were already cutting down trees in East River Park on Mon., Tues., Dec. 7, the day after the city closed off the park's southern half. (Photo by Allie Ryan via Twitter)

BY THE VILLAGE SUN | Workers wasted no time in chainsawing trees one day after the city closed off the southern part of East River Park.

Former City Council candidate Allie Ryan was on the scene in the park near Stanton Street, where the new fence is, videoing the arboreal carnage. After the damage had been done for the first day, she gave The Village Sun the grim report.

“It is shocking,” she said. “It’s emotional, especially when you know all these trees were healthy.”

Today we are wailing at the gates of ESCR, DeBlasio’s Death Star. pic.twitter.com/d5sF05YXqk

In a video Ryan posted to Twitter, a group of park activists are seen mournfully wailing by the new gate blocking off the bikeway / walkway at Stanton Street, in front of a wasteland scene of branchless treetrunks rising starkly into the air.

One park activist was so disturbed witnessing the park’s devastation that she suffered a panic attack and needed medical attention, Ryan said.

Of the 13 trees, eight trunks were shorn of their branches but left standing, including five London planes and three locust trees. Five others, smaller cherry trees, were felled, leaving only their stumps.

Ryan said she figured the London plane trees were around 80 years old, among the park’s original and oldest trees, while the locust trees were likely a bit younger, maybe 50 years old.

As for the barren tree trunks stripped of their branches that were still standing at the end of Tuesday, Ryan said she had heard at a public meeting that the plan is to use them to make park benches.

“An 80-year-old tree is as old as my parents,” she reflected, sadly. “When those trees are replanted, I will never see them regrow that tall in my lifetime.”

Also Monday, workers started putting up a green tarp on the inside of the new chain-link fence. As a result, Ryan noted, it will be harder to see the ongoing deforestation on the historic park as it continues.

The park has nearly 1,000 mature trees, all of which are slated to be felled under the East Side Coastal Resiliency project. The plan is for the work to be done in two phases and to take at least five years to complete.

Mayor de Blasio, the city’s Department of Design and Construction and Councilmember Carlina River agree that the drastic “elevated park” plan — where the existing park is destroyed, then buried under up to 10 feet of infill soil — is the best flood-protection option for the surrounding area and the park itself. However, opponents, like Ryan, support the earlier, lower-impact “berms” plan that would not have raised the park.

Meanwhile, Village attorney Arthur Schwartz gave an update on legal efforts to stop the contentious resiliency project. The community lawsuit challenging the project on the grounds that it still needs an “alienation” vote by the state Legislature is being considered by the Court of Appeal in Albany, he said. He is trying to get the court to issue a stay blocking the work.

In addition, on Tuesday Schwartz was in court for another case that argues the coastal-resiliency project does not meet city, state and federal guidelines for Minority and Women Owned Business Enterprises (MWBE) hiring. That hearing was adjourned to Friday.