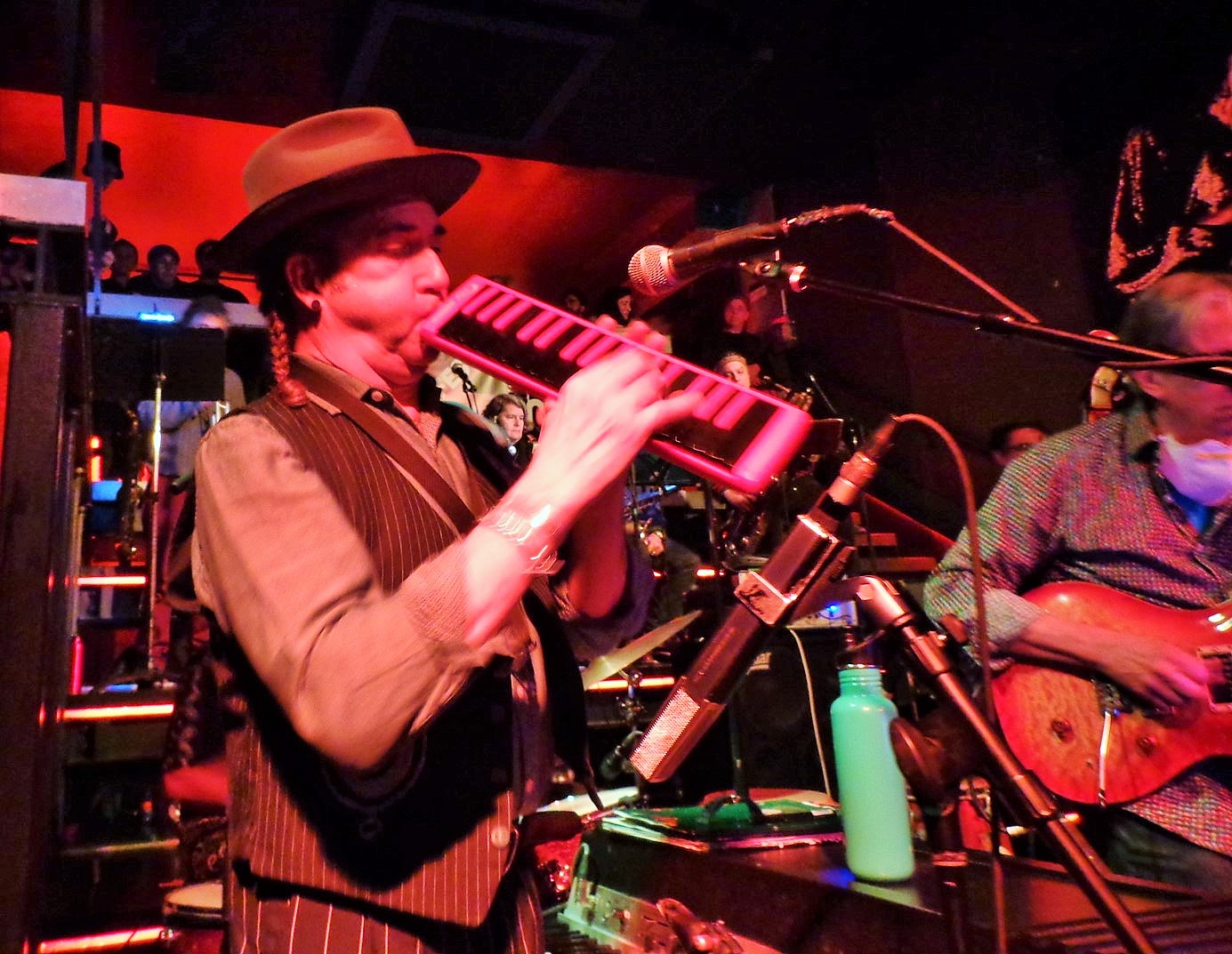 BY NOAH AUGUSTIN | Peter Apfelbaum’s Hieroglyphics are an unorganized group, never having a set roster. They transport their maracas and shakers in paper gift bags and never know how they’re going to get from rehearsal to the show. That’s what’s killing them, but it makes the music good.

The 46-year-old Californian world jazz ensemble reunited for the first time after a six-year break on Oct. 24 to play at the Nublu club’s Jazzfest on Avenue C. On Jan. 16 they played there again, now as part of the New York Winter Jazz Festival.

“Can we hit that again — just better this time,” Apfelbaum told the band as they rehearsed for their October show at trombonist Josh Roseman’s place in Greenpoint, Brooklyn. Seeing Apfelbaum in his element is a sight to behold. He wriggles around the room giving the musicians their rhythm, imitating the sound of their instruments, playing the melody on his black and red melodica.

Everyone was just there to jam and party — it’s not like they’re going to cash in much at the show anyway. It’s jazz, after all. Few play to make money and those who do usually don’t have much of it. Most play because they love to play.

The MLK Day roster was a bit different, with Noah Garabedian on bass, Marcelo Perez on drums and Sana Nagano on violin. Tiga was in Senegal.

It’s a big group, too big for jazz nowadays. Their size makes them a management disaster when it comes to touring, along with Apfelbaum not known for being the most organized group leader. With record deals no longer being much of a thing, the ensemble only has to contend with the occasional session every half a decade or so. This doesn’t tarnish the impact they’ve had on the genre.

Apfelbaum, 62, is a prodigious figure himself. Over his four-decade career, the multi-instrumentalist has worked with all of the top artists in the global music world. He toured with everybody from O.J. Ekemode’s Afrobeat All-Stars to Don Cherry’s Multikulti, recorded with Moroccan Masters of Jajouka, Phish jam-band leader Trey Anastasio, renowned poly-genrist John Zorn and about two dozen more.

Despite all that, Peter Apfelbaum never gained the popularity of the aforementioned musicians. That just goes to show the number of skilled artists who live, die and are forgotten if ever even known.

The atmosphere on MLK Day was bright and the music was freewheeling. Everyone was having a good time. Surprisingly, the Hieroglyphics managed to get an audience of maybe 300 people, mostly young and there to drink and dance to the music. The more common jazz audience today is 100 or so middle-aged or older folk only listening because they’re in the jazz field, each one knowing the other.

Stachel and the Joneses carried the melody on the sax while David Phelps and De Conscini, always smiling, played it out on the guitar. Tiga and Johnston were missed. At October’s show, Jean-Baptiste, who combines Haitian, West and East African, as well as indigenous Australian rhythms, played off of drummer Johnston, nodding his head to smooth doubles.

Marcello Perez, a young member also from Berkeley who took over percussion at the Winter Jazz Fest show, got the love of the crowd with his solo bit on the drum set.

They ended the same way they started, playing a Moroccan song called “Titi Wa,” with Apfelbaum on the melodica.

It was a classic Hieroglyphics performance; it wasn’t new but hasn’t gotten old. Nublu owner Ilhan Ersahin must have enjoyed it since he wants the orchestra as a monthly staple at the club. There’s also talk about a possible Hieroglyphics album with Ersahin’s in-house label, although knowing the band it’s not likely to happen.

Everyone had to get home after the show to rest up for the day jobs that pay the bills. Most, like Apfelbaum, teach. A few have their solo careers or other bands. David Phelps drives a school bus, so he had to get up bright and early the next morning.

Only passion, or obsession as Phelps calls it, keeps Peter Apfelbaum and the Hieroglyphics ever ready for another round.