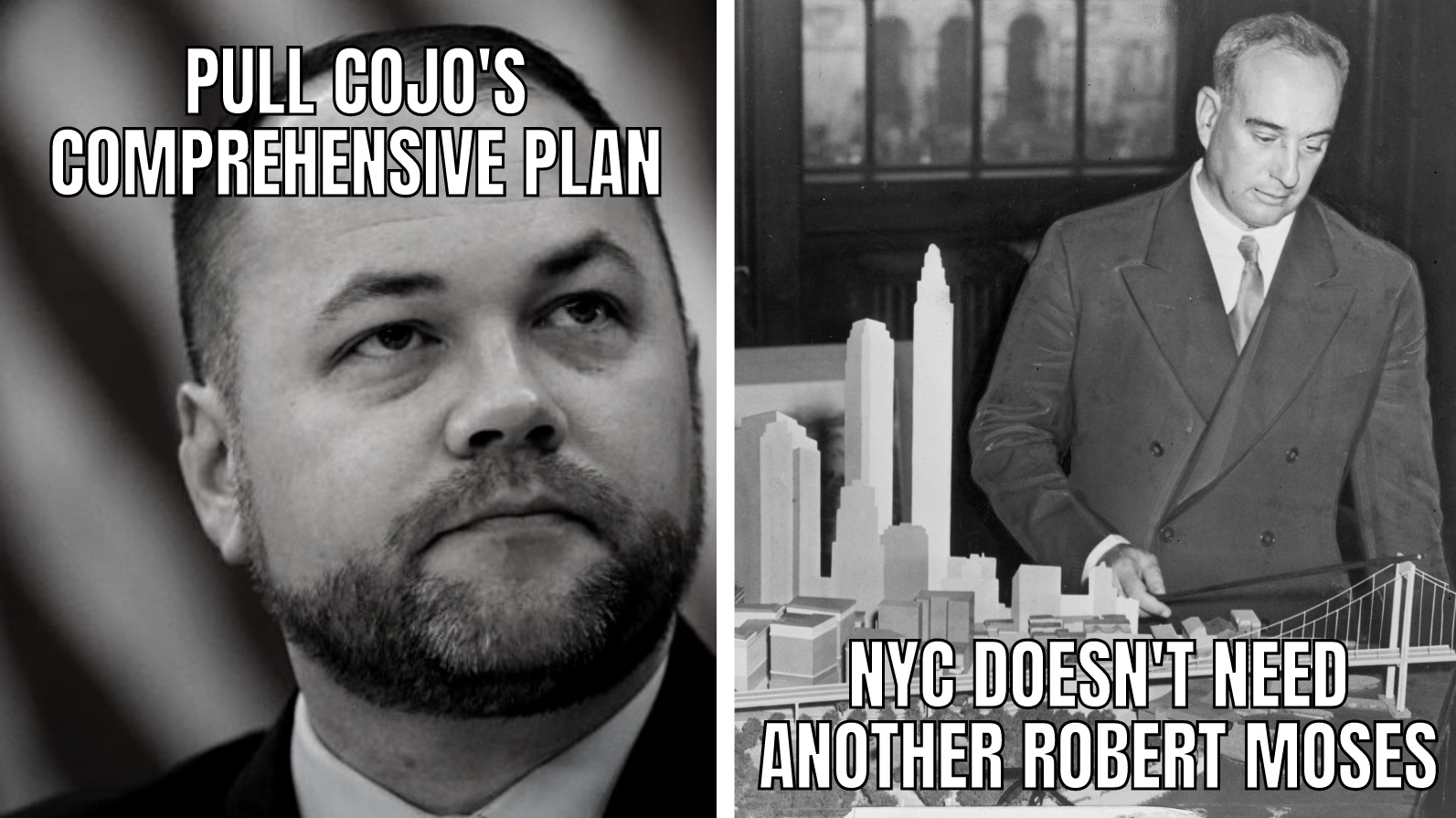 Critics warn that a long-range planning bill being fast-tracked by Council Speaker Corey Johnson, left, would create an unaccountable "planning czar," like Robert Moses, seen in the 1930s with a model of his hoped-for Brooklyn Battery Bridge project, right. Johnson, though, says the bill would empower communities. (Courtesy Citywide People's Land Use Alliance)

Charging that New York doesn’t need a 21st-century version of Robert Moses, community groups from across the city will rally at City Hall on Tues., March 16, at noon, to protest against Council Speaker Corey Johnson’s “comprehensive long-term planning” bill, Intro 2186.

The event is being organized by the Citywide People’s Land Use Alliance.

In December, in a similar action also at City Hall, a diverse collection of community groups rallied to protest Mayor de Blasio’s push for 11th-hour neighborhood upzonings — which speakers slammed as “racist” — in his final year in office.

Johnson, too, is a lame duck legislator who will be term-limited out at the end of this year.

On Dec. 16, Johnson released a sweeping document, “Planning Together: A New Comprehensive Planning Framework for New York City.” The next day, the long-range planning bill was introduced with, according to Community Board 2, “little publicity and no circulation to the public or community boards.”

According to its description on the City Council Web site, the bill “would create a 10-year comprehensive planning cycle connecting budget, land use and strategic planning processes. The cycle would include a review of city conditions, including racial and socioeconomic disparities, access to opportunity, displacement risk, short- and long- term risks, impacts of prior development and budget decisions, and current and projected infrastructure needs. A Citywide Goals Statement would set targets for housing, jobs, open space, resiliency infrastructure, city facilities, schools, transportation, public utilities and other infrastructure.”

As word of the far-reaching bill got out, concern quickly mounted. Community activists Lynn Ellsworth of the Tribeca Trust and Sean Sweeney of the Soho Alliance recently penned outraged op-eds about it in The Village Sun.

A detailed, well-researched press release announcing the March 16 protest has already been prepared but not released yet. One activist, though, shared it with The Village Sun.

“The purpose of this presser is to oppose Corey Johnson’s ‘comprehensive planning’ bill and to call out his lies at his performative hearing on the bill a couple of weeks ago,” an activist who was forwarding around the media advisory explained.

On Feb. 23, the City Council’s Committee on Governmental Operations held a virtual hearing on Johnson’s bill. Opponents were outraged that, four hours after the hearing’s start, when they were finally allowed to speak, Johnson, the bill’s prime sponsor, was no longer on the call and most of the other councilmembers had signed off, too.

Meanwhile, at the hearing, Marisa Lago, the chairperson of the City Planning Commission, accused the bill of being a “top-down” scheme that would only further bloat the city’s bureaucracy.

The bill would create a “director,” which, to hear opponents tell it, would be an all-powerful planning czar, along the lines of the notorious Robert Moses. This director would be charged with establishing a “Citywide Goals Statement” that would outline citywide targets for population growth and other issues.

Three scenarios — but whose call?

Under the bill, three land-use scenarios would be created for each of the city’s 59 community board districts, with an emphasis on population growth. However, Lago contended that this would create an additional cost to the city of at least $500 million.

Next, under the proposal, the director would submit draft comprehensive plans to all the community boards and eventually to the City Council to select one plan for each district. The draft comprehensive plan’s main goal would be to “prioritize population growth, where applicable, in areas that have high access to opportunity and low risk for displacement.”

If, however, the City Council or a particular district’s councilperson were to reject all three of the options, the Moses figure would be able to pick one of the plans for them.

The bill’s text does say the director “shall consider all public feedback in producing the final plan,” though “consider” is a loose term.

Public input — or not?

During the Feb. 23 hearing, Johnson reportedly maintained that communities would have input into the plan because, among other things, the city would consider the annual “district needs assessment” that each community board creates. Yet, the opponents counter that the needs assessments are little more than a “wish list.”

The bill does state that, within 30 days after the release of the preliminary Citywide Goals Statement, which would be done every four years, the director “would hold at least one public meeting in each borough” to solicit input.

One thing that is mandated in the bill, critics charge, is “increased building height limits.”

Community Board 2, like many of the city’s other community boards, was recently blindsided by the existence of the long-range planning initiative. The board, which includes Greenwich Village and Soho, voted overwhelmingly at its February meeting to “strongly recommend” that the City Council delay a vote on the measure “until there has been time for truly extensive outreach to, and dialogue with, community boards and related stakeholders.”

However, C.B. 2 noted in its resolution on the issue, “This bill is now being fast-tracked…to be voted on by the City Council as early as March, with insufficient input at the community-board level.”

Board 2 noted that Johnson’s push to pass the bill so quickly, without community input, “is in stark contrast to the lengthy educational process [that was] undertaken by the 2019 Charter Revision Commission, whose slogan was ‘You Can Vote On That.’

“Adoption of the long-term comprehensive plan as it is now written would result in major changes to the public review process that are not fully understood at this time,” C.B. 2 added. “This would add a completely new layer of bureaucracy to a city that is already facing severe and unprecedented budget constraints. Implementation would require resources — both economic and staff — that community boards do not currently have, in order for them to be able to participate in this complex and lengthy process.”

However, to hear Johnson tell it, C.B. 2, the Citywide People’s Land Use Alliance, Sweeney and Ellsworth all must be reading a different bill — or not reading it right. He said the bill, in fact, would give communities more say in their planning.

In a statement to The Village Sun, Johnson said, “Community boards and neighborhood residents across New York City do not have enough opportunity to plan proactively for what they want to see in their neighborhood, and that is exactly what comprehensive planning attempts to fix.

“Comprehensive planning would empower communities to plan the futures of their own neighborhoods,” he said, “rather than react to individual rezoning requests put forward by developers. I look forward to community board members and all New York City residents learning more about the idea, as comprehensive planning seeks to address the very concerns that they are raising now.”

A City Council spokesperson denied that the bill would create a Robert Moses 2.0. And he said that, in fact, the idea of the bill is to more evenly distribute the excessive planning power that the mayor currently wields.

“The proposal does not create a planning czar,” the spokesperson insisted. “The proposal democratizes the city’s planning process by requiring input from community boards and borough presidents on citywide goals — and Council adoption of those goals.

“The Office of Long-Term Planning and Sustainability (OLTPS) and its director already exist,” the spokesperson explained. “The office currently goes by the name ‘the Mayor’s Office of Sustainability.’ The director of that mayoral office is responsible for putting together the PlaNYC / OneNYC reports. Right now, the mayor and the director of that office have full control over the citywide goals that appear in that plan, in addition to city-sponsored rezoning proposals and agency priorities, without any opportunity for input from the City Council, community boards or borough presidents. The Planning Together proposal infuses new requirements for public participation into the city’s existing planning framework to democratize that plan and the process through which it’s put together.”

“The cost estimate put forward by the mayor is both inaccurate and absurd,” he said. “There is absolutely nothing in this bill that will cost the city $500 million. Based on conversations with planning experts and consultants who have worked on comprehensive plans for other cities — and on planning contracts for New York City, specifically — we estimate the total annual cost would be between $3 million to $4 million. We expect the G.E.I.S. [generic environmental impact statement] for the plan to cost about $2 million to complete. In total, over 10 years, we expect the total cost to be at most, $42 million. … [The city] put forward an inaccurate cost estimate to dissuade our city and City Council from having this critical conversation.”

The Council spokesperson maintained that the cost estimate cited by Lago, in fact, used the G.E.I.S. for Hudson Yards as the baseline, “one of the most expensive and massive development projects in our city’s recent history. … The only way that cost estimate for the production of a G.E.I.S. is even remotely close to accurate is if the city has plans to build a Hudson Yards-like complex and brand-new subway line in all 59 community districts.”

‘No planning by fiat’

In addition, the spokesperson said, it’s inaccurate to say that, if the Council or a given district’s councilperson balked at one of three long-range plan options, the new comprehensive-planning director would be able to impose one of the plans on the district.

“This is 100 percent inaccurate,” he said. “The proposal requires the city to produce three draft scenarios. This is a standard and common best practice in comprehensive planning… . However, community boards, borough presidents, the Long-Term Planning Steering Committee and the Council would have the power and flexibility to entirely reject all three proposals drafted by the city.

“Community boards, borough presidents and the Council itself would be empowered under this proposal to develop land-use scenarios that reflect their priorities and vision for the neighborhood’s future.

“The Council would have final say over what is included in this plan through its responsibility to adopt final land-use scenarios for the city. Under this proposal, the mayor would only be enabled to select preferred scenarios in the very unlikely event that the Council FAILED to adopt the plan. This fail-safe is designed to ensure that this critical, proactive planning process is not stalled in the rare circumstance that the Council failed to act.

“This is in contrast to the system in place right now, in which the mayor has complete control over the city’s citywide goals and neighborhood-wide rezoning proposals,” the spokesperson noted.

‘ULURP would not be usurped’

“Further, the comprehensive plan proposed in this bill would not directly impose any zoning changes at all,” he stressed. “Any future zoning changes would remain subject to the city’s ULURP [Uniform Land Use Review Procedure] process, which would remain entirely intact, including opportunities for community board and borough president review and, ultimately, Council approval.

“In addition,” the Council spokesperson concluded, “it is worth noting that this proposal is supported by the large and diverse coalition (the Thriving Communities Coalition) which has been advocating for a more equitable approach to planning and development for several years and has been the Council’s closest partner in this initiative.”

Representatives of TCC, along with the Right to A Roof Coalition, and environmental justice, transportation and community economic development organizations, all testified in support at the bill at the Feb. 23 hearing, the spokesperson said.