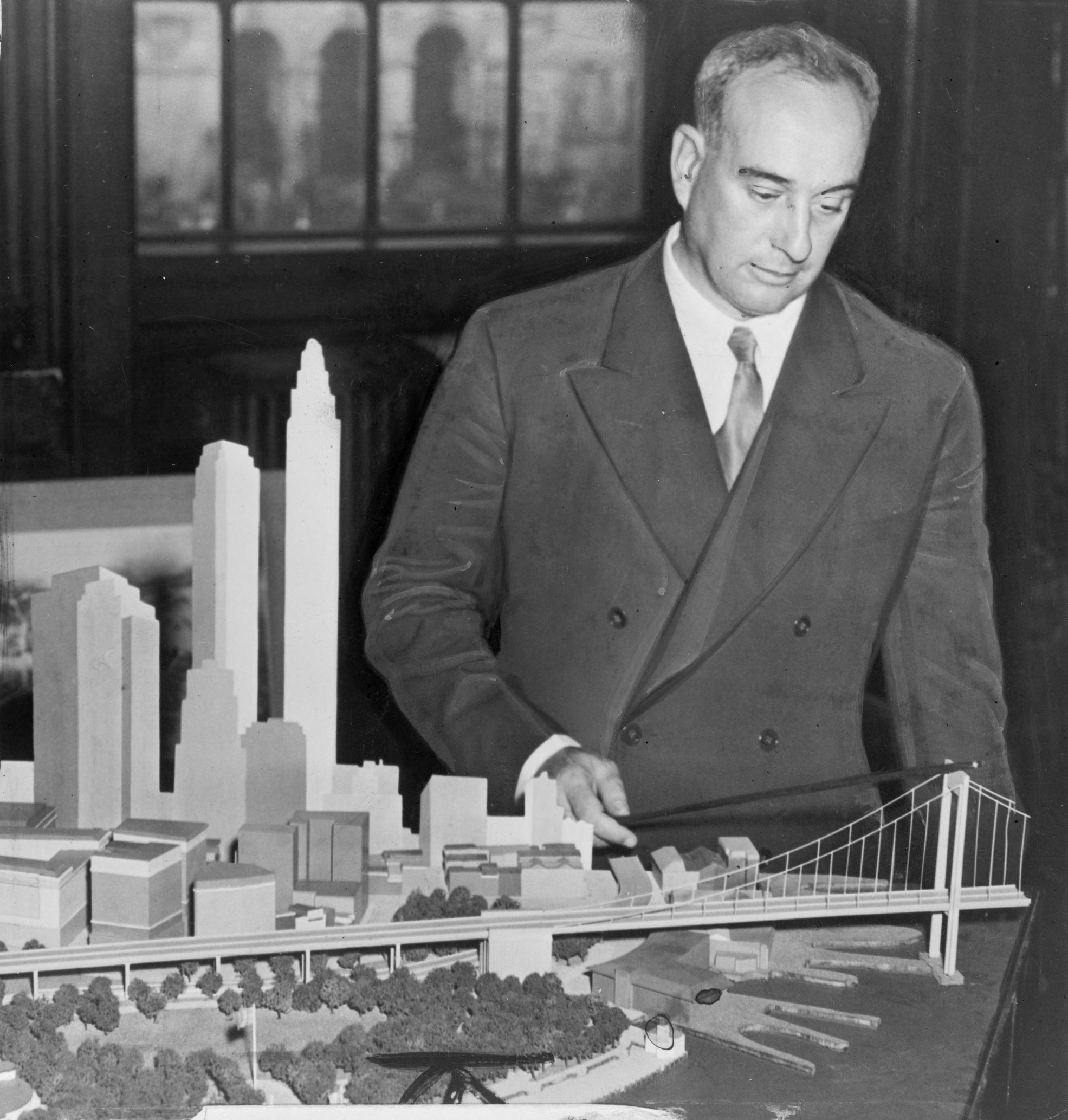 Powerful planning czar Robert Moses with a model of his hoped-for Battery Bridge project in the 1930s. It took an order from President Franklin D. Roosevelt to block the embattled bridge project and get the lower-impact Brooklyn-Battery Tunnel built instead. (C.M. Stieglitz, World Telegram / Library of Congress)

BY SEAN SWEENEY | The City Council has introduced legislation to amend the City Charter to create an expensive, “comprehensive,” long-term land-use plan, supervised by a planning czar not unlike Robert Moses. No small potatoes.

It is a project that needs to be open, fair and transparent. That, unfortunately, has not been the case.

The Council did not widely publicize its own proposal. We only found out about it by chance. Even our local community board was not informed. Why the secrecy?

This past Tuesday, a Council hearing on the proposal continued this pattern of elusive behavior, with many residents precluded from speaking, and, if allowed, relegated to the end of the speakers line.

For starters, the Council set the deadline to register to speak at 10 a.m. the day before the hearing, a full 24 hours cutoff. Before COVID, there was no such cutoff. You show up; you testify. Why is the Council using the pandemic to limit public input on this important topic?

When the public did get to testify, those in favor of the Council’s proposal — mostly those with a vested financial interest in it — were at the head of the speakers line. How convenient.

Those in opposition had to wait hours until the end of the meeting to testify — after most of the councilmembers had left for the day. This cynical tactic denied dozens of citizens the right to directly address their elected representatives.

The meeting lasted six-and-a-half hours. It is a sad commentary that the public could wait all day to be a part of democracy, yet their elected officials chose not to.

However, Mayor de Blasio’s City Planning commissioner, Marissa Lago, did get to speak and she strongly opposed the proposal. One factor was its extreme cost.

The commissioner testified that creating multiple expensive “environmental impact assessments” for each of the city’s 59 community boards, 177 in all, at about $2.5 million a pop, plus staffing, would exceed $500 million. Five hundred million dollars can build a lot of affordable housing.

Manhattan Borough President Gale Brewer also had some doubts about the plan. Nor did a single community board support the legislation. In fact, several have come out against it, including our own local board, Community Board 2.

Why are lame-duck councilmembers implementing a 10-year plan for their successors to deal with? Why the rush to drastically change the City Charter during a pandemic?

It is unclear where this proposal is headed. Considering both the public’s and the de Blasio administration’s strong opposition — and veto power — it may be time for the Council to drop this ill-conceived scheme.