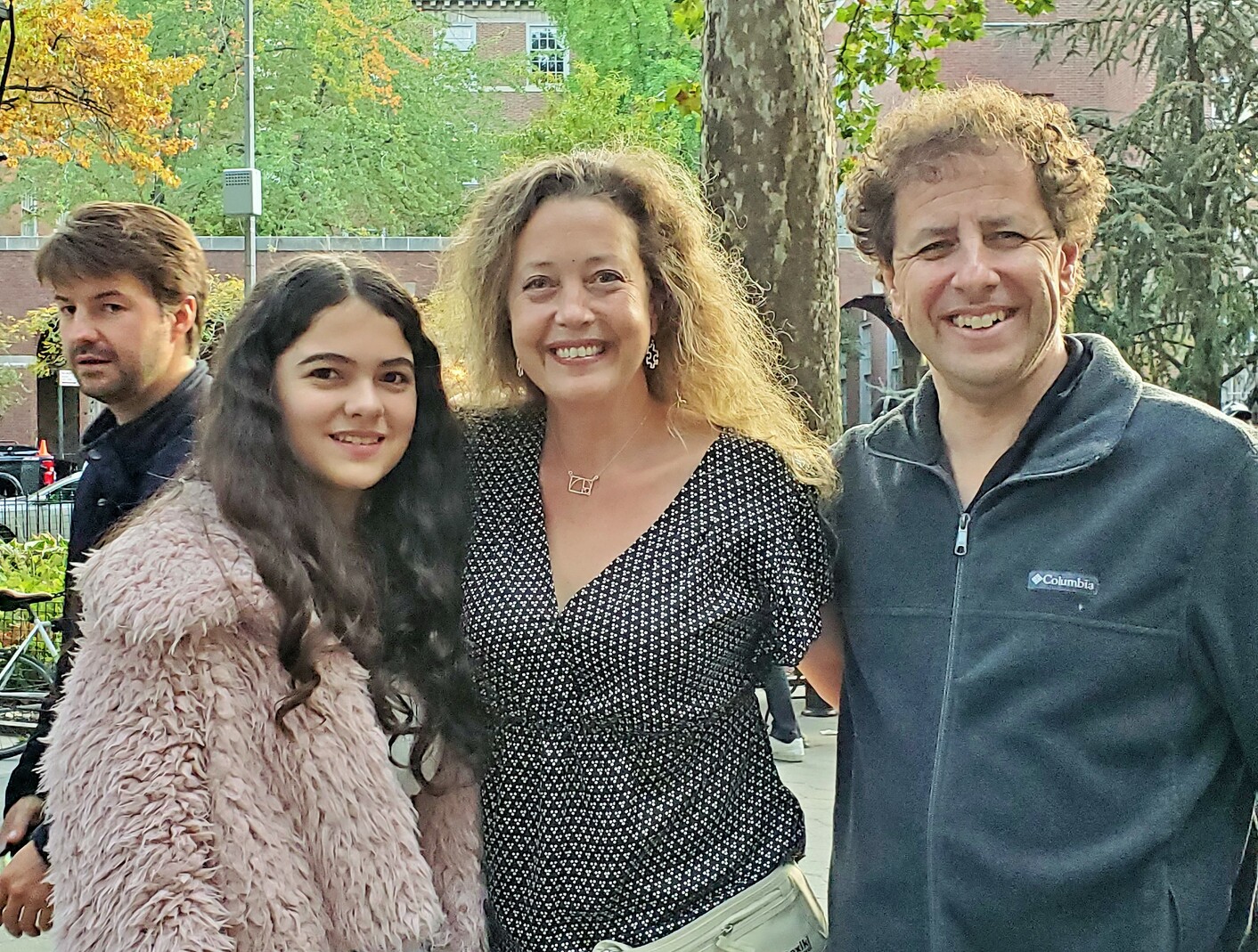 Laura Montanari, 14, left — with Erika Sumner of the Washington Square Association and Ed Feldman of Parks — took the grand master to 54 moves. (Photo by The Village Sun)

Meanwhile, simultaneously playing two-dozen boards at once, whisking from chess table to table, Fedorowicz was able to beat everyone else.

In the final game to wrap up, hours after the simul’s start, Laura Montanari, 14, nearly also won a draw, taking Fedorowicz to 54 moves before conceding. A student at LaGuardia High School of Music & Art and Performing Arts, she lives in Greenwich Village. Hardly a novice, in her native Italy, she was the reigning chess champ for four straight years in her age bracket.

The Washington Square Association and Parks Department co-sponsored the event.

Erika Sumner, a W.S.A. board member, was the organizer. Ed Feldman, the Parks Department’s chief of fiscal management, who, not surprisingly — the math-chess connection, right? — is an aficionado of the game, was also on hand to lend support as a “chess consultant.”

“It was a great experience,” Arias, 37, said of his match versus Fedorowicz.

“Our game was interesting,” he said. “I might have been winning at one point. But I really had to play careful. One blink… .

“I was able to sacrifice the rook on F4. He was trying to play for the draw. I could even play ‘queen G7’ — that was an interesting variation. But I played ‘queen C4.’ We exchanged queens. What a game. When he played ‘E4,’ I knew I could get a Maróczy Bind,” he said, referring to a classic “pawn structure” strategy named for a Hungarian grand master.

“I grew up playing here and learned chess here,” noted Arias, who lives in Harlem and works in finance.

Only watching the games this year was Sarfaraz “Surfi” Ahmed. Last year he was one of the players pushing Dlugy to the limit before having to throw in the towel. Following that showing, Dlugy offered Ahmed a job at his Chess Max Academy on the Upper West Side. Ahmed had previously ditched a longtime, well-paying job to follow his passion, chess, playing in the park for stakes of $5 a game.

“It’s funny how life takes a turn,” he reflected. “One day you’re a chess hustler. The next day you’re a coach for a grand master. Everything in life happens for a reason, I like to say. We are like chess pieces in this world — life is like chess.”

Anthony Kozikowski, who was the other player to draw Dlugy at last year’s simul, also now works at Dlugy’s chess academy, Ahmed said.

After the simul had ended, Johnny O’Leary, a park regular from Staten Island, was sitting at a chess table, waiting for his next opponent. He said he enjoys “the social aspect” of the Washington Square chess scene and especially playing with kids who are learning the game.

“There are no losers at Johnny O’Leary’s table,” he declared. “Because, even if you lose, you win. Because as long as you’re paying attention, you’re learning the game. Because now you’re better than when you lost.”