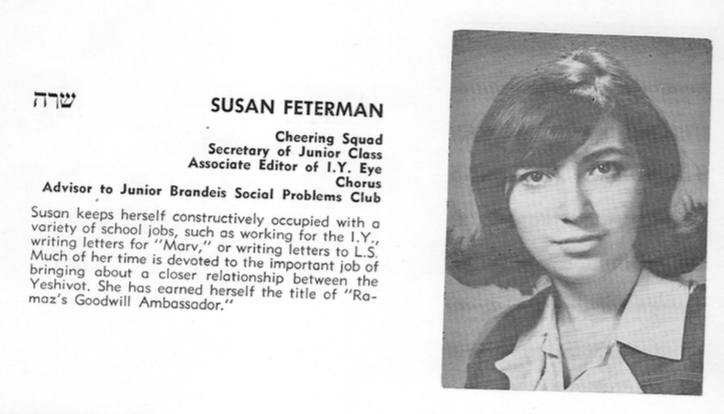 BY LINCOLN ANDERSON | Susan Feterman, the Gramercy woman who was killed while cycling on E. 14th St. in early May, was laid to rest in a proper burial on Staten Island on Sun., June 28.

Getting her there, though, took the combined efforts of a loyal high school friend, a cousin and the Hebrew Free Burial Association, plus an assist from The Village Sun.

Feterman, 72, who lived at Second Ave. and E. 19th St., was known for bicycling everywhere on her ancient and heavy green bike.

As a maintenance man at her building recalled, “She never walked. I’ve been here 20 years, I never saw her without the bike.”

On May 5, Feterman was pedaling across E. 14th St. near First Ave. when she was fatally struck by an SUV reversing into a parking space.

Police tried but were unable to find any family members to notify of her death, which, per department policy, they require before releasing the deceased’s name publicly. It turned out she simply was a private person.

The Village Sun, however, was able to learn Feterman’s name and address from the editor of Streetsblog, who somehow had been able to get the information from the police.

The paper then contacted a friend on Feterman’s Facebook page, Rise Landsman, a classmate of hers in the 1960s at Ramaz High School, where they were both scholarship students. Meanwhile, a second cousin, Linda Haftel Taylor, posted a comment on The Village Sun’s article about Feterman, leaving an e-mail address.

Landsman, a retired social worker, wanted to make sure Feterman had a dignified burial. But she was worried her friend’s body — unclaimed by family members — had already been put into a mass unmarked grave in potter’s field on Hart Island.

Contacting the Office of the Chief Medical Examiner, Landsman learned that the agency was, in fact, still holding Feterman’s body in the morgue.

Their next step was to reach out to H.F.B.A., which readily agreed to handle the logistics of getting Feterman’s body released from the M.E. and handling the burial at its Mount Richmond Cemetery, on Staten Island.

The service was small, including Landsman and her husband, Taylor, another Ramaz high school friend and H.F.B.A. members.

Landsman’s husband, Dan R. Landsman, who is a rabbi, officiated at the burial, which was a traditional service.

Amy Koplow, executive director of H.F.B.A., said it was only due to coronavirus that Feterman didn’t wind up on Hart Island, which would have then required a disinterment.

“She’s lucky she didn’t end up in potter’s field,” she said. “At the beginning of COVID, they were only holding people [in the morgue] six days. Funeral directors jumped up and down, so they increased their storage capacity. She was being held longer due to the pandemic.”

Feterman’s body was held by the M.E. for nearly two months.

Following Jewish tradition, she was buried in a plain pine coffin, wearing a pure white cotton or linen shroud.

The association covered the burial’s $5,400 cost. At this point, it’s not known if Feterman had any assets.

The Hebrew Free Burial Association, headquartered at Maiden Lane in Lower Manhattan, has been around since 1888. It covers the five boroughs and the metro area. In a normal year, the organization typically does 350 to 400 burials per year.

“Because of COVID, we’ve already done 330 this year,” Koplow noted. “Our numbers have doubled.”

Asked if most of the recent burials have been of older individuals, who are at greater risk from COVID, she said, “We’ve had some people in their 30s, mostly middle-aged and older.”

The increase has, understandably, stretched the group’s budget.

Landsman plans on doing a fundraiser for the association among Feterman’s Ramaz classmates.

She gave H.F.B.A. a five-star review.

“I never imagined,” she said, “when I contacted Hebrew Free Burial Association, that every aspect of giving Susan a dignified burial would be handled so compassionately, so respectfully, so thoroughly, so professionally.”

Said Koplow, “We just want to make sure that every Jew gets a respectful Jewish burial.”