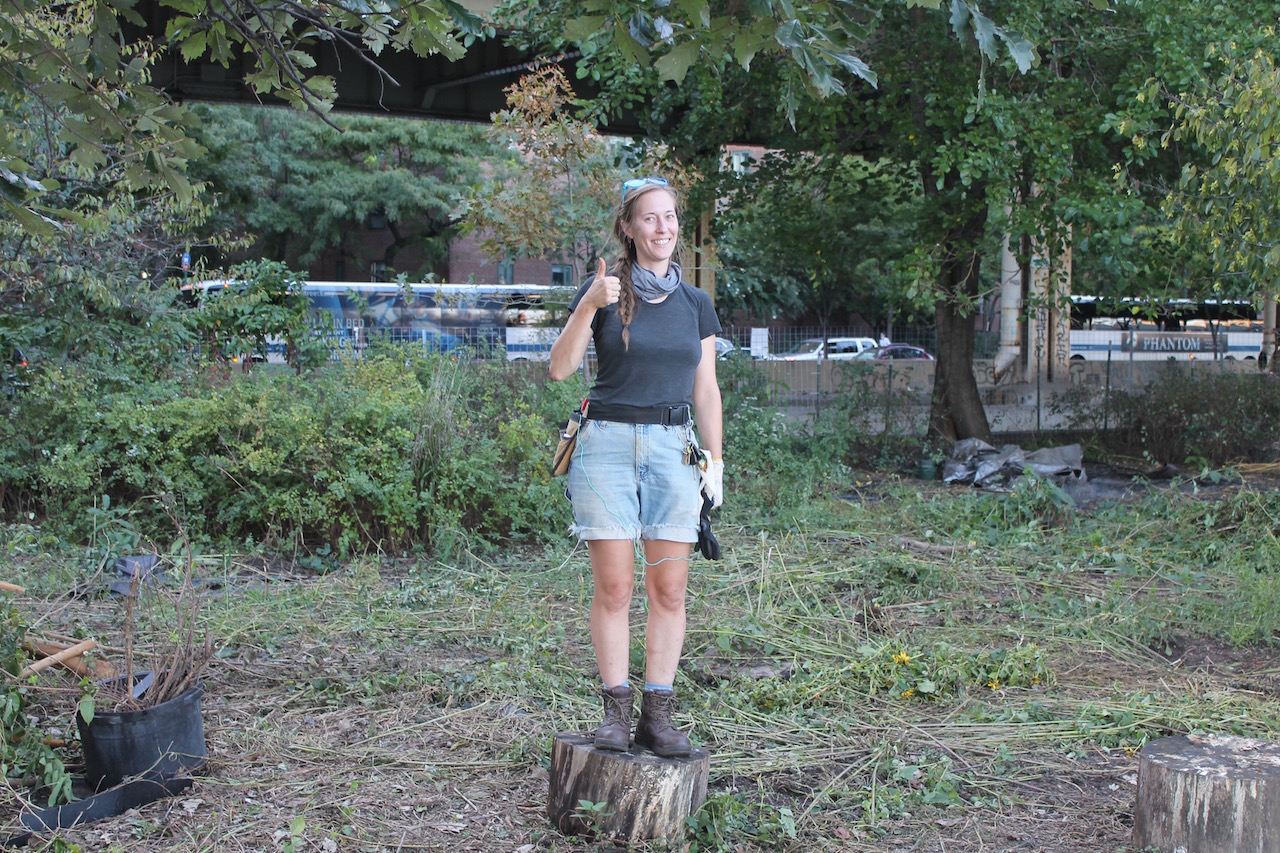 Candace Thompson, the Stuy Cove Park manager, gave the thumbs up Friday after the goat squad lived up to their billing and clearcut the park's weeds. (Photo by The Village Sun)

BY THE VILLAGE SUN | Operation Goat got it done.

Three days of nonstop chowing down at Stuyvesant Cove Park by a herd of hungry Upstate goats totally cleared the jungle of overgrown weeds out of the place’s native-food forest.

Late Friday afternoon, Candace Thompson, the manager of the riverfront park near Stuyvesant Town, was rounding up stray branches here and there, but the goatscaping clearly had been a success. In fact, it looked like a tsunami had torn through the place.

The goats seem to consume more when they have more company. Although Thompson had started out with 20 of them on Tuesday morning, she cut their numbers down to 10, after which those still left didn’t eat as voraciously. Then when the rain set in on Thursday, the natural weed whackers lost their appetite even more, so she sent them home a day early. For no extra charge, though, they left behind a healthy supply of weed-neutralized fertilizer.

Thompson said another reason she cut the eating machines loose early was because she wanted to save some weeding work for volunteers who were scheduled to be helping out. Along with the herd’s goatscaping, volunteers chopped down a few mulberry trees, which the garden had too many of, in Thompson’s opinion.

Eventually, she’ll plant some winter wheat, which hopefully will help keep the pesky bindweed that the goats obliterated from growing back. After that, Thompson will put in things like tomatoes, potatoes and corn to create a native-food garden that can be used to teach kids.

As for all the compostable biomass — weed and tree debris, plus, yes, the goat poop — that the “weed technicians” left behind, Thompson plans to use it to create a hugelkultur, or large mound of decaying matter, in which she’ll plant things like berries.

Meanwhile, the four-legged gardening pros from Green Goats of Rhinebeck have already hoofed it to their next gig, Heckscher Park, on Long Island.