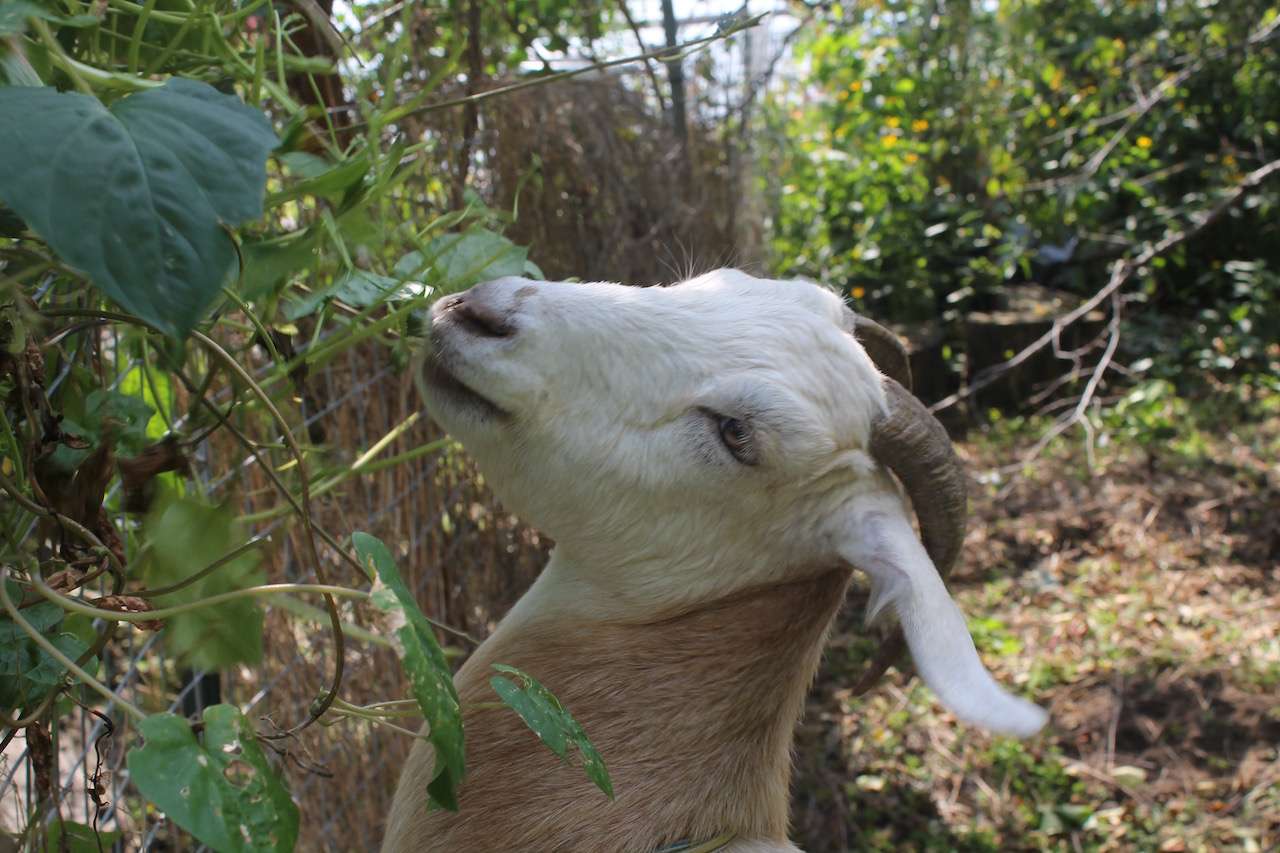 It's an all-you-can-eat buffet of weeds and leaves for the goats at Stuyvesant Cove Park. (Photo by The Village Sun)

BY THE VILLAGE SUN | They really got their goats.

An hour after the animals’ arrival, at 10 a.m., a crowd of smiling onlookers had already gathered around the fenced-in enclosure and were snapping photos.

Candace Thompson, the manager of the park, located east of the F.D.R. Drive between 18th and 23rd Sts., got the idea of going with goats to control the park’s overgrown weeds. During the pandemic lockdown, the small park’s native-food forest had been completely overwhelmed with bindweed.

But, actually, she got the idea first from someone else. On her second day back at the park as things were starting to open up again in June, Thompson was struggling to yank out the pesky plants. A healthcare worker on a break sitting nearby told her, “You need goats.” The woman explained that in her native Jamaica, they use goats for that kind of heavy-duty weeding.

Thompson connected with Green Goats of Rhinebeck, one of the area’s premier “goatscaping” companies.

She had some initial pushback, though, from her bosses, who were shocked to learn that the manager was planning to bring in “not three — 20 goats.”

And so, the “weapons of grass destruction,” as they have been called, arrived at Stuy Cove and began consuming. They’ll be there for around four days.

Thompson plans to sleep on site overnight in a van to ensure the munch bunch stays safe.

On Tuesday, some of the bigger goats were also eating leaves on mulberry and hackberry trees and Thompson said that’s fine. The park doesn’t need that many mulberry trees, she said, adding that the hackberry trees are putting up a lot of extra shoots on the ground all around them.

The goats will even eat poison ivy and thorns.

Basically, the animals seemed to be eating everything in sight. They vacuum in 25 percent of their weight in plants each day.

“There are some jobs, goats are just better — and they’re just cute,” Thompson said, contentedly, watching the Upstate chew crew.

At one point, the group of goats stopped eating and just stood around all gazing off in the same direction. Thompson explained that they were digesting. The goats have a complex digestive system involving four stomach chambers, and also “chew their cud,” meaning they regurgitate some of the plant matter and give it another round of chewing.

A few times the animals startled and ran off when vehicles banged over metal plates on the F.D.R. overhead or a loud motorcycle roared by.

At another point, a bigger goat lightly head-butted a smaller one, in what was either a friendly gesture or a dominance move, or maybe a bit of both.

In what has been a real downer of a year, the goats are a feel-good story, Thompson said. However, it’s advised that people not actually touch or pet them because they could have poison ivy oil on their fur.

People are welcome to sponsor a goat, though. It costs Solar One, the park’s nonprofit operator, $200 per goat to have them here. Through the park’s “Goat Fund Me,” for as little as a $5 donation, you can get a photo of your sponsored goat.

Ann and Larry Cihanek, the co-owners of Green Goats, and their son Jordan drove the herd to Stuy Cove in a trailer. The animals had just completed a job up in Connecticut.

The Cihaneks have been in the goatscaping business for 15 years and today have 180 goats. Demand is high.

“We have more business than we have goats,” Ann Cihanek noted.

She explained that all their goats are donated and that the males have been neutered. Both male and female goats have horns, though often they are removed if they are milk goats or for other reasons.

“People buy a cute little goat and it gets big,” she said, of why people donate goats to them. “Every goat comes with a story. People cry when they donate them to us.”

She knows all the goats by name.

This particular group’s leaders — and best buddies — are Skittles and Cheech. They’re two large males with big curved horns.  They always hang out together.

Then there’s Buckles, who had lived on a chain in West Virginia. Chalupa is another large billy who had his horns removed.

“Chalupa was the star of Riverside Park,” Cihanek noted.

However, the walking weed whackers are not returning to Riverside Park this year because they were so wildly popular it became a crowd-control issue.

The herd at Stuy Cove is about 50/50 males to females. There are many different breeds represented among them. For example, the tiny ones are not babies but actually pygmy goats.

As Cihanek and Thompson explained, goats are also very effective at getting rid of persistent weeds, like bindweed. Because the goats keep eating the weeds each time they try to regrow, they ultimately kill the plant by starving it of the needed nutrients. That kind of permanent weed-zapping happens on larger jobs, like Riverside Park, where the goats will be posted for several months at a time, Cihanek said.

“This is just a cleaning job,” Cihanek said of the four-day Stuy Cove visit.

She assured that the goats should be fine in the park, noting, “We never had anyone harm our goats. Most of our jobs are in urban areas. We never lost a goat.”

As she was talking, Skittles came over to the fence and standing on his hind legs, starting leisurely chomping on some leaves as people snapped photos of him.

“He’s used to the camera,” Cihanek quipped. “Can you tell?”