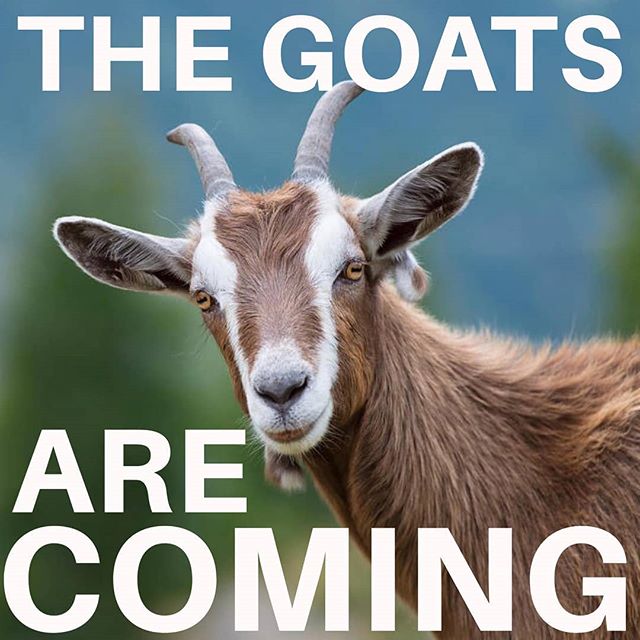 Help is on the way for Stuyvesant Cove Park, which is in a bind from a bindweed explosion.

Solar One, the environmental nonprofit that manages Stuyvesant Cove Park, on the East River between 18th and 23rd Sts., is bringing in some help of the nonhuman kind to help fight weeds. Actually, to eat them.

Starting Tues., Sept. 8, 20 goats from Green Goats of Rhinebeck will be chowing down inside a fenced off area of “Stuy Cove,” a 2-acre native-food forest across the F.D.R. Drive from Stuyvesant Town and Peter Cooper Village.

During their tenure, the goats will be charged with one simple task: Devour everything in sight. Solar One hopes this will assist park staff in minimizing excessive plant biomass while also fertilizing the soil for next season, all in just a few short days.

New York City’s parks are proving to be yet another unwitting victim of the pandemic crisis. Short staffing, budget cuts and reduced volunteer opportunities have left many of the Big Apple’s green spaces to their own devices, and the weeds have been having a literal hay day. Compounding the issue is the fact that as New York residents have turned to parks as safe outlets for socialization and recreation, they have also, sadly, left excessive trash and trampled plantings in their wake.

“It’s just a lot for our two person team to handle,” said Candace Thompson, the manager of Stuyvesant Cove Park. “Mother Nature really got the jump on us with the weeds this spring and I feel like we’ll never catch up on top of everything else.”

While goats may seem an unorthodox fix to a weed problem, foraging animals have long been used in sustainable agricultural practices to manage overabundant species. With their four-compartment stomachs, goats can digest the toughest city weeds around.

Green Goats, in particular, has been lending its services to public spaces and institutions across the greater New York area for more than 15 years.

“When Larry and I first started our goatscaping company, my family back home in Guyana all teased me,” said Annilita Cihanek, co-owner of Green Goats of Rhinebeck. “Now we work full time on contracts for city, state and national parks, we travel constantly, and get lots of press. Let me tell you, my family isn’t laughing any more!”

Over the past three decades goatscaping has become increasingly popular as an herbicide-free way to manage invasive species. Goats have been used for weed control both on Chinese tea plantations and in California forests for brush control and wildfire prevention. Now they’ll be taking a stab (or nibble, as it were) at Stuy Cove’s bindweed problem.

People can sign up to volunteer, support Stuy Cove’s GOAT FUND ME or follow along with these walking weed-eaters from home via the park’s Instagram. With remote and in-person education starting the same week in New York City, students and teachers alike can visit the park’s “Goat Cam” to check the animals’ gustatory progress, or take a Zoom break and watch sustainable land stewardship in action.