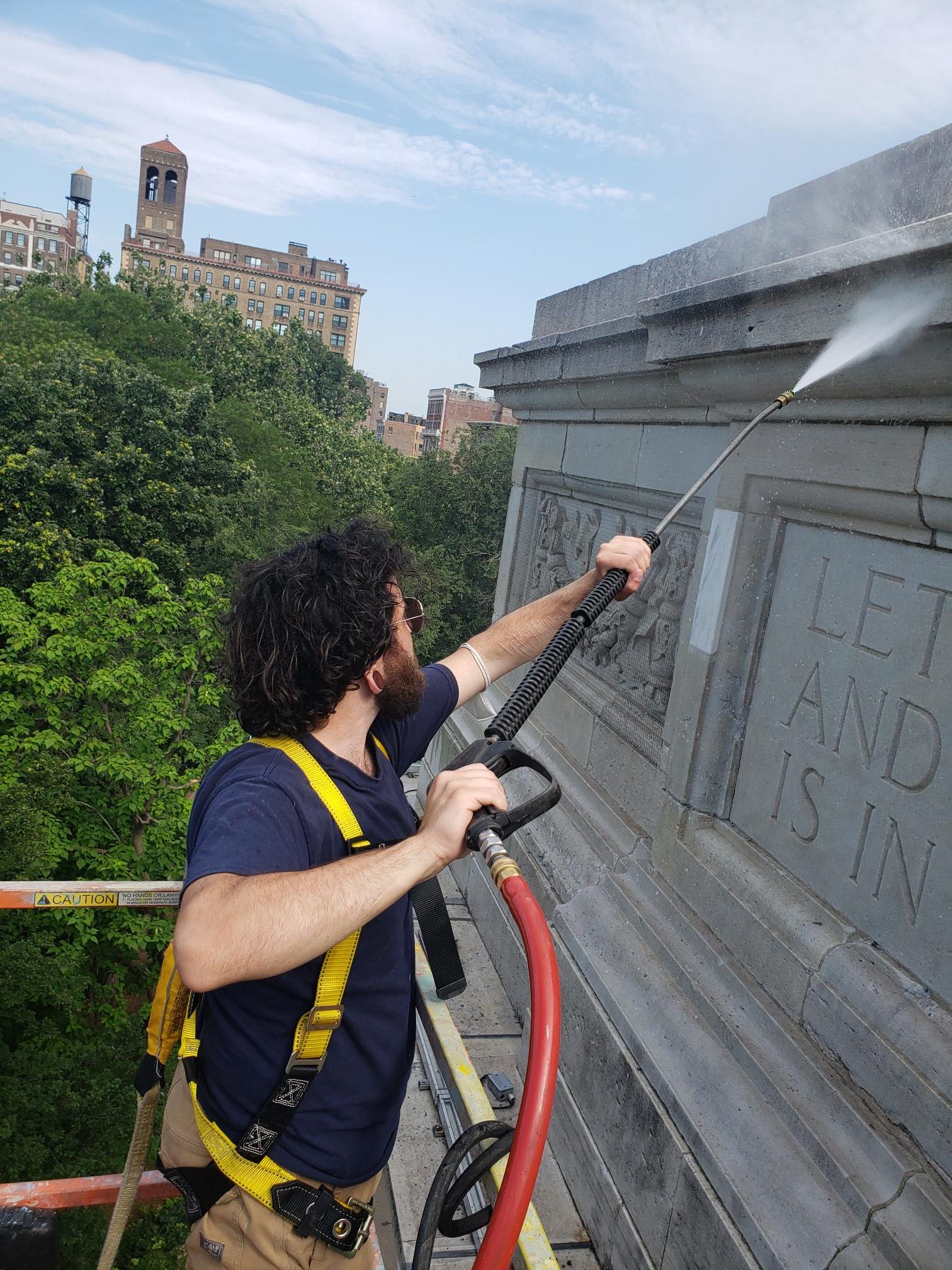 BY THE VILLAGE SUN | It’s a monumental job — but someone, thankfully, had to do it.

The Washington Square Arch recently got its annual cleaning and conservation — including the zapping of pesky “ghost” graffiti. The painstaking work was done by a mix of budding, young trainees and experienced Parks Department staffers.

The arch tenders were on site from July 11 to July 29.

The work was done under the auspices of the department’s Citywide Monuments Conservation Program, a conservation and training program for young people seeking to enter the profession, who often have some prior college or graduate level conservation education and are seeking hands-on experience.

The work included surveying the arch to ensure the structural stability of all marble masonry, decorative ornamentation and sculptural stonework; gently cleaning the entire monument of biological growth and pollutants; conducting masonry repairs and mortar replacement at the parapet; stabilizing the sculptures through chemical stone consolidation; applying a graffiti barrier to the lower portion of the arch; and working with an outside contractor, BirdMaster, to install an improved, roof-level bird-proofing system.

Built in 1895, the majestic arch was designed by architect Stanford White. An international symbol of New York City and Greenwich Village, it’s a central gathering place for New Yorkers and tourists alike — and, since the advent of the smart phone, the backdrop of countless selfies.

The arch was restored in 2003, and the recent preservation work is part of Parks’ ongoing stewardship of it. To keep the monument looking good and standing strong, Parks now gives it an annual, “head to toe” inspection and cleaning.

This year, the effort was especially intensive, also including bird-proofing. Bird droppings had led to plants — including London plane saplings and phragmite reeds — sprouting in cracks and on ledges on the arch. These spots were cleaned and then sealed to keep the arch waterproof, since water penetration can cause the stones to shift and destabilize the structure.

The arch is made of several marbles from two no-longer-extant New York quarries (Tuckahoe for the structure and ornament, Dover for the two sculptures of Washington as Commander in Chief and President, added during World War I), and the stonework is susceptible to acid rain.

The recent conservation included intensive work on the structure’s upper cornice — cutting out failing mortar and repointing many of the joints between the stone blocks.

On the arch’s lower region, the conservators used a state-of-the-art micro-abrasive, with a talc-like consistency, to remove stubborn “ghost” graffiti that had seeped into the porous stone, leaving a faint but still-visible trace even after a previous, basic cleaning. The arch has seen an uptick in graffiti in recent years.

Finally, three coats of an anti-graffiti barrier were brushed onto the arch’s pillars, with the Washington Square Park Conservancy paying the $2,500 cost of the substance.

As for the George Washington sculptures, they were reconsolidated using chemicals that bond and strengthen the granular structure of the marble and help inhibit moisture penetration.

On Tuesday, replacement pigeon-proof netting will be installed from the arch’s upper cornice to the roofline. Also park masons are reinstalling replacement granite bollards for those hit several years ago by cars.

While they’re at it in Washington Square Park, the team has been doing additional preservation treatments on the Garibaldi and Holley sculptures (cleaning and renewing the wax coating on the bronzes) and on the World War I flagstaff (cleaning and doing stone consolidation).