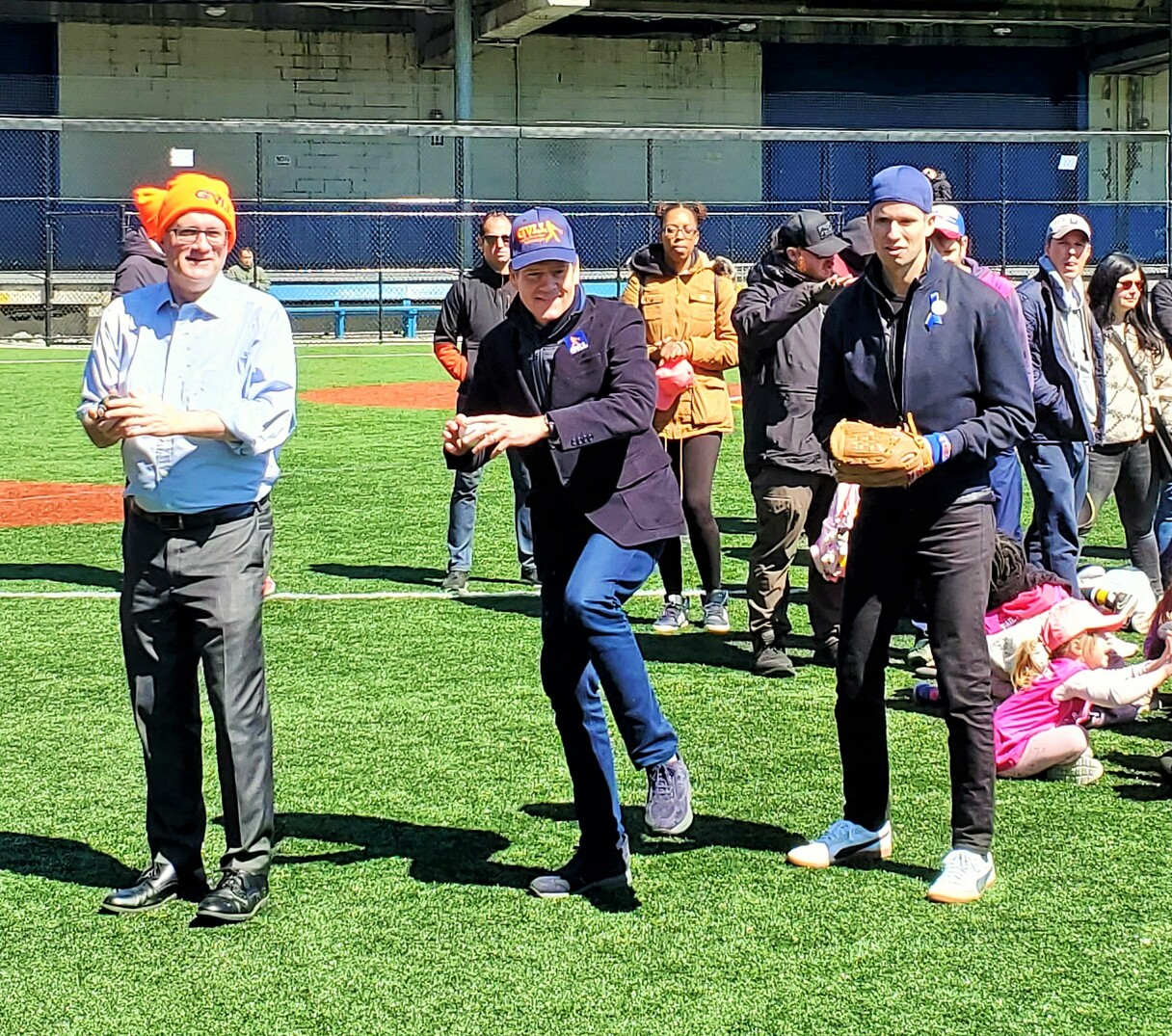 From left, state Senators Brian Kavanagh and Brad Hoylman and Councilmember Erik Bottcher each threw out an opening pitch for G.V.L.L. on Pier 40 on April 2. (Photo by The Village Sun)

BY LINCOLN ANDERSON | The Greenwich Village Little League is back in full swing.

On Sat., April 2, on the sunny expanse of Pier 40, the league held its first full-scale opening day event since the start of the pandemic.

Young players, from T-balling tykes to 12-year-olds, festively marched onto the sprawling, green-turfed courtyard field at W. Houston Street, proudly toting team banners. The national anthem was sung. Speeches were made, including by Congressmember Jerrold Nadler. Representatives for the players and coaches read pledges of good sportsmanship.

More than 700 kids are registered with the league, though not every one of them showed up for the celebration on April 2. Still, more than 1,000 kids and parents did attend, according to league officials.

G.V.L.L. had a season in 2021, but due to ongoing health concerns over COVID, there was no opening-day parade at Pier 40. However, every teams’ first game did have an opening ceremony.

The year before, in 2020, the league only had a summer season, and the players and coaches all had to wear face masks. Also, social distancing was taken to great lengths that season: Only 100 people at a time were allowed on the massive Pier 40 courtyard field, which is large enough to fit Yankee Stadium.

This year, the night before opening day, in what has become an annual tradition, two G.V.L.L. teams played their first game of the season at nearby J.J. Walker ball field, at Hudson and Clarkson Streets, in honor of Carlo Saldana. A legendary team manager and league board member for 25 years, Saldana died a year and a half ago at age 63 just before the pandemic. (G.V.L.L. board members shared their fond memories of Saldana in a piece in The Village Sun in December 2020.)

“He managed up till the day he died,” Carin Ehrenberg, G.V.L.L. president emeritus, told The Village Sun after the Pier 40 opening ceremonies.

Saldana’s son Roscoe was on hand to toss out the first pitch at the Carlo Saldana game on April 1.

Saldana’s absence is still deeply felt by the league on many levels. One of the most obvious frustratingly stares players right in the face ever time they are at J.J. Walker field — the broken scoreboard. The Parks Department is obviously taking forever to fix it. But Saldana, who was an electrician, would have had the scoreboard working in no time, league leaders assured. He might not have gotten official permisison to do so, but Saldana surely would have just climbed up and done the repairs as a “guerilla operation,” they said.

In addition, every year from now on, members of the Angels team will sport “CARLO’S KIDS” on the back of their jerseys.

“If you were ‘Carlo’s kid,’ you were a ringer,” explained Wayne Kimbell, the G.V.L.L. board’s player advocate.

At the same time, he and others noted, Saldana would also give special attention to players who needed a bit of extra help to improve their skills.

League officials had wanted to rename J.J. Walker field for Saldana but Parks had already given that honor to a former department employee. The larger park itself is still called J.J. Walker.

“I’ve thought of a temporary sign. We could put it up at games and then take it down,” G.V.L.L. President Peter Marino said. “Carlo was sort of the father of that field.”

Kimbell recalled how it used to be a dirt field, not covered in artificial turf like today, and that, after it rained, Saldana would be out there early in the mornings with 50-pound bags of “drying agent” to get it in shape for games.

Now, in a Plan B, the G.V.L.L. board is thinking of pushing for a street outside the park to be co-named Carlo Saldana Way.

Showing their committment to the league, a number of leading board members have stayed involved as board members and advisers, even though their kids have “aged out” of G.V.L.L. For example, Kimbell’s son, Eli, is currently a right-handed relief pitcher for the University of Richmond Spiders baseball team after having also pitched at Princeton. Wayne proudly pulled up his sweatshirt to show a Spiders team shirt underneath.

After the opening day festivities, some teams remained on the Pier 40 field for games. Elsewhere on the pier parents practiced hitting, throwing and catching with their young kids.

In an annual rite of spring, a dad tossed a pop-up to his child, then coached him — “Get under it… Settle… There you go…” — as the ball descended, landing securely in the pocket of his mitt.