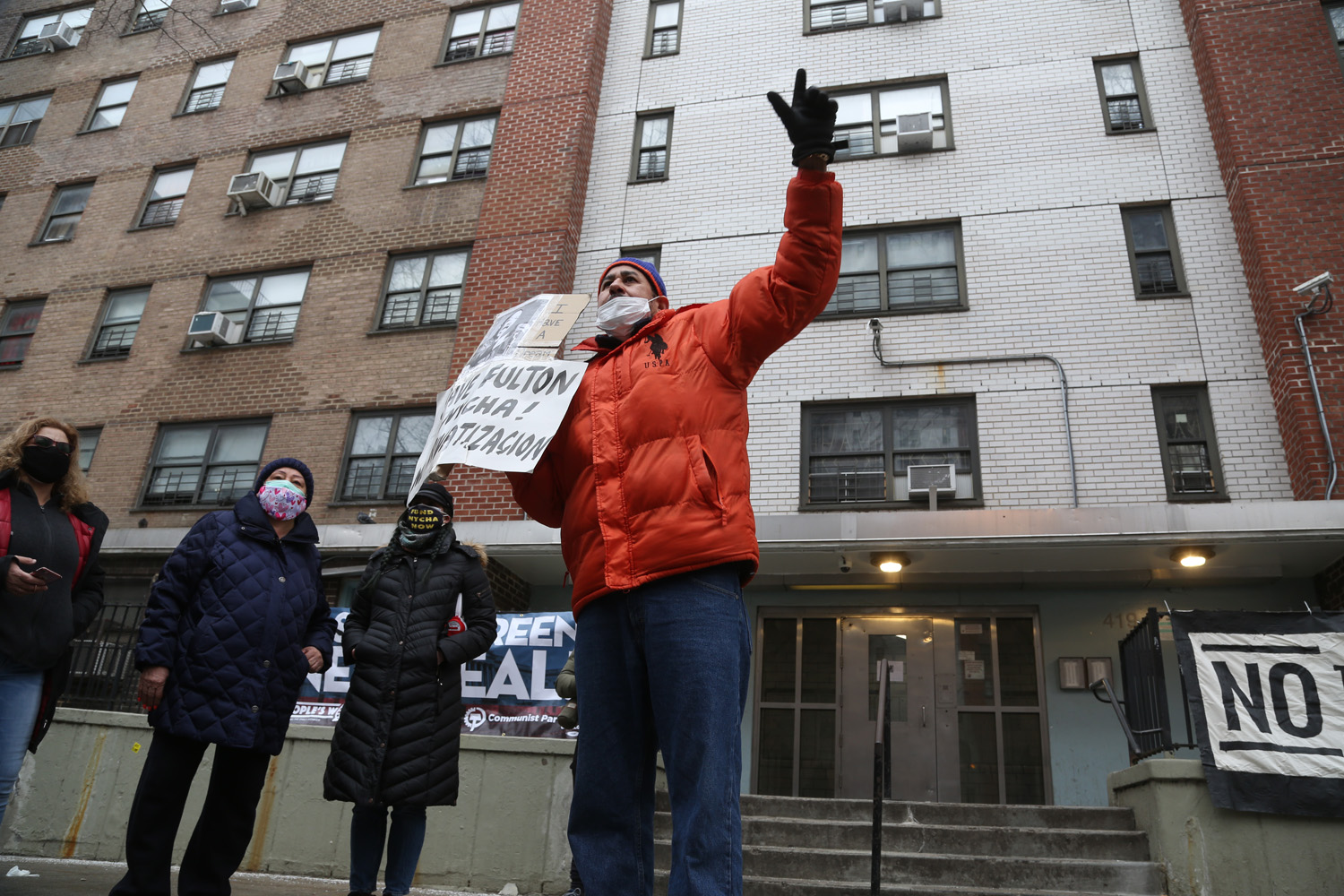 That’s what a group of residents of the Robert Fulton Houses in Chelsea said Sunday at a rally attended by City Council candidate Marni Halasa.

The embattled RAD plan to raze two low-scale buildings at the Fulton Houses, replacing them with two towers containing market-rate and low-income residents is reportedly now off the table — at least in terms of the demolition aspect.

What is on the table now is something called PACT/RAD — “PACT” standing for Permanent Affordability Commitment Together.

According to a FAQs sheet on the initiative, the PACT/RAD plan would involve 62,000 New York City Housing Authority apartments. It would not be privatization per se, according to the agency.

“No, this is a public-private partnership,” the page explains. “NYCHA will enter into a long-term ground lease with a development partner that will repair and manage the development.”

Under another plan, Blueprint for Change, the remaining 110,000 Housing Authority apartments would be transferred into a newly created public entity called the Public Housing Preservation Trust. A nonprofit public-benefit corporation, this trust, created through state legislation, would have a long-term ground lease, which would allow it to raise money for major repairs. The complexes would be converted from the Section 9 program to Section 8.

No residents would be asked to move or be displaced under either plan, according to the city.

Halasa said while Fulton Houses and Elliott-Chelsea tenants were allowed into meetings of the Mayor’s Chelsea NYCHA Working Group, her group of activists and tenants from other NYCHA developments were not. After sneaking into several meetings, she and other activists were banned from the working group after Halasa claims they were promised by Manhattan Borough President Gale Brewer’s office that they could attend. Police officers were then stationed at entrances at P.S. 33 and the the Hudson Guild, where the working group meetings were held. Halasa charged that excluding anyone violated the New York State Open Meetings Law.

After Sunday’s rally, Halasa once again took a pop at one of her primary-election opponents, Erik Bottcher, Council Speaker Corey Johnson’s chief of staff.

“Why do Erik Bottcher and the rest of the elected officials stand with tenants of 308 W. 30th St., who have been harassed by their landlord, but refuse to help the nearly 6,000 black and brown tenants of Fulton, Elliott-Chelsea and Harborview developments in District 3 who will experience displacement since RAD is an eviction machine?” she said.

“Fulton tenants have 636 signed petitions against privatization. They have been protesting for nearly two years. Who makes the decision on which tenants to advocate for? The elected officials do. They have a seat at the table and do nothing. And I can’t help but think that race is a big part of it.”

In 2019, the group Fight for NYCHA raised a cry against RAD, including protests at Speaker Johnson’s Chelsea home, at City Hall and at NYCHA’s offices. The organized opposition seems to have worked, at least partially, since the demolition part of the scheme has been scrapped.

Under the hotly debated proposal, two of the low-scale buildings at the Fulton Houses, each with 36 apartments, would have been razed. In their place would have risen a pair of new 70-percent-market-rate towers built by private developers. The displaced NYCHA tenants would have been moved into another new building to be built on a basketball court on the Fulton grounds.

At a town hall meeting in December 2019, Mayor de Blasio admitted the reason Chelsea was targeted for the project was due to the hot neighborhood’s high property values. He said RAD was critically needed to help fill the New York City Housing Authority’s gaping budget deficit, which then stood at a staggering $32 billion.

The Rental Assistance Demonstration a.k.a. RAD program was created by the Obama administration because, as the mayor put it, “all across the country there was no money” for public housing.

Before the pandemic hit, NYCHA’s plan over the next decade was to do RAD conversions with one-third of its property portfolio throughout the city, or 62,000 units. These conversions would address $12.8 billion of the authority’s deficit, according to the agency. In the process, the complexes would be converted from Section 9 to Section 8, so they could use private funding.

Under the city’s Chelsea RAD plan, $344 million would have been raised for full renovations for the Fulton Houses, as well as the nearby Elliot-Chelsea Houses. Heating systems would have been upgraded, new roofing and elevators installed and apartments renovated. Some of the buildings date back to the 1960s and even ’40s.

But residents were suspicious of the scheme and any talk of demolition and shifting residents around, as well as the possibility of privatization.