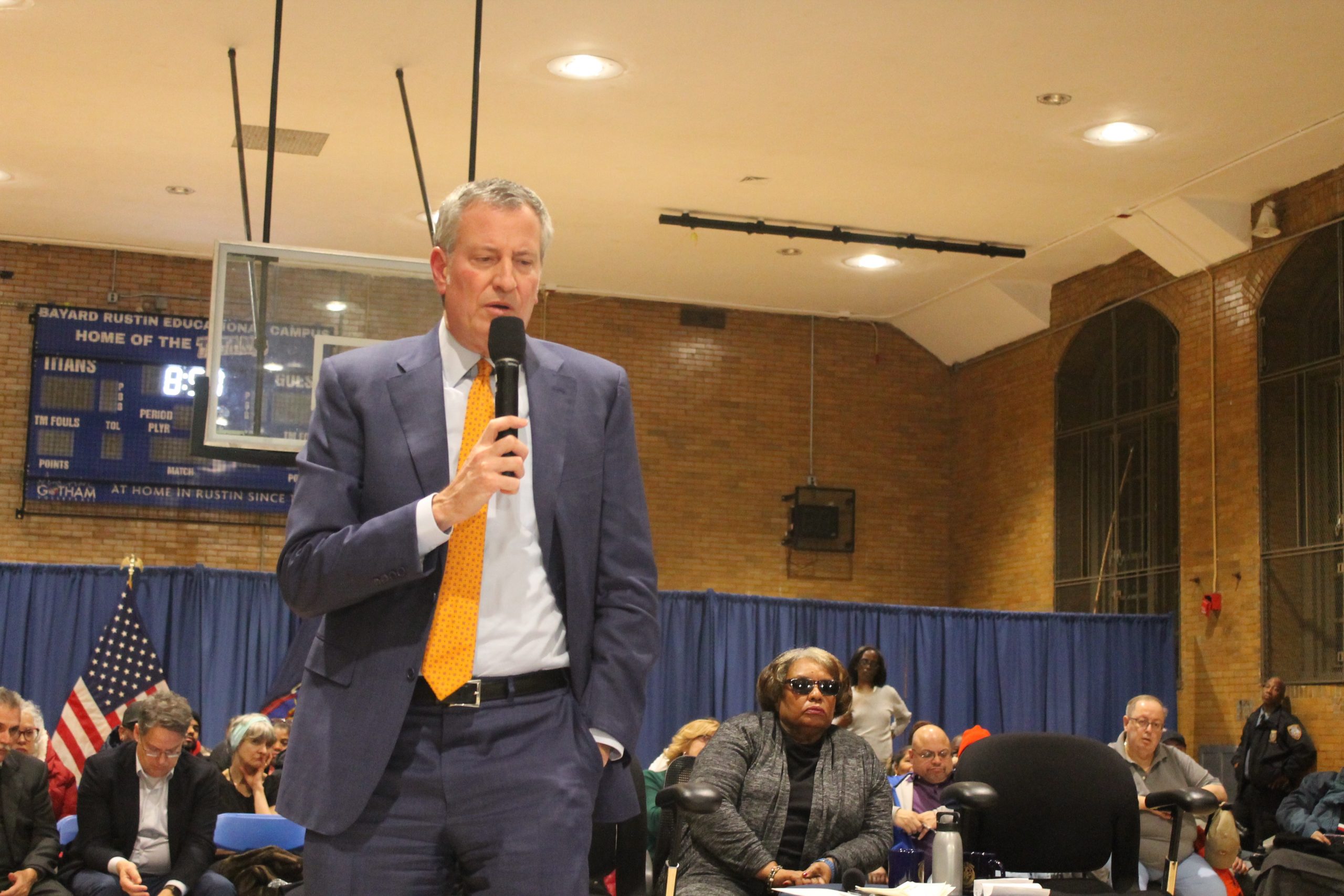 BY LINCOLN ANDERSON | Chelsea public housing tenants gave Mayor de Blasio an earful — and then some — at a town hall last Thursday on the so-called “RAD” plan.

Under the hotly debated scheme, two of the low-style buildings at the Robert Fulton Houses, each with 36 apartments, would be demolished. They would be replaced with a pair of new towers built by developers that would be 70 percent market rate. The displaced tenants would move into another new building to be built on a basketball court on the Fulton grounds.

The plan would not amount to full privatization but would be a “public-private partnership.”

As he led the meeting in a theater-in-the-round layout style, De Blasio faced an often-hostile crowd at the Bayard Rustin Educational Complex, at 351 W. 18th St. Joining him at center stage were Miguel Acevedo and Darlene Waters, the respective presidents of the Fulton Houses and Elliot-Chelsea Houses.

De Blasio eventually admitted to the tenants that the reason Chelsea was picked for the project was due to the hot neighborhood’s high property values. He also said this plan is the only one his administration has right now to help fill the New York City Housing Authority’s gaping $32 billion budget deficit — meaning the amount of repairs NYCHA needs all around the city.

Federal disinvestment in NYCHA, he said, is what “created the whole landslide.” The authority only gets $500 million annually from Washington.

Rental Assistance Demonstration a.k.a. RAD came out of the Obama administration because, as the mayor put it, “all across the country there was no money.”

NYCHA’s larger plan over the next 10 years is to do the RAD conversion with one-third of its property portfolio throughout the city, transferring a total of 62,000 units to private owners. These conversions would address $12.8 billion of the authority’s deficit, according to NYCHA. The complexes would also be converted from Section 9 to Section 8, allowing them to use private funding.

Under RAD, $344 million would be raised for full renovations for the Fulton Houses, as well as the nearby Elliot-Chelsea Houses. Heating systems would be upgraded, new roofing and elevators would be added and apartments renovated. Some of the buildings date back to the 1960s and ’40s.

A working group, assembled to include more community input on the Fulton / Eliot-Chelsea project, is winding up its discussions, and the mayor was clearly pushing at last week’s town hall to move the project forward.

“The decision must be made in the next few weeks,” he emphasized, at one point. Later on, he said that, since he is term-limited in two years, he wants to “lock in” the RAD plan now since there’s no telling what future mayors will want to do.

But residents were suspicious of the plan and any talk of demolition.

Speaking at the meeting’s outset, Manhattan Borough President Gale Brewer said a nonprofit should be brought in to manage the complexes if the RAD plans goes forward.

“We are zeroed in on these two developments,” she said. “What happens here could happen everywhere. Whatever happens, I would like to have a nonprofit property manager [and] a public process to evaluate whatever emerges.”

State Senator Brad Hoylman apologized to the crowd for the current state of NYCHA.

“There is no more important issue than fixing public housing,” he said. “In Albany, we have let you down…decades of dereliction. This is an incredible public asset and we have to protect it.”

Council Speaker Corey Johnson, whose district contains the two public-housing complexes, did not attend the meeting. He was represented by Erik Bottcher, his chief of staff, who did not address the audience.

T.A. President Acevedo, who supports the proposal to update the Fulton Houses aging infrastructure, urged the tenants to unite.

“The only way it works,” he said, “is if we move forward as one group to protect public housing.”

“We’re tired of putting a band-aid on everything,” she said. “It needs to be fixed. We’re working people. We can’t stay home all day to wait for repairs. We want to make sure this gets done right.”

De Blasio started off by referencing the holiday season, noting that people’s homes take on even more meaning at this time of year during family gatherings.

“Your home needs to be protected,” he said. “The status quo is not fine.”

“Leave it the way it is!” a woman called out.

The mayor admitted there is “tremendous skepticism” of government nowadays, from the federal government on down.

“We’re going to do everything we can to get nonprofit management,” he vowed, “because I believe in the plan.

“The dirty word is ‘privatization,’” he added. “Public housing must be preserved for the long haul. We’ve got a $32 billion problem. We have to protect NYCHA as public housing for decades to come.”

De Blasio touted the Ocean Bay Houses, in the Rockaways, where RAD was recently used to completely renovate the complex. A similar RAD-fueled rehab is currently occurring in the Bronx at the Betances Houses.

Lenny Rosado, the Fulton Houses T.A. vice president, said renovated kitchens and elevators are all well and good, but that residents’ biggest fear is “safety and security,” meaning whether they and/or their families would still be able to continue living there 30 or 40 years from now. Rosado said he was worried about a potential “loophole” in the RAD plan that could affect who could live there down the line.

De Blasio assured him that each tenant would sign “an individual document,” giving full rights.

Hector Vazquez, a member of Community Board 4 who is on the Elliot-Chelsea T.A., said the buildings are plagued by quality-of-life problems and are in need of immediate help.

“There’s a lot of drug dealing, a lot of crapping and urinating,” he complained.

Another tenant complained about “marijuana smell” in the buildings’ hallways, which affects people with asthma and other respiratory ailments.

The mayor said, ultimately, a major overhaul under RAD is ultimately what is needed.

“There’s a point where the buildings are uninhabitable,” he said. “Unless there’s a huge infusion of money, we’re all screwed.”

The commanding officer of the Manhattan South Precinct added that his counterpart in Brooklyn informed him that the Ocean Bay Houses are now much safer since the RAD rehab, which included new locks on building doors.

Some tenants slammed de Blasio for not finding the needed funds without resorting to RAD. Linda Ocasio, a 43-year Fulton resident, called the mayor out for his previous statement when he said, “There is plenty of money out there, it’s just in the wrong hands.”

“I need to know where the money is and why are we still suffering like this?” Ocasio said.

“I was talking about our country and all the money that’s in the hands of the 1 percent,” de Blasio clarified.

Mary McGee, a Fulton Houses activist, said if contractors would just do their work better the first time around, they wouldn’t have to keep redoing it and it would save a lot of money. She said the tenants should not have to endure RAD just to get their housing up to snuff.

“You’re the landlord,” she flung at the mayor. “At the end of the day, it’s your responsibility.”

Another tenant suggested the project be relocated to a Bronx public-housing development that has more land for adding new towers. However, de Blasio said the Fulton Houses site offers the better expected return.

“These specific buildings benefit from being in a place where we can get that value,” he explained. “If you can build a bigger building, you can bring in a huge amount of revenue. If you don’t do this, the status quo continues.”

A bit later, a woman asked basically the same question: Why Chelsea?

“You can generate revenue other developments can’t,” the mayor told her.

Jackie Lara, who lives in Fulton Building 1 — one of the two buildings slated for demolition — and who had been heckling the mayor throughout the meeting, said her place is fine.

“There’s nothing wrong with my apartment,” she protested, adding, “You know you can fix it, you’re lying.”

“Either you want to look at a plan that will fundamentally improve people’s lives or you don’t,” de Blasio told the crowd. “And if you want to walk away from the opportunity, I don’t have another one.

George Weaver, another public-housing tenant, said that, according to Congressmember Nydia Velazquez, “the $32 billion is there.”

Local activist Marni Halasa later said a bill the congressmember is backing contains $70 billion, including the above-mentioned funds for NYCHA.

De Blasio said Velazquez has never told him that, though, if she does believe she can find that massive sum, he’s “happy to have that discussion with her.”

Speaking to The Village Sun afterward, Assemblymember Richard Gottfried said he thought the mayor did admirably given the heated emotions in the room.

“I think the city has a tall agenda to convince the residents that their rent levels and rights will be firmly protected,” Gottfried said. “There’s absolutely a lot of skepticism.”

The assemblymember said the working group, on which he has a representative, has been looking at “various funding options” to give Fulton and Elliot-Chelsea the needed repairs.

“The goal of the working group is to come up with a plan that is feasible quickly and has all the right protections for tenants,” he said. Those protections could include things like taxes, selling air rights and building on open spaces on public-housing grounds.

The question at Fulton Houses, Gottfried said, is the later: If there is space for “infill” housing, meaning constructing new buildings on currently open space, instead of demolishing existing structures.

Community Board 4, for one, is on record supporting renovating the Fulton Houses but without any demolitions.

“The mayor wanted it done earlier,” Gottfried said of the working group’s pending recommendations. “We pushed the city to give us until late January. I think we can do that. We’ve been meeting several times a week.” 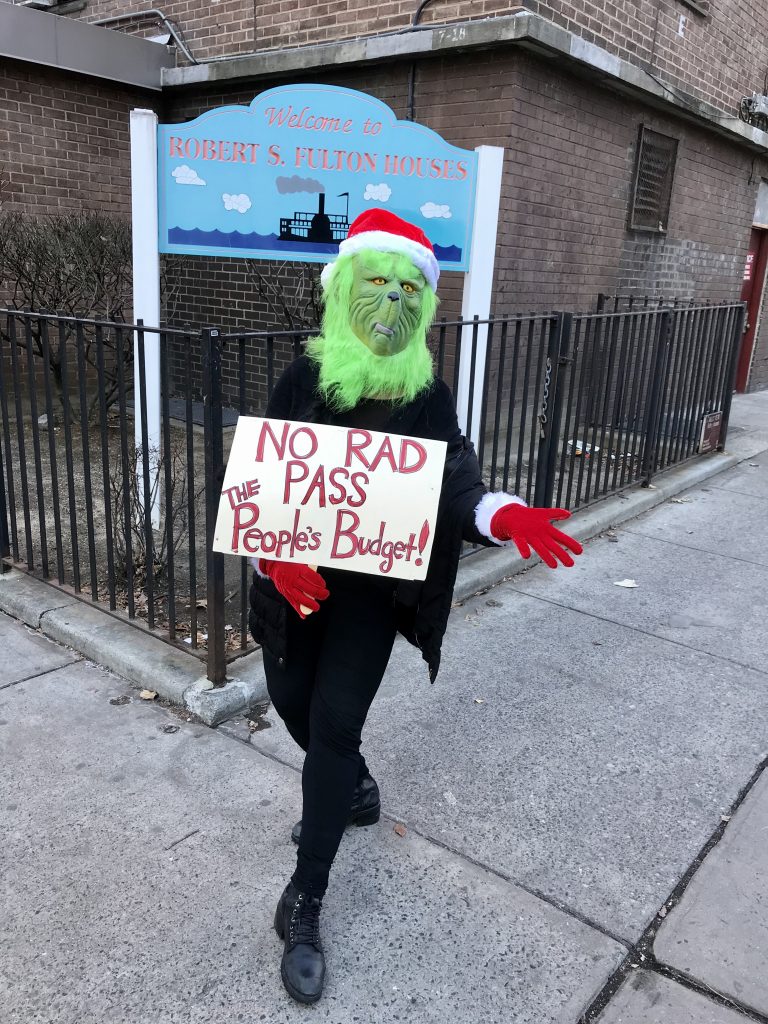 Meanwhile, activist Halasa said tenants recently filed a federal lawsuit under the Open Meetings Law demanding that the working group’s meetings, which are closed, be open to all.

After the meeting, Halasa’s group Community Control of Land Use New York, or CCLUNY, called out Corey Johnson for missing the town hall:

“WHERE WAS @NYCSpeakerCoJo LAST NIGHT AT @NYCMayor TOWNHALL? He was IN HIDING bc @nycha tenants [are] on the warpath v any privatization!”

Halasa plans to run as a Democrat to succeed Johnson, who will be term-limited at the end of 2021.

A Johnson spokesperson issued the following statement to The Village Sun:

“Speaker Johnson believes any plan to address the capital needs of NYCHA Fulton and Elliot-Chelsea Houses should be the product of a community-led conversation. At Speaker Johnson’s urging, the NYCHA Chelsea Working Group was established. This group — comprised of a wide range of stakeholders and centered around tenants of Fulton and Elliot-Chelsea Houses — is making good progress in evaluating all options on the table, and he looks forward to seeing their recommendations.”

As for Johnson’s whereabouts last Thursday night, according to a source, he had a lot of commitments and so was unable to make it.