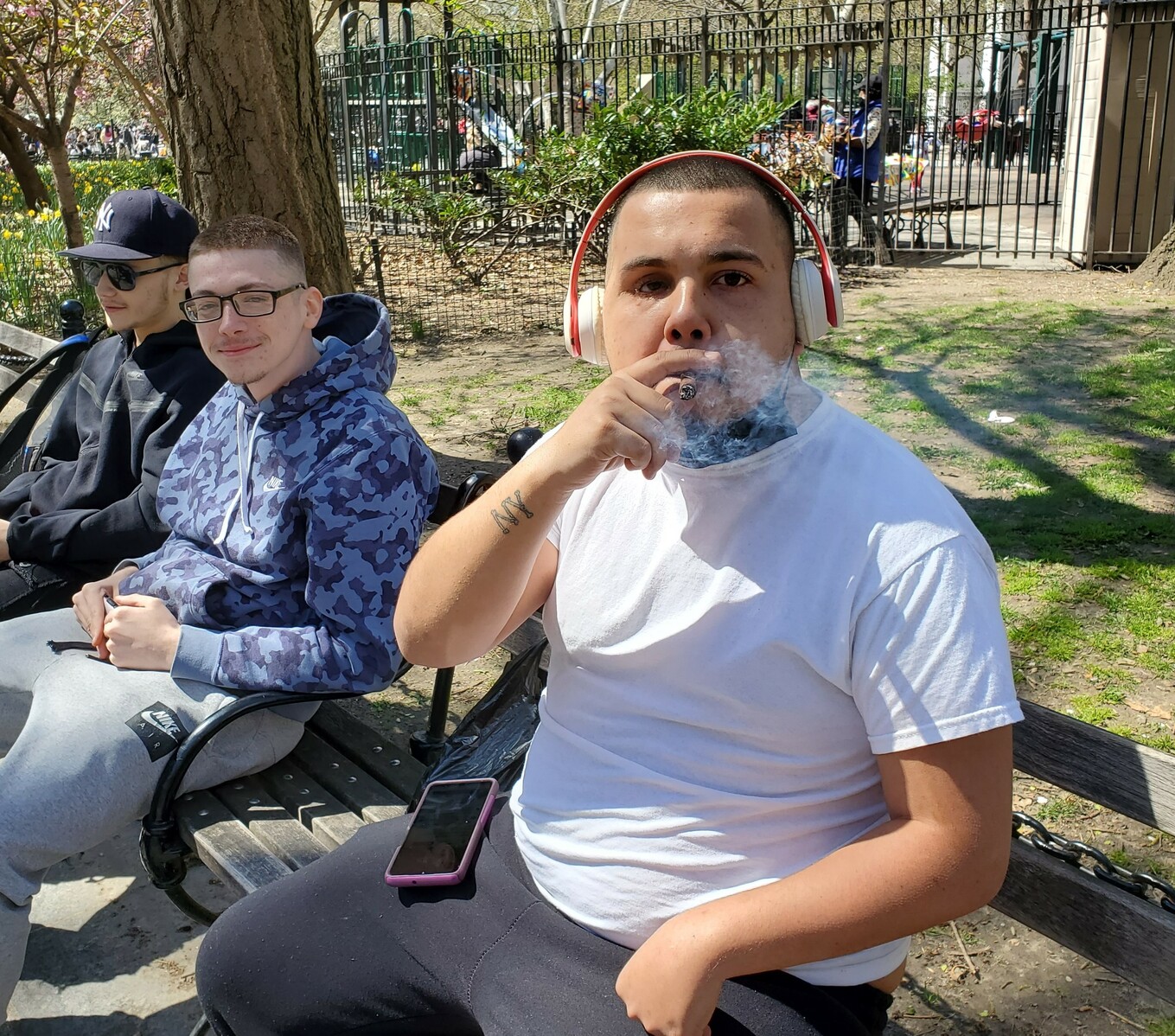 Henry Romano enjoyed a joint in Washington Square Park on 420 Day. (Photo by The Village Sun)

BY LINCOLN ANDERSON | Were they high?

A group of pot vendors in Washington Square Park on 420 Day last Wednesday claimed to The Village Sun that they had secured a one-day vending permit from the Parks Department. It wasn’t clear what they may have been smoking, but that wasn’t the case.

Megan Moriarty, a Parks spokesperson said, “We didn’t issue any permits for the park for April 20, 2022.”

Captain Stephen Spataro, the Sixth Precinct’s commanding officer, said he, too, was sure that no vending permits had been issued for the park for that day. In general, vending is illegal in the park.

“Almost certainly no one was issued a permit to vend,” the captain said. “There would be an event permit — not for vending. And I don’t know of any event that applied for 420 activity.”

The C.O. noted that police are continuing their new “zero tolerance” policy on pot vending in the park and that it’s having the desired effect. However, he admitted that on 420 — which pot smokers think of as a “national holiday” — police were overwhelmed by the number of weed puffers and sellers.

“The crowd was enormous,” he said, “a lot of people smoking. It was a tactical decision. We weren’t enforcing like we do every day.”

However, he said, police the very next day were out once again doing their cannabis crackdown in the park. The ganja entrepreneurs selling from tables around the park’s fountain plaza quickly get the hint when police start enforcement, he said.

“It’s a combination of giving a summons and seizing property from one person — then the rest will scatter,” he said.

“If they spot officers, now they take off,” he said. “They just step off.”

Spataro said he’s eager for legal pot dispensaries to open, which he expects would take pressure off Washington Square Park as a “gray market” cannabis casbah. As previously reported by The Village Sun, a crew of armed robbers stole one weed vendor’s goods at gunpoint earlier this year and tried to stick up another but he fled.

Post-pandemic, policing is changing, he noted.

“The police officers, as a whole, are shifting back to enforcing quality of life again,” Spataro said.

Closing the park at its midnight curfew has not been an issue lately, he added.

Speaking of closing, the Parks Department, as of last week, started closing off the Greenwich Village park’s northwest corner, which is a nexus for hard-drug use. However, it’s not a total closure as Parks is programming the corner for “positive uses,” like kids’ activities, he said.

Spataro said the drug users, as usual, had been gravitating to the sketchy corner until the recent decision to close it down.

“They start setting up at 6 a.m. there sometimes,” he said.

Enforcement against hard drug use in the park is more difficult now, he previously told The Village Sun, since, due to a change by the state Legislature, police can no longer arrest heroin users for possessing a syringe with heroin residue in it — they can only arrest them before injecting — while the Manhattan district attorney no longer is prosecuting people arrested for possessing a crack pipe with residue in it.

In addition, also on the subject of closing, Spataro noted that, courtesy of the Washington Square Park Conservancy, the police now have some chains that they are using to chain together the “French barriers” that close the park’s entrances overnight. The bound-together movable metal gates are then chained to the fence posts of the wrought-iron fence that encircles the park.

Previously, plastic ties were used to link the French barriers together. But, according to the Village top cop, on a regular basis someone was either cutting or burning the ties, allowing the gates to be moved around and the entrances opened overnight.

Now, though, when the gates are deployed, it’s clear that the park entrances are closed, he noted.

“So now when you go over the fence, you know it,” Spataro said. “It’s fair to everyone involved.”

Asked if he’d like to see more substantial, permanent gates installed at the park’s enrtrances, Spataro said yes, and noted that the blueprint for the park’s most recent reconstruction — which occurred from 2008 to 2014 — did include them.

“I’m very strongly in favor of it,” he said of full-on gates. As for the current French barriers, he said, “I think they’re unsightly. People could trip over them.”

The entire park is encircled by a waist-high, wrought-iron fence. During the review of the plans for the park’s reconstruction, Community Board 2 Parks Committee meetings saw passionate debates on how high the fence should be, whether there should be permanent gates installed at the entrances and the history of Washington Square Park as an “open park.”